How Attached to the Labor Market Are the Long-Term Unemployed? -Liberty Street Economics

We use longitudinally linked micro data on workers from the Current Population Survey (CPS) to compute transition rates for four different labor market statuses into employment and nonparticipation. The CPS, produced by the Census Bureau and the Bureau of Labor Statistics, is the U.S. government's monthly survey used to estimate unemployment and labor force participation. Respondents participate for two four-month periods exactly one year apart. The probability that a short-term unemployed worker finds a job and is employed one month later can be computed simply as the fraction of the short-term unemployed in a given month who, in the next month’s survey, report that they are employed. Using this method, one can compute monthly and annual flow transition probabilities for the short- and long-term unemployed as well as for those in two categories of nonparticipation: those who report they want a job and those who report they do not want a job (whom we refer to as “other nonparticipants”) for each month. 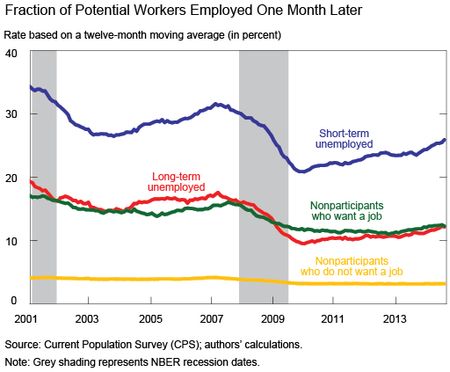 Despite their sluggish recovery in the aftermath of the Great Recession, monthly transition rates into employment are still quite high for both the short-term and the long-term unemployed. For example, a 12 percent job-finding rate for the long-term unemployed would suggest that around 80 percent of the long-term unemployed find employment within a year. However, annual transition rates (from being unemployed to having a job one year later) in the CPS are considerably lower than those implied by the monthly transition rates, as documented in Krueger, Cramer, and Cho (2014). Part of this difference might be the result of not having any information about the labor market experiences of CPS respondents during the eight months between the two sets of interviews. They could have found jobs and lost them, possibly even more than once. 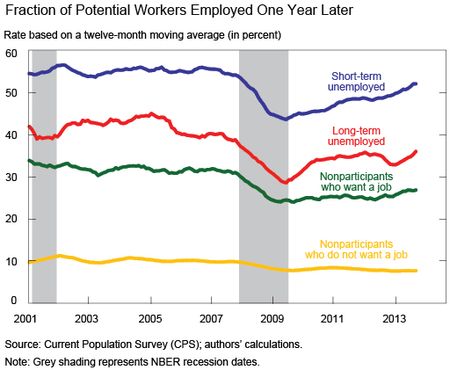 Krueger, Cramer, and Cho argue that these findings imply that the long-term unemployed are not successful in finding stable employment. We offer a different interpretation. Our study of transition rates for the short-term unemployed before and after the recession shows that, even for these workers, annual transition rates have been around 50 percent. This suggests that the discrepancy between monthly and long-term transition rates is not specific to the long-term unemployed and is more likely to be the consequence of the type of jobs that unemployed workers (short- or long-term) typically find: short-term jobs and/or part-time jobs, and jobs with high turnover. The chart below shows that conditional on finding a job, both the short-term and long-term unemployed had slightly below a 50 percent chance of finding full-time jobs in the past few years, much lower than the rate for workers in full-time jobs in the U.S. economy (around 81 percent). See comments by Abraham (2014) and Shimer (2014) (pages 281 and 287 of the PDF, respectively) for a more detailed discussion of the differences between monthly and annual transition rates. 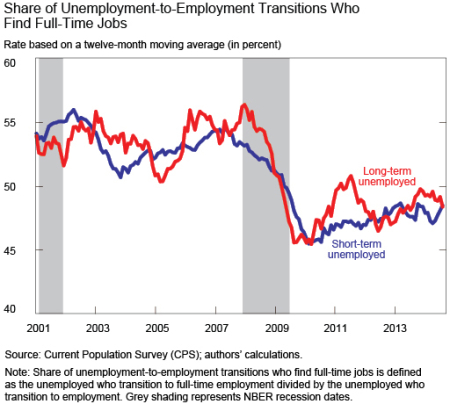 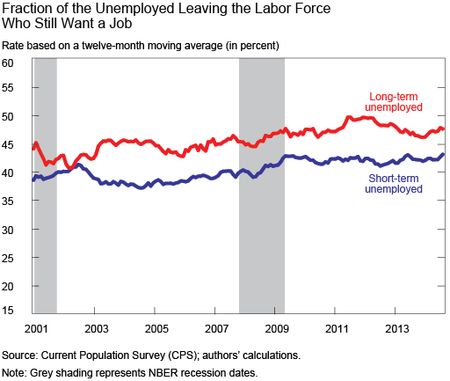 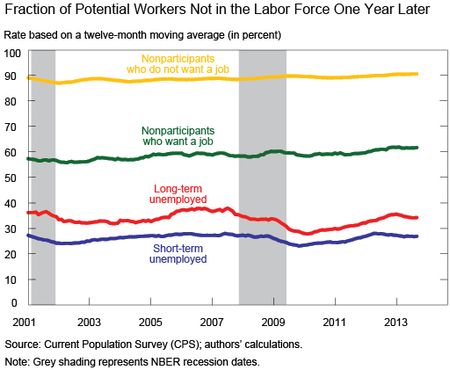 Ayşegül Sahin is an assistant vice president in the Bank’s Research and Statistics Group.
Posted by Blog Author at 07:00:00 AM in Employment, Labor Economics, Labor Market, Macroecon, Unemployment, Wages

Very interesting post. I particularly thought chart 3 (Rate at which long and short term unemployed find full time jobs) was interesting. The overall rate at which unemployed persons find jobs (U->E transition rate) has increased quite meaningfully recently but chart 3 does not show this same trend. Does this suggest that the recent increase in the overall probability of re-employment (U->E rate) has been driven by an increase in the unemployed taking part time jobs? Thanks.