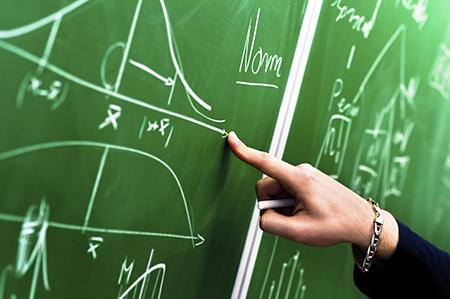 As an economist, you make policy recommendations at any point in time that depend on what model of the economy you have in mind and on your assessment of the state of the economy. One can see these points play out in the current discussion about the timing of interest rate liftoff and the speed of the subsequent renormalization. If you think nominal rigidities are not all that important, you are likely to conclude that accommodative policies won’t do much for growth but will generate inflation. Similarly, if you are convinced that the economy is already firing on all cylinders, you may see little need for prolonged accommodation. The problem is, you are not quite sure about the state of the economy or what the right model is. If you are a Bayesian, you may want to try to put probabilities on different models/states of the world and take it from there. The first post in this series, “Combining Models for Forecasting and Policy Analysis,” introduced a procedure called dynamic pools that shows how to do just that. In this post, we apply that procedure to a policy exercise. We can’t publicly discuss current policies, so we will instead apply our method to consider alternative monetary policies at the onset of the Great Recession.

Imagine that in the immediate aftermath of the Lehman crisis, the central bank announced a change in its interest rate policy, making the path of the policy rate contingent on the recovery in the labor market. This experiment essentially contemplates anticipating, by almost four years, the language of the September 2012 statement linking the policy instrument to the “outlook for the labor market.” We assess the impact of this counterfactual policy on the two models discussed in our previous post, one with financial frictions and one without. Both are New Keynesian models but they have radically different assessments of the state of the economy, mostly driven by the fact that the former makes use of the information arising from the post-Lehman increase in credit spreads, while the latter does not.

The projections for the economy made with information available on January 10, 2009, shown in the chart below, give us an idea of the quantitative differences between the two models. (Note that these projections use data up to the third quarter of 2008). The left and right panels show the forecast distribution for output growth and inflation, respectively, over the next four quarters (that is, the average output growth and inflation from the fourth quarter of 2008 to the third quarter of 2009). For each model, the forecast is not just one number (a point forecast) but an entire distribution, which reflects the uncertainty about the current state of the economy, the model’s parameters, and the future shocks that may hit the economy. The top panels show the forecast distributions for the model with financial friction (called SWFF), while the middle panels show the forecast distributions for the model without friction (called SWπ).

Let’s first focus on the blue lines, which show the distribution under the “usual” Taylor-type interest rate rule (i.e., the one estimated using historical data). It is pretty clear that the SWFF model foresees a recession and inflation that is significantly below the Federal Open Market Committee (FOMC) long-run objective of 2 percent. The mode of the forecast distribution for average output growth in the next four quarters is less than -2 percent, and most of the mass is between -4 and -2 percent, while most of the mass for the forecast distribution of inflation (as measured by the GDP deflator) over the same period is between zero and 1 percent. For the SWπ model, on the other hand, everything is just fine, as was also shown in our previous post. The economy is projected to grow at about 5 percent per year, with most of the mass above 4 percent, and inflation is projected to be right on target (recall that we are looking at the blue lines). 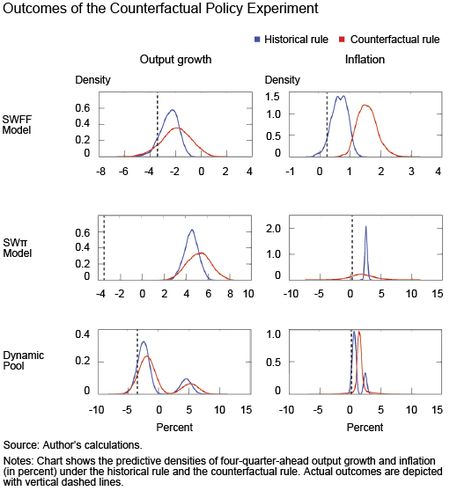 It’s not surprising that monetary policy has different implications depending on which model you trust. Let’s now model policy as being driven by deviations in per capita hours—which capture both when people are out of a job and when they remain employed but work less—from the long-run average. The financial friction model has more policy accommodation because the model predicts that the economy is going to be depressed for a while under the historical Taylor-type policy rule. The counterfactual policy (the red line) shows that the recession will be much milder and that inflation will stay close to target, if we assume that the SWFF model is the right one.

Under the SWπ model (middle panel), the new policy rule also produces slightly stronger growth (which is not needed since the economy was already doing fine under the historical rule) and, most importantly, a counterfactual distribution of inflation that is very spread out.

To understand this surprising result, one has to know a few more things about the SWπ model. This model is a very close cousin of the one of Smets and Wouters (2007). King and Watson (2012) show that cost-push shocks—shocks that push inflation and economic activity in opposite directions—play a very large role in the Smets and Wouters model, and they do so similarly in SWπ. Under cost-push shocks, policies that respond strongly to the level of economic activity, such as the counterfactual policy we consider here, do pretty poorly in terms of inflation outcomes (for example, see Chung, Herbst , and Kiley [2014]). The intuition is that these policies accommodate the cost-push shock until its effect on activity is gone, but in doing so produce substantial inflation.

So, the alternative policy rule tied to the labor market is a great idea under one model and a risky proposition under the other. It is pretty clear in hindsight which model had a better grip on reality. The vertical dashed lines show the actual realizations of output growth and inflation. These lie far in the tail of the forecast distributions for the SWπ model, showing that this model had both estimates badly wrong (as documented in our previous post). Of course you wouldn’t know that in real time. The dynamic pool procedure provides you, in real time, with a distribution of the weights for these two models. The bottom two panels of the chart use this distribution to project what would happen under the alternative policy.

Two comments are in order. First, the forecast distributions for both inflation and output have two humps, reflecting the fact that they are weighted averages of those of the two models. However, the hump associated with the SWFF model is much taller, indicating that our procedure puts most of its weight on this model as of the third quarter of 2008. Second, under the alternative policy, the distribution of output growth shifts to the right, but the distribution of inflation becomes very fat-tailed, with a mode around 2 percent. So what do we make of all of this? The answer is, it depends on what you care about and how risk averse you are. If you care a lot about inflation and are very risk averse, you may not want to adopt the alternative policy. This is even truer if you adopt a robust control approach.

In the end, we have shown that policy analysis in the very oversimplified world of DSGE models is a pretty difficult business. Contrary to what it may sometimes appear from listening to talking heads, deciding which policy is best is very rarely a slam dunk.

Interesting. I'm wondering if your models can predict the next few years what will happen as federal fund rates start to appreciate. We've never seen such easy monetary policy for such a long time. Yet inflation (CPI) has been held in check. One has to ask, "Where has all the money gone?"

I would draw an analogy to costs in business. Costs can be consumed in O&M or in capital expenditures. Analogously, economy costs driven by easy monetary policy can move into either consumables (including labor costs) or assets. It has to do with risk. With such easy money, more risk is taken with assets. But as monetary policy tightens, the risk goes up such but there is a window where the risk of labor is now in scope and money flows into labor, with a corresponding, but delayed, jump in the CPI and inflation.

I'm wondering if, when the policy of appreciating federal fund rates happens, might we reach a dangerous sweet spot where assets no longer get funded but now consumables and, especially labor, start to get juiced. As the policy tightens, we reach a point where money actually flows more freely into the economic consumables rather than the assets because of increased, but not substantial, risk.

We might see a fire lit in inflation at the .75-1% federal funds rate that might not be put out until a lagging funds rate is finally hit at a much more elevated level than would be desirable. And we would see a corresonding puncture of asset bubbles. Late 70's era stagflation?