The Eurodollar Market in the United States -Liberty Street Economics

« Why Are Interest Rates So Low? | Main | Just Released: What Do Banking Supervisors Do? »

The Eurodollar Market in the United States 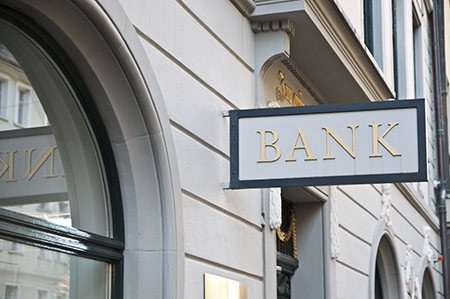 In February, the Federal Reserve Bank of New York’s trading desk announced it will publish a new overnight bank funding rate early next year. The new rate will be based on both federal funds and Eurodollar transactions reported in a new data collection—the FR 2420 Report of Selected Money Market Rates. In a previous post, we explained how FR 2420 fed funds transaction data will replace brokered data as the base for the fed funds effective rate. This post provides insights on the Eurodollar market in advance of the publication of the overnight bank funding rate.

U.S.-based banks can also take Eurodollar deposits domestically through international banking facilities (IBFs). However, Caribbean Eurodollar activity is estimated to be much larger than IBF Eurodollar activity because of regulatory limitations on IBFs. For example, IBFs can only take Eurodollar deposits from foreign institutions and have additional restrictions for foreign corporate depositors. In contrast, Caribbean branches of U.S.-based banks can also take deposits from U.S. institutions and have no restrictions on foreign corporate depositors.


Rates and Volumes in the U.S.-Brokered Eurodollar Data
The Fed monitors and analyzes the Eurodollar market as an important overnight funding market for U.S.-based banks. The Fed has traditionally collected fed funds data from U.S.-based brokers and started collecting Eurodollar data from the same brokers in 2010. According to these data, the overnight brokered Eurodollar market is around three to four times larger than the overnight brokered fed funds market. The average daily volume of Eurodollars borrowed overnight through the brokers in the past year was about $140 billion, and, with the exception of quarter ends, the amount is fairly stable from day to day.

As the chart below shows, most borrowing in the brokered Eurodollar market occurs close to the volume-weighted median rate, with more than 80 percent of daily volumes within one basis point. There isn't usually much borrowing at either tail of the distribution, unlike the fed funds market where some institutions borrow at significantly higher than average rates, above the interest rate paid by the Fed on excess reserves. This difference likely reflects that smaller institutions do not typically have access to the Eurodollar market and borrow from other banks in the fed funds market instead. 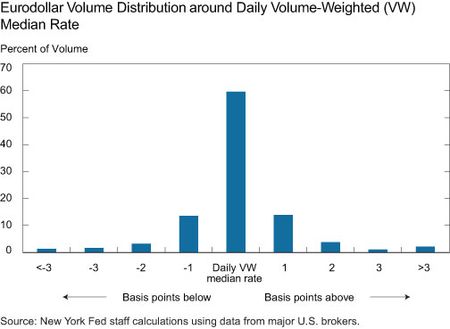 Since Eurodollars and fed funds are close substitutes as funding sources, their rates as calculated from brokered transactions data normally track each other closely (see chart below). Recently, overnight Eurodollar rates have been slightly higher than fed funds rates, with the volume-weighted median Eurodollar rate usually about one basis point higher than the volume-weighted median fed funds rate. Minor differences in the median rates occur because of different borrowers and lenders active in the two markets; at times, these differences can be more pronounced, such as during the financial crisis. 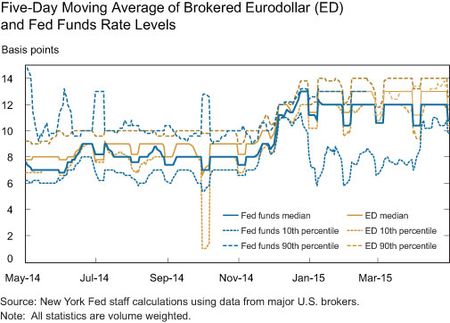 Eurodollar Data in the FR 2420
The Fed launched a new data collection in April 2014, the FR 2420 Report of Selected Money Market Rates, which includes information on transaction-level borrowing in fed funds, Eurodollars, and certificates of deposit. These data are collected directly from the banks that borrow in Eurodollars and, as such, capture both transactions intermediated by brokers and those negotiated directly between two counterparties. Currently, the FR 2420 captures a modest percentage of U.S.-based Eurodollar deposits—that is, only offshore borrowing by U.S. depository institutions, but not by U.S. branches of FBOs or by IBFs.

The Fed recently proposed changes to the FR 2420 that should increase its coverage of the Eurodollar market. It is estimated that the recommended panel of banks would include ninety-four U.S. depository institutions and seventy-eight FBO branches. Additionally, U.S. branches of FBOs would be required to report Eurodollar borrowing of offshore branches that they directly manage and control. All reporting institutions would also be required to include Eurodollar borrowings of their IBFs. The proposed revisions to the FR 2420 data, which are expected to be implemented later this year, will provide greater insight into the U.S.-based Eurodollar market by capturing a higher proportion of Eurodollar activity.

The revised FR 2420 data will be used to construct the new overnight bank funding rate. This new rate will have a larger transaction base than the fed funds effective rate, since it will be calculated on both fed funds and U.S.-based Eurodollar transactions. As a result, it will provide a broad measure of overnight funding costs for U.S.-based banks and complement the fed funds rate.

Julia Gouny is a policy and market analysis manager in the Bank’s Markets Group.
Posted by Blog Author at 07:00:00 AM in Exchange Rates, Fed Funds, Financial Markets, Monetary Policy