The Discount Window’s Tradition against Borrowing
The Fed was established in 1913 to create an elastic money supply that would expand to meet high demand for liquidity during times of stress and contract once conditions improved. At that time, there were no open market operations (the buying and selling of government securities in the open market) to conduct monetary policy. Instead, the Fed adjusted the money supply by lending directly to banks through the DW. During these initial years, the DW was used extensively, and there appears to have been no mention of stigma attached to DW borrowing. 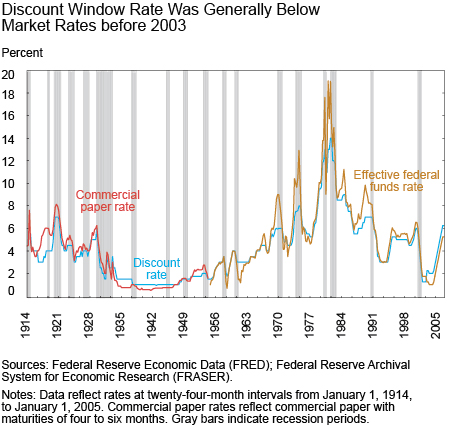 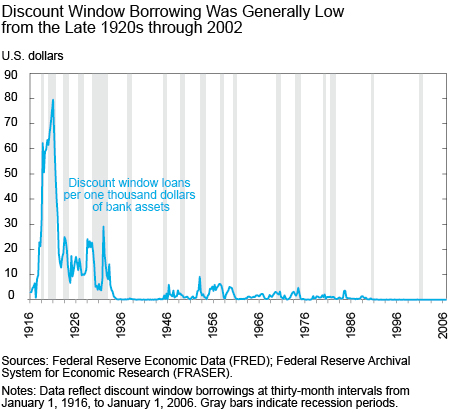 What Policies May Have Contributed to Discount Window Stigma?
Throughout the Fed’s history, several policies may have contributed to the stigma associated with DW borrowing. The Fed’s pressure on borrowers to limit DW borrowing likely created the perception among banks that DW use should be avoided. In particular, the requirements that a borrower had to satisfy the Fed that it had a legitimate reason to borrow from the DW and that it had exhausted private sources of funding likely contributed to DW stigma. Indeed, these requirements may have led market participants to presume that if a bank was borrowing from the DW, it must be in trouble, even if, in fact, the bank was borrowing to address a temporary funding shortfall or to meet reserve requirements.

The 2003 Discount Window Reform
To address concerns about DW stigma, the Fed fundamentally changed its DW policy in 2003, when it established the Primary Credit Facility (PCF). Only financially strong and well-capitalized banks are allowed to borrow at the PCF. The rate charged is a penalty rate above the target (range) for the fed funds rate (rather than a subsidized rate, as in the past), as seen in the DW rate chart. The PCF is a “no questions asked” facility—in other words, the Fed no longer asks banks whether they have exhausted all other sources of funding and it has no restrictions on the purpose of the loan. The Secondary Credit Facility was also created at this time, as a facility for weaker institutions that do not satisfy the criteria for Primary Credit—reinforcing the idea that borrowing from the PCF does not necessarily reflect a solvency problem.

Asani Sarkar is an assistant vice president in the Research and Statistics Group.
Posted by Blog Author at 07:00:00 AM in Fed Funds, Financial Institutions, Financial Markets

I would propose that it is time for a fundamental rethink of the Discount Window. When first conceived, the US had a much more bank-loan centric economy. Allowing loans against "good" commercial loan collateral was a way to avoid liquidity spirals at banks from impacting the broader economy.

The US now, though, has a much more market-focused economy. The risk that central bankers seem most obsessed with is asset-liquidation spirals. As corporate bonds are more widely dispersed, it would seem appropriate to address the asset-liquidation concerns more directly by lending directly to bond-holders rather than through the banks (as capacity constrained intermediaries).

I am of course talking my own book (working for an insurer), but if the Fed now has the ability to examine/supervise insurers and other non-bank institutions, it would see efficient to channel support directly to the end-holders of the debt.