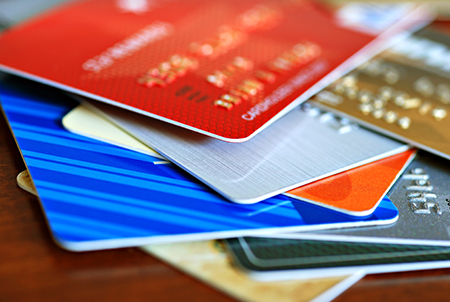 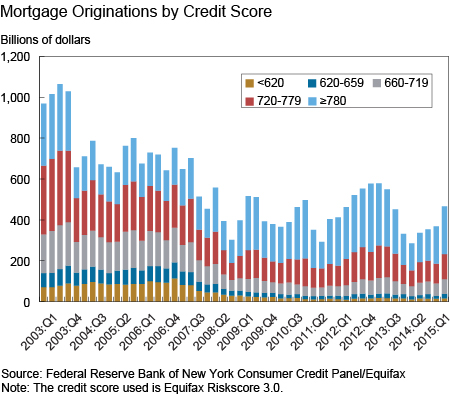 Overall, originations picked up in the second quarter of 2015 and have been rising over the last year. However, as the chart makes clear, this new mortgage borrowing has been driven by borrowers with credit scores above 660. Originations by borrowers with credit scores below 660, shown in dark blue and yellow, fell sharply after the Great Recession and have not recovered. Originations to borrowers with these low scores exceeded $650 billion in 2006, but have remained below $150 billion since 2010 as subprime mortgage lending has all but dried up.

The second chart we are adding shows the distribution of credit scores of newly originated first-lien mortgage loans. 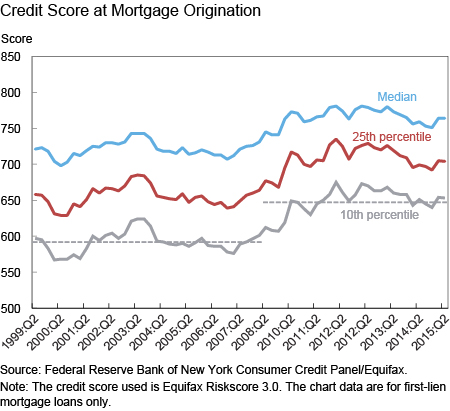 Underwriting standards for mortgages have loosened only slightly in the years since the Great Recession. The median credit score at origination hovered around 720 between 1999 and 2007 (with an average of 719); the median credit score of mortgage originators during and after the Great Recession has been 765. The 10th percentile line, in grey in the chart above, shows that the subprime borrowers have been all but precluded from originating. Between 1999 and 2007, 90 percent of borrowers who originated mortgages had credit scores above 590; between 2008 and 2015, 90 percent of borrowers had credit scores above 645, representing a 55-point upward shift of the distribution.

These charts will now be part of our Quarterly Report on Household Debt and Credit; the underlying data will be made available in our spreadsheet and the data from 1999 to 2003 will also be posted in our historical file. Stay tuned for additional changes to our report in coming quarters!

Posted by Blog Author at 11:15:00 AM in Household Finance, Housing