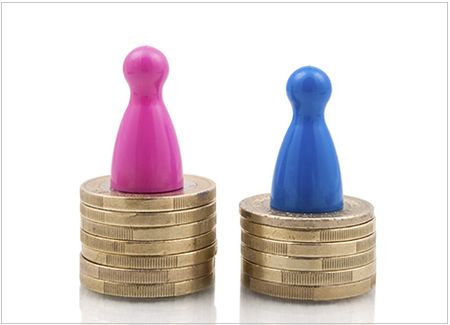 We often hear that women earn “77 cents on the dollar” compared with men. However, the gender pay gap among recent college graduates is actually much smaller than this figure suggests. We estimate that among recent college graduates, women earn roughly 97 cents on the dollar compared with men who have the same college major and perform the same jobs. Moreover, what may be surprising is that at the start of their careers, women actually out-earn men by a substantial margin for a number of college majors. However, our analysis shows that as workers approach mid-career, the wage premium that young women enjoy in these majors completely disappears, and males earn a more substantial premium in nearly every major. We discuss some of the possible reasons why the gender wage gap widens as workers progress through their careers.


The Gender Wage Gap among Recent College Graduates
Economists have long found a persistent wage gap between male and female workers. These gaps are estimated by comparing the earnings of men and women using any number of nationally representative data sets, and often control for observable differences among workers, such as age and education. We conduct a similar exercise using the American Community Survey, an annual survey of roughly one percent of the population, which reports data on education and earnings together with a number of demographic characteristics. Our computations use data for the years 2009 through 2013, allowing us to zero in on the gender wage gap in the early careers of college graduates following the Great Recession.

We start by focusing our attention on recent college graduates—those between the ages of 22 and 27 with at least a bachelor’s degree. Like other researchers who have investigated this issue, we use regression analysis to compare the full-time annual wages of men and women with equivalent amounts and types of human capital (for example, those with a bachelor’s degree, controlling for age and college major). Further, we compare men and women who are performing the same jobs (we account for nearly 500 different occupations across nineteen industries), and use a number of demographic controls (for example, race and broad geographic location). The results of our analysis indicate that among recent college graduates, men earn about 3 percent more than women overall. It is important to keep in mind that because the wage gap we estimate holds jobs constant, this premium is not owing to men and women performing different jobs, some of which tend to pay more than others, but rather represents an average of the differences that arise within each job we can account for.

Digging deeper, our analysis allows us to estimate the extent to which the gender wage gap varies across seventy-three undergraduate college majors. As the table below shows, this pay gap varies considerably by major, ranging from a 21 percent male wage premium for agriculture majors to a 16 percent female wage premium for social services majors. 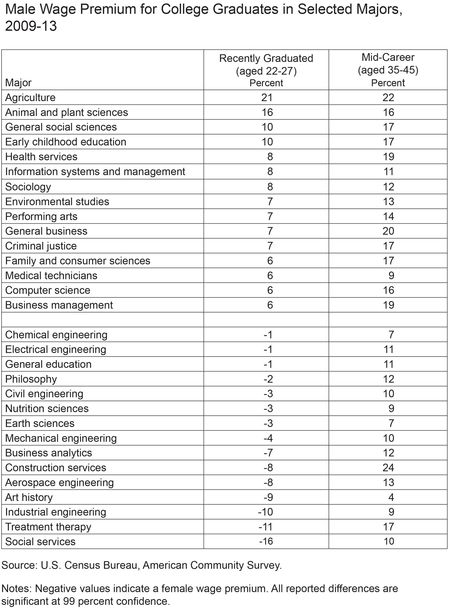 In fact, according to our estimates, newly minted female college graduates earn as much as, or more than, men in twenty-nine of the seventy-three majors. Young women earn particularly high wage premiums if they majored in engineering, treatment therapy, art history, construction services, or business analytics. At the other end of the spectrum, men tend to earn more than women by the widest margin if they majored in agriculture, animal and plant sciences, general social sciences, or early childhood education.


Wage Premiums Shift Widely in Favor of Men by Mid-Career
While the 3 percent wage gap among recent college graduates as a whole is fairly small, it widens significantly as workers approach mid-career. Following the same procedure as before, we estimate the gender pay gap for college graduates aged 35 to 45. For this mid-career group, we find that men earn about 15 percent more than women, much larger than the 3 percent figure we found for recent college graduates. When we estimate the gender pay gap by major for the mid-career group, the advantage completely disappears in the majors where we found younger women earned more than younger men, and the male wage premium widens substantially across nearly every major. Take social services majors, for example: the 16 percent female wage premium among recent grads turns into a 10 percent male wage premium at mid-career, a whopping change of more than 25 percentage points.

Our analysis uses a cross section of workers, and therefore relies on wage differences among people of different ages at the same point in time, as opposed to using data that follows individuals over time. However, other studies that use panel data on career trajectories find similar differences in the gender wage gap as workers get older.

There are a number of possible explanations as to why the gender pay gap is fairly small for recent college graduates, but grows for mid-career workers. First, to the extent that male earnings premiums represent discrimination against women, it is possible that such discrimination becomes more widespread as men and women approach mid-career. Another possibility is that pay differences arise for reasons related to raising a family. When we look at the outcomes of young college graduates, this group primarily contains single people without children, while the mid-career group includes a significant number of men and women with children. Women are more likely than men to spend time out of the labor force to bear and raise children. This interruption in a working career reduces the accumulation of work experience and human capital, which has been shown to have a negative influence on earnings. In addition, some jobs tend to reward long hours and fixed schedules—think surgeons or lawyers. Because raising a family often requires more flexible schedules, those with family responsibilities who have difficulty satisfying time sensitive work demands may face lower wages in these types of jobs. In fact, in jobs where such time demands are largely absent, and more flexibility is possible, the pay gap has been found to be much smaller.


Concluding Thoughts
Among recent college graduates as a whole, women earn about 97 cents on the dollar compared with men. That said, within this group, women tend to out-earn men in a number of college majors, sometimes by a substantial margin. We find these early career patterns fascinating, in part because they seem to present counter examples to the well-established male wage premium, but mostly because it is not entirely clear why we observe these patterns. To the extent that a wage premium for one gender represents discrimination, it may be that discrimination can occur in favor of either men or women, depending on college major, at least among recent college graduates. By mid-career, however, any wage premium earned by women completely disappears. As we grapple with the issue of gender pay equity, it is vital that we continue to examine these trends in more detail so that we can better understand their sources.

Richard Deitz is an assistant vice president in the Bank’s Research and Statistics Group.
Posted by Blog Author at 07:00:00 AM in Labor Economics, Wages

Thank you for your comments. We agree that it would be best to use longitudinal data to directly address how the wage gap changes as workers age. However, due to the difficulty of obtaining such data, which includes comprehensive information about workers’ college majors and their wages, we relied on pooled cross-sectional data from the American Community Survey. That being said, consistent with our findings, other studies which examine the wage gap using longitudinal data have found that the male wage premium widens as workers age (we note this in the post and provide two examples with links). Despite these limitations, we think we’ve uncovered some interesting patterns that warrant further investigation.

You have made a significant error by treating this as if it were a longitudinal tracking study of a single cohort. What you have done is compare 2 distinct demographic cohorts over the same period. Recent graduates do not "lose" wage advantage (or if they do it is not demonstrated this study).

A true comparison of the kind you describe would take the same age cohort and look at their starting salary based on census information when they entered the workforce in the mid-1990s as compared to the salary of the same cohort for the more recent data. That would tell us whether the gap grows or shrinks over time, and whether it is consistent with the behavior of similar gaps.

What this study would appear to actually show is that recent women graduates have achieved gains unique to recent graduates and that these gains are not distributed to women in the workforce generally. That is an extremely useful insight with significant policy implications. Your mischaracterization of your study as if it were a tracking study describing outcomes over time reaches the wrong conclusion and thus leads to wrong policy outcomes.

Please reconsider your description of the data, the nature of the study, and the outcomes.