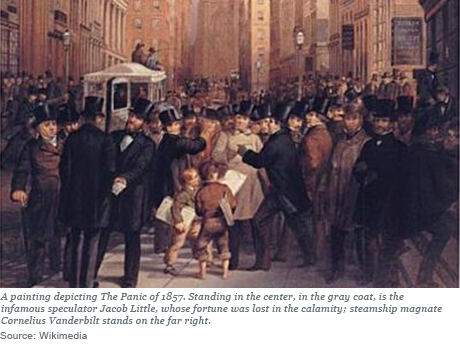 Paper Bubbles and Premonitory Symptoms
The outpouring of gold from California starting in 1849 fostered a period of prosperity in the 1850s. Spurred by migrations to the West, the decade saw a massive expansion of the railroads and the accompanying financial speculation by bankers and British investors. Robert C. Kennedy notes that “railroads were the backbone of the economic growth, with the construction of over 20,000 miles of track during the 1850s. They were aided by state land grants and financed by government bonds, stock sales on Wall Street, and foreign, particularly British, investments. . . . The number of banks almost doubled from 1850 to 1857. . . . Particularly important was New York City, the nation’s financial center and home to the Stock Exchange.”

Like a Cannon Shot
The start of the Panic of 1857 is attributed to the closing of a New York City bank owned by the Ohio Life Insurance and Trust Company on August 24th. The announcement of the bank failure


It did not help that bonds and stocks issued by railroads had been heading down over the course of the summer and that this decline had contributed to the bank’s failure. The question then was what other banks were vulnerable to dropping railroad securities prices.

Banks Go Defensive
Calomiris and Schweikart note that the suspensions in Philadelphia and New York led to defensive suspensions in the rest of the country that were encouraged by commercial interests. Firms gave up the right to pull out their gold in order to eliminate the need for banks to call in loans, which would “cause customers to go bankrupt or to sell off merchandise at ‘fire sale’ prices, which can result in bank losses as well. Suspension did not force banks to shut down; it allowed banks to choose which deposits and notes to redeem and permitted them to accumulate reserves gradually without calling in loans en masse.” Suspension forced the country’s banking system to work through paper-based transactions for two months and the fact that few banks failed suggests it was a good strategy.

Not Everyone Agreed
But the use of defensive suspensions to quell the panic wasn’t approved of by all. In December of that year, President James Buchanan focused on the Panic in his State of the Union. He argued for states to “require that the banks shall at all times keep on hand at least one dollar of gold and silver for every three dollars of their circulation and deposits, and if they will provide by a self-executing enactment, which nothing can arrest, that the moment they suspend they shall go into liquidation. I believe that such provisions, with a weekly publication by each bank of a statement of its condition, would go far to secure us against future suspensions of specie payments.” He then pushed this point by saying that the remedy might be done at the national level. “Congress, in my opinion, possesses the power to pass a uniform bankrupt law applicable to all banking institutions throughout the United States, and I strongly recommend its exercise. This would make it the irreversible organic law of each bank's existence that a suspension of specie payments shall produce its civil death. The instinct of self-preservation would then compel it to perform its duties in such a manner as to escape the penalty and preserve its life.”

Posted by Blog Author at 07:00:00 AM in Banks, Crisis Chronicles , Economic History, Panic

In a free market economy, when a company cannot meet contracted obligations, it is violating its contract and its customers should have recourse to legal remedy, such as through bankruptcy. Buchanon was aiming in the right direction, but better to have freedom and rule of law. (Some banks may set up rules with their customers that allow temporary suspension, if customers agree.)

America erred early on in its history in its government's giving banks special treatment. And we have suffered from doing this ever since.

In a true free market, banks necessarily police one another. Canada's great success exhibits many of the elements of this.

Any count of financial crisis thereafter can be taken as positive response to the 2nd question. No matter whether it is payment in specie or paper, banks' inflows of money are gradual, whilst in a crisis withdrawals happen all of a sudden. Any widespread attempt to restore liquidity by cutting credit entails a lasting process to cash in assets, which is unable to match the urgency to pay short term deposits, and hence is doomed to fail. So that the very concern monetary authorities have always had for bank runs ever since is the acknowledgement to this assertion.