First in a six-part series

Commentators have argued that market liquidity has deteriorated in recent years as regulatory changes have reduced banks’ ability and willingness to make markets. In the corporate debt market, dealer positions, which are considered essential to good liquidity, have indeed declined, even as issuance and outstanding debt have increased. But is there evidence of reduced market liquidity? In previous posts, we discussed these issues in the context of the U.S. Treasury securities market. In this post, we focus on the U.S. corporate bond market, reviewing both price- and quantity-based liquidity measures, including trading volume, trade size, bid-ask spreads, and price impact.

Dealers’ Intermediation Is Key in the Corporate Bond Market

Trading of corporate bonds in the secondary market is conducted over-the-counter, with most trading intermediated by dealers. By dealers, we refer to securities brokers and dealers, which are firms that trade securities on behalf of their customers as well as on their own account. When investors want to buy and sell bonds, dealers can match offsetting orders so that they avoid holding bonds on their balance sheets, or they can buy bonds from sellers and hold them on their balance sheets until offsetting trades are found later, thus bearing the risk that prices fall in the interim. The former is called the “agency model” while the latter is called the “principal model.” 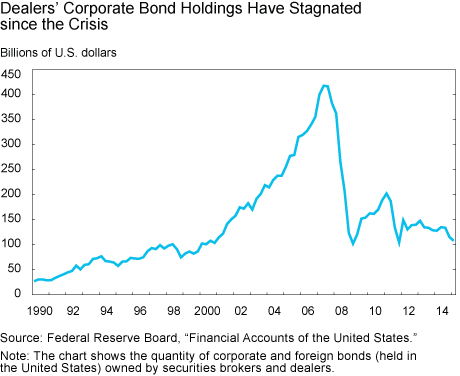 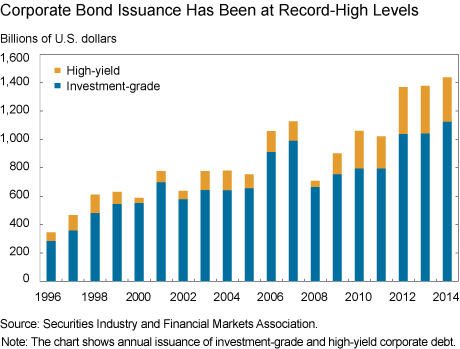 Trading Volume Has Risen Modestly, but at a Slower Pace Than Issuance

Trading volume has risen over time, especially since the financial crisis, but at a slower rate than debt outstanding. It follows that turnover rates—the ratio of trading volume to debt outstanding—for corporate bonds have declined, which is often pointed to as evidence of reduced liquidity. 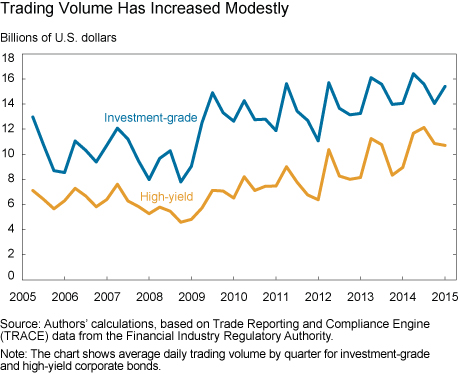 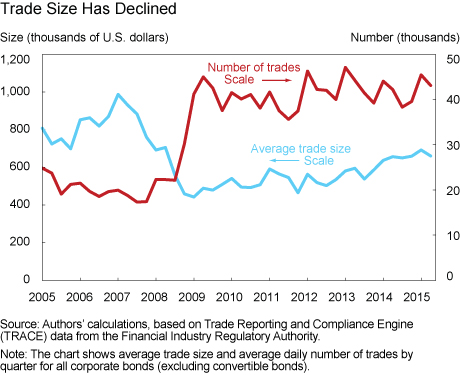 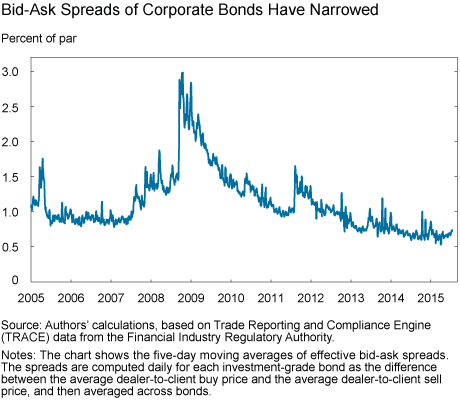 Another useful liquidity measure is the impact that a given trade has on market price. The chart below, based on the methodology in Amihud (2002), shows that price impact has been declining since the crisis and is now well below pre-crisis levels. 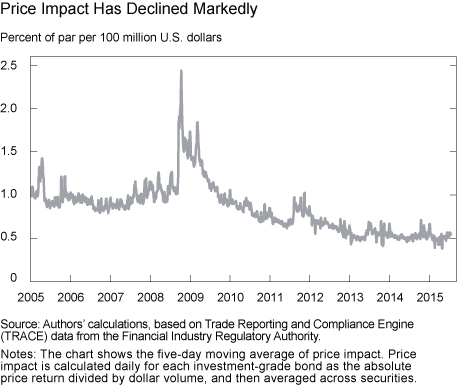 In conclusion, the price-based liquidity measures—bid-ask spreads and price impact—are very low by historical standards, indicating ample liquidity in corporate bond markets. This is a remarkable finding, given that dealer ownership of corporate bonds has declined markedly as dealers have shifted from a “principal” to an “agency” model of trading. These findings suggest a shift in market structure, in which liquidity provision is not exclusively provided by dealers but also by other market participants, including hedge funds and high-frequency-trading firms.

unfortunately this analysis misses the intangible – can you actually trade on the supposedly tight bid asks? Unequivocally the answer is no. Or at least – much less than you could have done pre crisis. There is an illusion of liquidity created by Trace and many dealers sending prices but the ability to transact in size at the price on screen at the time of the investors choosing has declined enormously.

The infatuation markets and regulators have with liquidity and transactional costs as a measure of orderliness is dangerous. Such fondness rests on a false premise that liquidity is inherently good. Reductions in transactional costs beyond a point do little more than encouraging trading velocity and leverage, a liquidity induced frenzy of non-productive, marginally economic, activity. This isn’t far from the soothing comfort rating based risk normalization provided not too long ago. Let the world become a tad more illiquid, let people bear a higher cost for their actions and you will end up with a more stable, less jump-prone world. Let’s do that, rather than celebrating market structures resting on shifting sands.