« Fundamental Disagreement: How Much and Why? | Main | Just Released: New Web Feature Provides Timely Data on the Job Market for Recent College Graduates » 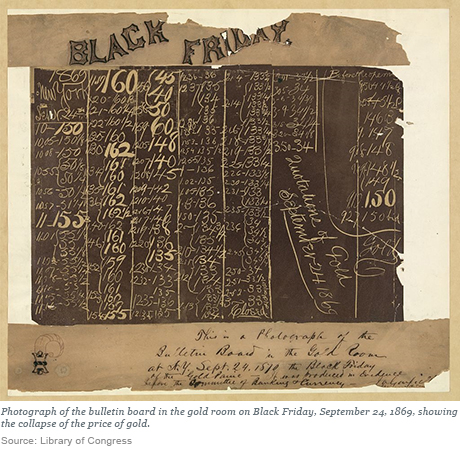 Wall Street in the late 1860s was a bare-knuckles affair plagued by robber barons, political patronage, and stock manipulation. In perhaps the most scandalous instance of manipulation ever, a cabal led by Jay Gould, a successful but ruthless railroad executive and speculator, and several highly placed political contacts, conspired to corner the gold market. Although ultimately foiled, they succeeded in bankrupting several venerable brokerage houses and crashing the stock market, causing America’s first Black Friday.

A Man, a Plan, a Railroad

Jay Gould was the president of the Erie Railroad. He and “Jubilee” Jim Fisk, his vice president and fellow robber baron, had a plan to corner the gold market and had the political connections to pull it off, or so it seemed. At the time, the Treasury was headed by Secretary George Boutwell and it sold gold every week in exchange for U.S. Treasury greenbacks—the unbacked (fiat) currency issued by the Union to fund the Civil War. Gould and Fisk schemed to convince President Ulysses S. Grant, who they knew socially via his brother-in-law, to halt those sales and give them room to corner the market.

Through a series of meetings with the president over the summer of ’69, Gould advanced his “crop movement” theory to justify driving gold higher:

That theory was, that the business interests of the country required an advance in the price of gold; that, in order to move the fall crops and secure the foreign market for our grain, it was necessary that gold should be put up to $145. (House Gold Panic Investigation)


Gould was essentially arguing that raising gold prices would devalue greenbacks and thus make U.S crops cheaper abroad and boost exports. That stimulus would in turn relieve what he perceived as a “general business dullness” prevailing at the time (“The Gold Crisis of 1869”). Left unsaid was that he and Fisk would benefit on two fronts: first from the rise in gold prices, and second from increased crop movements via the Erie Railroad, in which they were major shareholders.

Although President Grant was reportedly tight-lipped during these meetings and refused to reveal his thoughts on the crop movement proposal, he eventually wrote to Secretary Boutwell expressing doubts about continued gold sales and Boutwell responded by pausing them.

Extraordinary Fluctuations in Gold
When Gould and Fisk learned that gold sales had been halted (from an Assistant Treasurer they had bribed for inside information), the two men accelerated their purchases. As gold prices rose quickly over a matter of days, President Grant began to suspect their motives. Grant also worried that his brother-in-law, Abel Corbin, was involved. The President had the First Lady, Julia Grant, write Corbin’s wife, his sister Jennie, informing her that the president was “very much annoyed by your speculations. You must close them as quick as you can.”(“The Gold Crisis of 1869”).

On the evening of Thursday, September 23, President Grant met with Secretary Boutwell to discuss the precipitous rise in gold prices and granted him permission to break the suspected corner by selling $4 million in gold. That was a considerable amount relative to the overall market of about $15 million.

Foiled!
September 24 started in a frenzy as “bears and bulls jammed the floor … an hour before the opening.” (The Gold Ring) Gold opened at $145 but quickly spiked to $160. Fisk planned to continue “bulling” gold, but when Gould caught wind of the pending Treasury sale he reversed course and began quietly selling without telling Fisk. When news of the Treasury sale finally reached the other traders, “prices galloped like mad; from $160 … to $133.”( The Gold Ring)

The aftermath was chaotic and the gold room closed for several days as clerks tried to match sales from heavy trading throughout the week. The stock market fell 20 percent as speculators who had shorted gold had to fire-sell other securities to cover their shorts. Several venerable brokerage houses went bankrupt.

To protect himself, Gould paid off William “Boss” Tweed and some New York judges to delay the settlement of unfavorable trades, and ultimately escaped with his wealth intact. Fisk, who had been buying gold contracts on behalf of other investors, simply reneged on his obligations and also came out unscathed. Neither ever spent a day in jail. Three years later, Fisk was murdered in mid-town Manhattan by a romantic rival who was trying to extort him.

Was Gould's Rationale Plausible?
If you look past all his scheming and conniving, Jay Gould may have actually had a point. U.S. monetary policy in the late 1860s was de jure contractionary; the Contraction Act of 1866 required the Treasury to retire greenbacks with gold with the goal of eventually returning to the gold standard at the pre-Civil war parity. Those nineteenth century “open market operations” contracted the money supply by 20 percent between 1865 and 1867, which triggered a severe deflation that fell especially hard on heavily indebted farmers (by increasing the real value of their debt burden) ("Three Great American Disinflations").

Against that monetary and macroeconomic background, Gould’s proposal made some sense. His perception of a “general business dullness” was on target. According to official recession designations, the economy slipped into recession in June of 1869. Gould was essentially urging Grant to adopt a more expansionary or at least neutral monetary policy (by halting greenback purchases), which would lead to currency devaluation and stimulate exports. Easier money and devaluation are standard prescriptions for a contracting, deflationary economy. While Gould’s motives and machinations were suspect, to put it mildly, his diagnosis of an ailing economy and his policy prescription were reasonable. But that’s our, possibly unorthodox, opinion. Tell us what you think.

Thank you for posting this. Reading your first sentence on Black Wednesday (Dow down 500+ at this writing), I wonder what has changed in Wall Street in the years since 1869. -- Walker Todd, Chagrin Falls, OH

Thanks for your comment. We merely assumed that Greenbacks were circulating as a medium of exchange, which they did, i.e. that they were part of the money supply if not “the” money supply. You are correct that Greenbacks could not be used to pay duties, they were legal tender for debts both private and public which promoted their circulation. Our claim that the gold sales under the Contraction Act reduced the money supply is from Bordo et al. (“The End of Four Great Disinflations p.5):

Accordingly, Congress passed the Contraction Act in April 1866, with the backing of President Johnson. This act instructed the U.S. Treasury – the effective monetary authority during that period - to retire the supply of greenbacks. Given initial public support for a quick return to convertibility, the Treasury proceeded aggressively, reducing the monetary base about 20 percent between 1865 and 1867. However, the sharp price deflation that ensued had a contractionary impact on the economy, with certain sectors experiencing disproportionate effects (e.g., heavily leveraged farmers).

We used “supply” instead of “base” to keep it simple.

The essay makes a common mistake. It assumes that Greenbacks were part of a single "money supply". Specie - gold - was the only legal tender that had the universal negotiability we commonly define as a characteristic of "money". Greenbacks were, at best, a "near-money"; they could not be used, for example, to pay U.S.customs duties - the principal source of income for the U.S. government. By regularly selling the gold that the Treasury collected in customs receipts Boutwell was adding to the "money supply", not contracting it. The Contraction Act had been enacted because then, as now, the citizens of the country were concerned about the further expansion of Federal debt, which had already exploded during the Civil War. The Greenbacks, which did not even pay interest, were seen as the worst part of that spending spree. Their retirement cannot in any sense be described as “open market operations”; in that world, unlike this one, the government's own debts were not considered to be money.