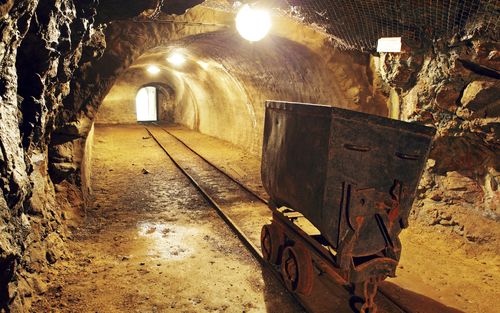 Prices Are Correlated with Global Growth
Commodity prices tend to fall when the global economy falters and rise when it is booming. The chart below compares global growth, as measured by the International Monetary Fund, with the annual percentage change in the Commodity Research Bureau price index for raw industrial goods (various metals, cotton, rubber, wool, and other goods). The two lines move together, with a regression using global growth having an R-squared of .52. That is, global growth explains around 50 percent of change in this commodity price index over this period. Looking at the chart, the closest co-movements are from 2004 to 2007—when the world economy was growing at an annual pace of more than 5 percent and the commodity price index was rising 15 percent per year—the collapse in growth in 2008-09, and the rebound in 2010-11. However, this relationship struggles to explain the 1995-96 and 2012-15 periods, with the latter being one of stable global growth and steep commodity price declines in both 2012 and 2015. 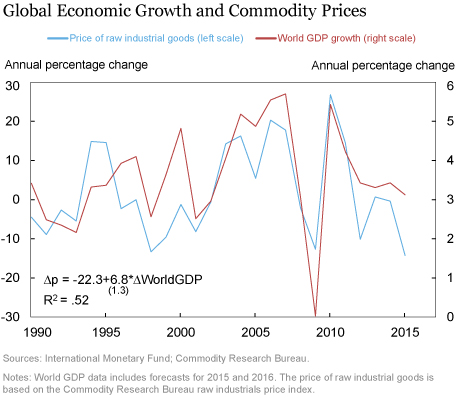 Prices Are Also Correlated with the Dollar
Analysts looking for another explanation of last year’s price decline point to the strong correlation of commodity prices with the dollar—commodity prices tend to fall (rise) when the dollar appreciates (depreciates). One theory is that prices fall when the dollar strengthens because commodities priced in dollars become more expensive to the rest of the world, thereby restraining demand. It is a plausible explanation, but it is also quite possible that the dollar is not a causal factor and is instead correlated with other underlying factors affecting commodity prices. 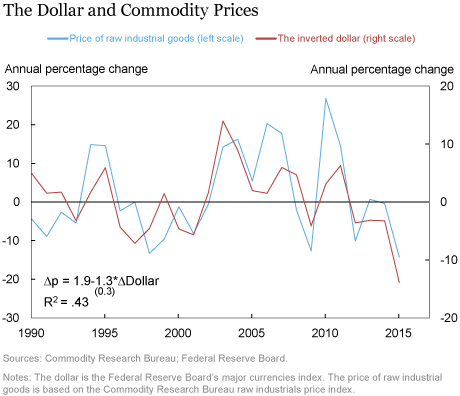 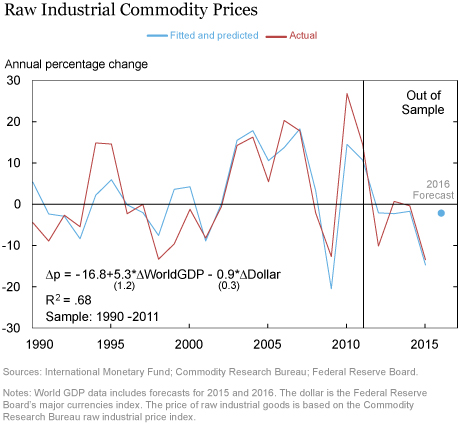 Considering an Alternative Commodity Price Index
In case you are wondering if the results are driven by our choice of price index, we repeat this last exercise in the chart below using an alternative measure of commodity prices—namely U.S. import prices of industrial supplies, which includes a much broader array of commodity-type goods, such as steel and lumber. The results are similar, with global growth and the dollar capturing most of the movement in this price index. Again, based on the growth and dollar assumptions, the regression predicts the index will be stable in 2016. 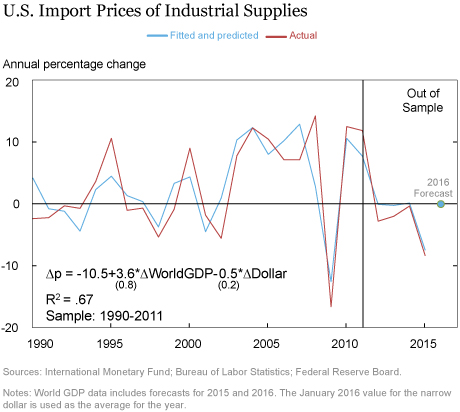 Harry Wheeler is a senior research analyst in the Bank’s Research and Statistics Group.
Posted by Blog Author at 07:00:00 AM in Forecasting, International Economics, Macroecon

"However, this relationship struggles to explain the 1995-96 and 2012-15 periods, with the latter being one of stable global growth and steep commodity price declines in both 2012 and 2015."

You might want to take a look at another variable which is Corrected Money Supply for the US. A graph can be seen at http://www.philipji.com/item/2016-03-05/a-major-crash-is-on-the-cards-this-year. For your convenience I have uploaded a graph for the period from 1990 to 2016 which is at http://www.philipji.com/CMS-1990-2016-libertystreeteconomics.png

I also venture to predict that because Corrected Money Supply Growth is approaching the 0% level, commodity prices will either continue to be low or there will be a major crash.