Hey, Economist! What Did You Make of “The Big Short”? -Liberty Street Economics

Hey, Economist! What Did You Make of “The Big Short”? 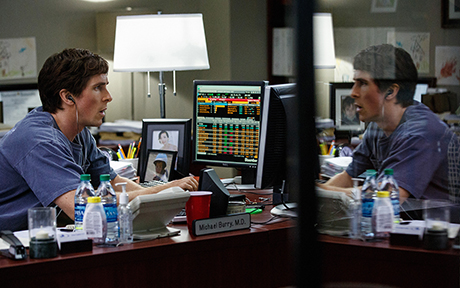 The Big Short has been making a big splash this year, racking up five Academy Award nominations and taking home the Oscar for best adapted screenplay. The movie provides a very entertaining way to gain an understanding about some of the underpinnings of the financial crisis, particularly through a few memorable cutaway scenes—such as when actress Margot Robbie explains mortgage-backed securities (MBS) from a bubble bath, chef Anthony Bourdain compares collateralized debt obligations (CDOs) to seafood stew, and singer Selena Gomez explains synthetic CDOs using the analogy of “side bets” made by people watching a casino blackjack game.

But how accurate is the film in portraying what actually happened? And what does academic research have to say about some of the issues highlighted in the movie? To get a better handle on these questions, research officer Jason Bram caught up with Andreas Fuster, a New York Fed economist who has conducted extensive research on housing, the mortgage market, and securitization.

Q: So the shorters were the heroes and almost everyone else was either dumb or outright fraudulent, right?
A: Well, some make the argument that these shorting activities enabled the market for (synthetic) CDOs to become substantially larger than it otherwise would have—especially at the tail end of the boom. Synthetic CDOs were a way to satisfy the large worldwide demand for AAA-rated structured finance products based on mortgage risk. This demand far outstripped the amount of originated loans. So the synthetic CDOs were essentially side bets on the performance of these mortgages—but to make their creation possible, somebody had to take the “short side.”

Synthetic CDOs ultimately exacerbated the bust and made it particularly painful—by creating total financial exposures that were a multiple of the amount of the underlying loans that defaulted.

Q: Okay, but in any event these shorters were among the few who saw this coming, so they deserve a lot of credit and money for that?
A: Lots of people had been arguing that there was a bubble in house prices—for example, Nobel prize-winning economist Robert Shiller or The Economist magazine—although others invoked a variety of factors that could justify the high house prices. The issue with spotting a bubble is that you will only benefit from your knowledge if you get the timing exactly right—as the movie illustrates quite well. If the protagonists had placed their bets a year earlier—when lending practices were just as lax—they would likely have lost all their money to subprime bulls.

Shorting the market in the way they did is very risky, and one has to be very confident, perhaps overconfident, in one’s forecast to take such risks. As a consequence, many people who were pessimistic about the housing market simply stayed on the sidelines—which in turn meant that for a while, valuations in the market primarily reflected the beliefs of optimists.

Q: But still, nobody knew so many borrowers would default?
A: In fact, evidence from analyst reports written before the financial crisis suggests that people had a pretty good idea that if housing prices dropped on a large scale, things would go south pretty badly. Investors nevertheless kept piling into these securities because they thought it inconceivable that housing prices could decline significantly on a national level. Academic research has found that many actors involved in the securitization chain deepened their own exposures to the housing market by buying during 2004-06. This suggests that they did not foresee that housing markets would crash, casting doubt on a view that they were knowingly pumping out bad securities that they suspected would default at high rates. Rather, since everybody was profiting from continued growth in house prices and lending, there was likely not enough reflection about the long-term sustainability of the boom. Or, as Upton Sinclair elegantly put it, “It is difficult to get a man to understand something, when his salary depends on his not understanding it.”

Q: Early in the film, Michael Burry (played by Christian Bale) scrolls through a spreadsheet detailing individual mortgages. How realistic is it that he could actually have seen that data in advance of the crisis unfolding? Weren’t these securities extremely opaque?
A: There was a lot of very detailed information available at the level of the individual loans underlying a security. For an example, see the very informative story of a security page on the website of the Financial Crisis Inquiry Commission. These securities were not particularly opaque to anybody willing to look. Of course, it is likely that many investors (especially relatively less sophisticated ones) did not go through the trouble of digging into the details, instead simply relying on the securities’ AAA rating.

Q: One of the most interesting moments of the film is when Steve Carell's character visits one of the homes with a delinquent mortgage. A personable man answers the door and says that he is not the homeowner but rather a renter. He then informs Baum that the name underlying the mortgage is the name of the landlord’s dog. How common were such shenanigans?
A: This question has been examined in several research papers in recent years. For instance, some New York Fed colleagues have found an important role for “undeclared” investors—borrowers who pretended to live in the property when applying for the loan but subsequently rented out the property or just hoped to flip it quickly. These accounted for a substantial share of new mortgage originations, especially in “bubbly” areas, and subsequent defaults. Other research has focused on the misreporting of income or assets.

An interesting recent study focuses on who in particular facilitated misreporting: borrowers, appraisers, originators, or MBS underwriters? The authors find an important role for originators in underreporting second liens, for borrowers in misreporting their intended occupancy, and for appraisers in “hitting the number” the loan officer wanted. An intriguing finding is that by and large, the incidence of misreporting did not substantially change over the course of the boom, as one might have expected (see their Fig. 1 and this blog post for details).

Q: How could anybody think that giving loans to people without asking them to fully document their income and assets, or to people with extremely low credit scores, was a good idea?
A: Low-documentation loans were not a new invention. Before the boom, such loans were given to self-employed borrowers, for whom detailed income documentation could be very burdensome, or to wealthy borrowers who did not want to document their capital income. And perhaps not surprisingly, such borrowers do not default at particularly high rates. The problem was that this relatively weak statistical relationship between documentation and default was interpreted to imply that income and asset verification was not very important. This reliance on models based on data from a different environment is what opened the door for the proverbial “liar loans.”

As for credit scores, it is true that low-score borrowers defaulted at higher rates both before and during the crisis. But during the boom, their default rates were low enough to be compensated for by the higher interest rate charged to such borrowers; and during the bust the relative increase in foreclosures was actually larger for “prime” than for subprime borrowers.

Q: How could ratings agencies give AAA ratings to these highly risky securities? And why did anybody pay attention to them?
A: Much has been written about problems with the credit ratings process leading up to the crisis. What is often ignored is that the losses on AAA tranches primarily occurred for CDOs ; many of the “simple” AAA subprime MBS tranches did not end up suffering losses. In rating a CDO, ratings agencies had to make assumptions not just about the probability and cost of default of the underlying mortgages, but also about the correlations of these parameters across different pools of loans. The projected payments to investors can be very sensitive to these assumptions and, even if there had been no incentive problems for the ratings agencies, coming up with the right rating for these securities is extremely challenging.

People paid attention to the ratings in part because many investors, such as pension funds, are required to invest in only the highest-rated securities. And it is likely that at least some investors were not sufficiently aware of the issues surrounding the ratings.

Q: The prices of the securities continued to rise, even as mortgage defaults started to balloon and make headlines. How can that be explained? Was mischief involved?
A: It is difficult to know whether the failure of MBS and CDO prices to drop as defaults started to increase and house prices began to drop was indeed due to manipulation—which could take the form of reliance on a pricing model with underlying assumptions that had clearly been proven wrong—remaining optimists in the market, or something else. Research has found that the prices of CDS (credit default swaps) on AAA subprime MBS were, surprisingly, almost uncorrelated with changes in the expected credit performance of the underlying mortgages. Instead, these prices seem affected by the strength of demand for insurance and the risk-bearing capacity of the insurance providers.

Q: So, not to oversimplify, but in effect, the subprime and subsequent financial crisis were largely caused by the widely held presumption that home prices would keep going up or at least couldn’t go down at the national level?
A: There is still debate about this among researchers, but it does seem like this bubble mentality was a key root cause of the crisis. But of course, many other factors may have contributed to the bubble forming and then sustaining itself for so long: low interest rates (due to monetary policy and the global demand for safe assets), U.S. housing policy, lender regulation, financial innovation, the ratings agencies, and others.

Andreas Fuster is a research officer in the Bank’s Research and Statistics Group.
Posted by Blog Author at 07:00:00 AM in Financial Markets, Hey, Economist!, Housing