« The Turnaround in Private and Public Financial Outflows from China | Main | Crisis Chronicles: Gold, Deflation, and the Panic of 1893 »

Household Consumption Mobility over the Life-Cycle

Editors’ note: The y-axis labels on the charts in this post have been corrected to read “Share,” rather than “Percent.” 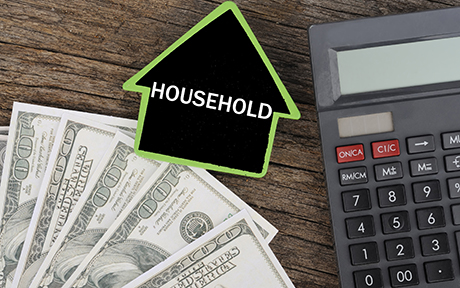 Commonly used metrics of inequality and mobility attempt to capture how household (or individual) income compares to the rest of the population and how persistent that income is over the life cycle. It can be helpful to think of the income distribution as a ladder—each household is a rung, ranked by its level of income. If household income rankings remain constant over time, this could indicate a low level of mobility in a society. However, income only constitutes one aspect of overall well-being. Another crucial, and potentially more appropriate, dimension is consumption expenditures—how much do people spend on goods and services? In many ways, consumption can be thought of as a proxy for quality of life, since what a household buys says a lot about its access to the necessities of life. Therefore, the analysis of consumption expenditures mobility constitutes a crucial dimension of mobility.

So if we rank households in a ladder based on their consumption levels, how persistent are these rankings over the life-cycle? Is persistence different across high and low levels of consumption? Further, does consumption mobility vary between different demographic groups? These are the questions we address in this post as well as in a broader research agenda. We investigate how likely households are to remain at the top or the bottom of the consumption spending distribution. We look at overall mobility and, as an example of differences across demographic groups, mobility broken down by race.

The PSID
For our analysis, we use the Panel Study of Income Dynamics (PSID) to construct three decades of household level life-cycle consumption profiles, beginning in 1981. While we pick 1981 as our base year for convenience in terms of sample size, our findings are robust to the choice of the base year.

The PSID is a longitudinal survey conducted by the University of Michigan, which has continuously surveyed households since 1968. Members of households from the 1968 survey became PSID “sample members” and were surveyed annually until 1997, after which they were surveyed biannually. Furthermore all lineal descendants of original sample members became sample members themselves and were independently followed and surveyed once they started their own households.

Historically the PSID asked respondents to report the monetary value of their household’s consumption of food at home, food away from home, and food stamps—with the exceptions of 1973, 1988 and 1989. Then beginning in 1999, households have been asked to detail their spending on a wide array of goods and services, such as utilities, transportation costs, and healthcare. Unfortunately, spending on clothing, vacations, entertainment, and other similar discretionary spending only became available in 2005.

Measuring Household Consumption Expenditures
Only a limited amount of consumption spending information is available prior to 1999, so we use a consumption imputation method developed by Blundell, Pistaferri, and Preston. This enables us to predict a household’s consumption in each sample year, based off a series of covariates that are available in every year of the survey. Specifically, the method uses spending on food, socio-demographic information (state, age, number of children, highest level of education, marital status, disability, etc.), and price controls to predict nonfood consumption. Our final measure of consumption expenditures includes food, rent equivalents, home insurance, electricity, heat, water/sewage, miscellaneous utilities, car insurance, gas, parking, bus/train, cabs, other transport, school fees, other school costs, childcare, health insurance, hospital care, doctors, and drugs. We then adjust the predicted household consumption each year by the Consumer Price Index and the OECD equivalence scale to arrive at annual measures of real consumption that take into account both the number and ages of all household members.

Consumption Mobility
For each survey year, we order all households by consumption levels and divide them into quintiles—brackets each containing 20 percent of the households, based on their ranking in the consumption ladder. Our analysis then mimics the method of transition matrices, in a standard regression framework, to assess life-cycle consumption mobility. In this analysis we focus on two initial quintiles—the bottom and the top. In other words, we will describe the probability that a household first observed in the bottom quintile stays in the bottom quintile, and the probability that a household that begins at the top, stays at the top. Although the analysis of average mobility—the persistence in any given quintile—is interesting as well, it could mask important heterogeneity for the two natural focal quintiles: bottom and top.

We set 1981 as a base year, using households present in the PSID at that time whose heads identify as black or white as our fixed sample. We then analyze the transition probabilities for each household for every survey year up to 2011. Therefore, we are able to capture a substantial part of the life-cycle, as our typical head of household is 40 years old in 1981.

The Aggregate Picture
In the chart below, we draw the probability of a household remaining in the bottom or top quintile (left and right panel respectively), of the national consumption distribution for each year, given that a household is observed in that particular quintile in 1981. 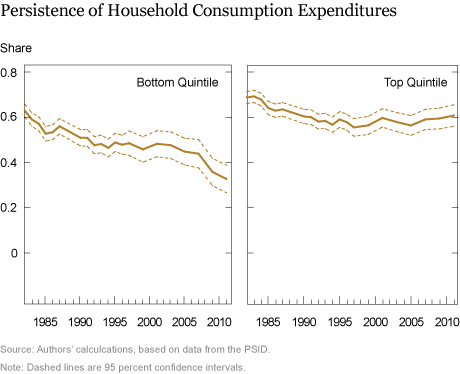 Persistence in the Bottom Quintile
The probability of the average PSID household being observed in the bottom quintile, after having been observed there in 1981, drops continuously over the life-cycle. While there is an initial drop to about 63 percent between 1981 and 1982, that probability declines steadily to about 33 percent by 2011. This tells us that of the surviving households observed for thirty years, slightly more than a third of those originally observed in the bottom quintile in 1981 remain in that quintile in 2011. On the other hand, this also suggests quite a bit of upward mobility. The other two-thirds of the 1981 bottom quintile move up in the national ranking by 2011 (with about 27 percent, 16 percent, 15 percent, and 9 percent in the second, third, fourth, and fifth 2011 quintiles, respectively).

Black and White Mobility
Our next step is to perform the same analysis separately for households with a head of household who identifies as black or white, while preserving their consumption ranking relative to the pooled ranking. This way, we can see how the probability of staying in the bottom or top quintile varies for different racial groups. Again, since we only use data on heads of households and consumption is reported for family units, our analysis is effectively at the household level. We denote the estimates with a blue and red solid line for black heads of household and white heads of household respectively. The dashed lines represent 95 percent confidence intervals around the estimated parameters. 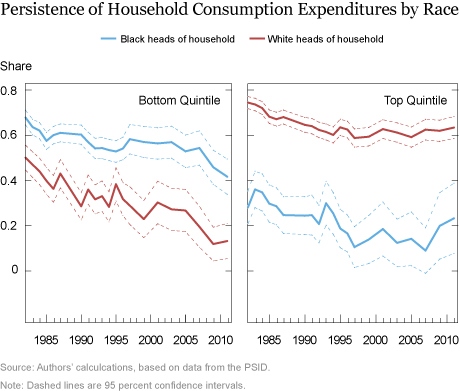 Accounting for Observables
The analysis so far, however, doesn’t account for differences in observable characteristics between black and white heads of households. This is exactly the analysis we present in the chart below. We again estimate the transition probabilities, this time adding controls for age, age squared, gender, and the highest level of education of the head of household, fully interacted with race. We note that given the conditional analysis here, the probability levels drawn are not expected to match the levels of the unconditional profiles in the previous charts. 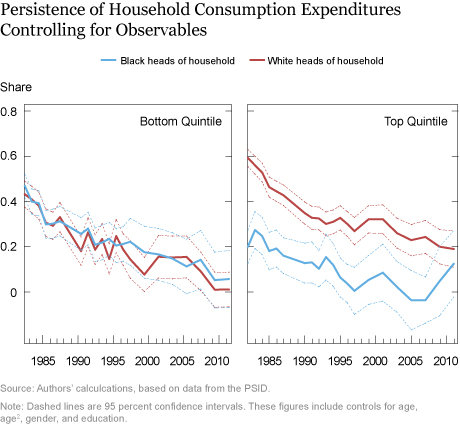 Persistence in the Bottom Quintile Controlling for Observables
The differential probabilities of a household remaining in the bottom quintile appear to be fully eliminated by our sets of controls. In particular, we note that black households at the bottom of the consumption distribution in our sample are larger in size, more likely to be headed by a single female head of household, and have lower levels of education.

Persistence in the Top Quintile Controlling for Observables
While we have shown that the probabilities of remaining in the bottom quintile are essentially the same for black and white heads of households, once basic socio-demographic characteristics are accounted for, the same is not true for the top quintile. In fact, as we can clearly see from the right panel of the above chart, those differentials are still present, albeit diminished, when we control for observable characteristics. Although the differential in probabilities tends to fade out over the life-cycle they are quite large for the first two decades, with white households almost twice as likely to remain in the top quintile. This suggests that whites’ persistence in the top consumption quintile is much higher than blacks’ persistence, even when comparing observationally equivalent households in terms of the age, education, and gender of the head of household. It is important to note that there could be a number of other characteristics that differ between the two groups. In particular, we observe that black heads of household at the top end of the consumption distribution appear to have lower, and importantly more volatile (over the life-cycle), incomes than white heads of household.

Summary
We conclude that black and white PSID heads of household appear to have different life-cycle consumption mobility profiles on average, with black households generally having a higher persistence at the bottom of the distribution and a lower persistence at the top. The immobility at the bottom seems to be fully explained by a small set of important characteristics. At the same time, those characteristics fail to account for the larger downfall risk experienced by black heads of household at the top end of the distribution.

Upon further investigation, we note that black heads of household in the PSID are clustered in lower paying occupations, even within an industry. Importantly, black heads of household are substantially more likely to appear in occupations that feature high wage dispersion, which could indicate a higher volatility in income and therefore higher risk of downfall. It is also possible that the permanent and transitory component of the shocks to earnings could be rather different between black and white households, with blacks having a much less permanent income profile at the top of the distribution. These latter facts call for further research and certainly a deeper investigation of the income generating process.

Nicole Dussault is a senior research analyst in the Bank's Research and Statistics Group.


How to cite this blog post:
Giacomo De Giorgi and Nicole Dussault, “Household Consumption Mobility over the Life-Cycle,”
Federal Reserve Bank of New York Liberty Street Economics (blog), May 11, 2016,
http://libertystreeteconomics.newyorkfed.org/2016/05/household-consumption-mobility-over-the-life-cycle.html.
Posted by Blog Author at 07:00:00 AM in Household Finance

Hello,
Thanks for the analysis. Am I correct in thinking that the following two households would be equal in terms of consumption?

That does not seem imply the same quality of life to me, especially given the fact that the types of goods and services you are tracking are necessities and not discretionary items. I think I would feel better about the above scenarios being treated equally for the purpose of complimentary research to traditional income mobility studies, if you were able to focus on discretionary spending.