What’s Up with GCF Repo®? 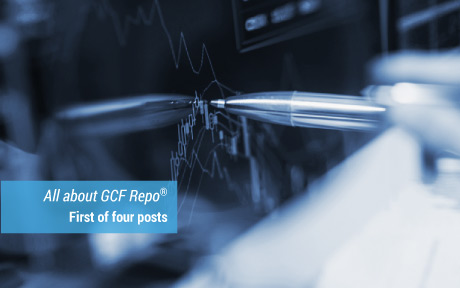 In a recent Important Notice, the Fixed Income Clearing Corporation (FICC) announced that it would no longer support interbank trading for its General Collateral Finance Repo Service. (GCF Repo®, hereafter GCF Repo, is a registered service mark of FICC.) But what exactly is the GCF Repo market? And what is interbank GCF Repo specifically? In a series of four posts we take a close look at the GCF Repo market and how it has evolved recently. This first post provides an overview of the GCF Repo market and evaluates its size relative to that of the tri-party repo market as a whole. We also explain what interbank GCF Repo is and show what share of the market it represents.


Intrabank and Interbank GCF Repo
FICC’s GCF Repo service allows its members to trade repo contracts anonymously through interdealer brokers, with FICC serving as the central counterparty. As described in this Primer, GCF Repo is one way for dealers to obtain collateral and secure funding. Dealers submit GCF Repo trades anonymously, through interdealer brokers, and FICC guarantees, nets, and novates GCF Repo trades. (Through novation, FICC becomes the buyer to every seller and the seller to every buyer.)


How Big Is the GCF Repo Market?
Since GCF Repo settles on the clearing banks’ tri-party platforms, it is often viewed as part of the overall tri-party repo market. The chart below shows that both the tri-party and GCF Repo markets, as measured by settlement volume, have decreased in recent years. In a previous post, our colleagues studied whether recent regulatory changes may have contributed to this decline by prompting dealers to revise their repo strategies. 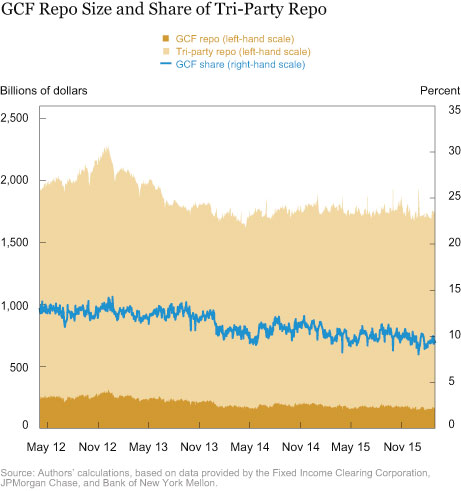 There are several ways to measure GCF Repo market size. One method is to look at the sum of the value of all trades in the market; this provides a gross measure of activity. Another method is to calculate settlement value in the GCF Repo market—a measure that is distinct from the sum of total repos because FICC nets offsetting repos and reverse repos within a collateral class when GCF Repo trades settle. (While the two measures differ in GCF Repo, they are the same in the tri-party repo market exclusive of GCF Repo because dealers cannot net their offsetting positions.) We can calculate the settlement value as the sum of all the dealers’ positive net positions within each collateral class—that is, the total value of the collateral in the market. Since 2012, settlement in the GCF Repo market has shrunk from more than $250 billion to approximately $175 billion on an absolute basis, and has decreased somewhat as a proportion of the overall tri-party repo market.

How Big Is the GCF Interbank Segment?
The GCF Repo market can be further broken out into interbank and intrabank components by summing the net settlement positions of all the dealers for each clearing bank. Because some trades can net during settlement, this measure of interbank activity can miss some trades that actually occurred between dealers. What it captures is the total amount of collateral in the market that relies on interbank GCF Repo to settle. We think this is a useful measure. To understand why, suppose a dealer looking to lend against Treasury securities can choose between two similar trades, one from a dealer at the same clearing bank and another from a dealer at the other clearing bank, between which it would be broadly indifferent. Because the trades in GCF Repo are blind-brokered, the trade the dealer will ultimately choose could be either random or determined by the actions of the interbroker dealer. The dealer would thus have a roughly 50 percent chance of doing an interbank repo, even though a similar trade could have occurred on an intrabank basis. By considering interbank settlement, we capture the value of the collateral that could not be settled on an intrabank basis.

The next chart shows that the share of interbank GCF Repo decreased from more than 20 percent in parts of 2012 to between 10 and 15 percent today. In 2015, interbank GCF Repo represented an average of 1 percent of the overall tri-party market. 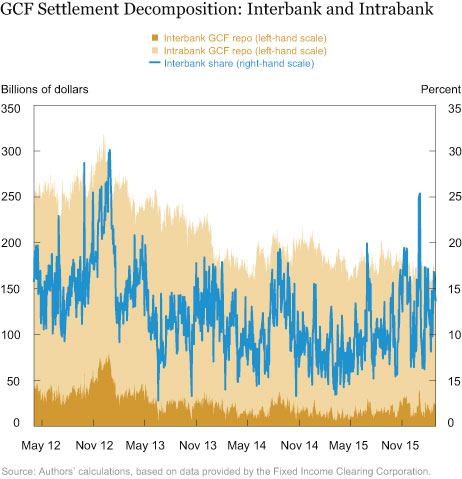 Not the First Time
FICC suspended interbank activity once before, between 2003 and 2008, so its upcoming suspension is not unprecedented. The objective of that suspension was also related to the extension of intraday credit, but the issue was somewhat different, as we explain below.

The Government Securities Clearing Corporation, FICC’s predecessor, developed the GCF Repo product with the two clearing banks in 1998, and service began on an intrabank basis only. Interbank trading began in 1999 and increased rapidly following its launch. At the time, settlement of the tri-party repo market, including GCF Repo, involved a morning “unwind” (see the Economic Policy Review article “Key Mechanics of the U.S. Tri-Party Repo Market”), in which collateral was returned to the borrowers and cash was returned to the lenders. With interbank GCF Repo, this unwind entailed large extensions of intraday credit between clearing banks. To eliminate that risk, FICC suspended interbank GCF Repo on March 11, 2003, and did not reinstate it until several years later in 2008 after it had developed a solution to the problem with the clearing banks.


Déjà Vu All Over?
It may be tempting to look to the 2003-08 suspension of interbank GCF Repo as an indicator of what might happen when interbank GCF Repo is suspended again later this year, but the repo market has changed so much since 2008 that lessons from that period may not provide much insight. The changes include the tri-party repo infrastructure reform (which has led to the practical elimination of the morning unwind) and a shift in the market share of the two clearing banks, as well as the regulatory changes coming from Basel III.

In the next three posts, we provide some useful ways of looking at the GCF Repo market and its recent evolution. Tomorrow’s post describes the amount of activity by each clearing bank and the various collateral classes traded in this market.

Thank you, Peter, for your comment. You make some valid points. While we believe that the repo market is a lot more robust than it was prior to the crisis, we think that further improvements are needed. In particular, the market is still vulnerable to the failure of a large dealer, which could lead to fire sales and be disruptive to the financial system. A CCP could contribute to mitigating that risk and perhaps support liquidity in the market.

The timing of these articles is very important for the repo market. Earlier this year, DTC asked the SEC for a rule change on "legal" language in its rule book that it uses in its communications with members. This rule change while discussing GCF repo in some detail, failed to state to the SEC anything about the significant change in the interbank clearing of GCF repo which will affect the repo market in less than three months. While the chart shows that interbank GCF repo is just 10 to 15% of total volume for GCF traded, this is a major change in the concept in how GCF repo evolved for a still very vulnerable market. This research piece while first in the series seems to play down the importance of this structural change and I am strongly suggesting that more attention should be given as to why the regulators are allowing the two banks to take such a huge step backwards. It was just a few years ago, that DTC had applied for another rule change that would have allowed the buyside Money market funds to join GCF with special membership status that would not require them to be mutualized. This rule change offered the opportunity to structurally change the workings of try-party repo market by deemphasizing the conflicted nature of the two clearing banks. The evolution of the repo markets. Dodd-Frank mandate CCP clearing of OTC derivatives but failed to consider the same solution for an even more vulnerable repo market. Repo markets have to evolve a CCP structure like the early solution of GCF repo represents. During the crisis, the two clearing banks risk managed their daylight overdraft exposures with the Fed at the cost of the various members who became hostages of the two clearing banks. One could say that liquidity for Countrywide, Bear Sterns, Lehman and MF Global was affected by the two clearing banks further exasperating the crisis. The repo markets need DTC, as a utility, to develop a CCP structure that can act as a neutral risk manager and protect the various members. The repo markets are shrinking and the weight of the regulations like the SLR will continue to affect the liquidity of the markets as was stated by NY Fed Presidents Bill Dudley in yesterday's speech in Atlanta. The Fed needs to act more forcibly to ensure that a new structure develops that can create a CCP for the repo markets or we will continue to see the market move into less stable hands of the shadow banking system. The Fed should not wait for the "street" for these forward looking solutions as they just want to protect their business models. The Fed must realize that we need structural changes in the way we clear securities and that the two bank clearing model is a too big to fail issue given the concentration of tai-party at the BNY Mellon. In the speech yesterday, President Dudley boldly stated that we need clarity of the Fed's Lender of Last of Last Resort language which was a bold statement for a Fed official. The Fed should be equally involved in developing a new structural change in a CCP clearing structure that would envision providing LOLR support to such a CCP. The Fed needs to lead the markets with a solution and while TMPG did decidedly lower the DOD by the two banks this was a behavioral change and not a structural one and could quickly reappear should a major credit event develop. It is time for the Fed to take the lead on the reform of repo clearing because the stakes are too large.