« The Rapidly Changing Nature of Japan’s Public Debt | Main | Hey, Economist! How Is the Research and Statistics Group Changing? » 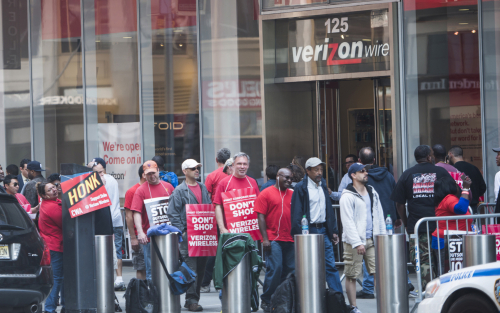 The May Indexes of Coincident Economic Indicators (CEIs) for New Jersey, New York State, and New York City, released today, show some slowing in economic growth across the region—in part reflecting the Verizon strike (which has since been settled), as well as somewhat weaker economic fundamentals. As shown in the chart below, New York City continues to be the strongest engine of growth in the region, by far, though there too, we have seen some deceleration. 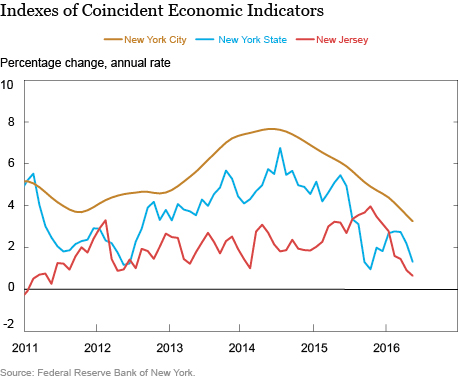 The CEIs reported here are single composite measures designed to provide a monthly reading of economic activity. They are constructed from four data series: payroll employment, the unemployment rate, average weekly hours worked in manufacturing, and real (inflation-adjusted) earnings. Details of the construction of the CEIs can be found in this 1999 report. Although the index methodology is designed to smooth out short-lived swings in economic indicators (such as labor strikes), it does not completely eliminate their effects on the index.

Based on the CEIs, growth in the region has been more subdued thus far in 2016 than it has been throughout most of the expansion. The index for New Jersey shows that the Garden State’s economy has decelerated of late: After expanding at a roughly 3 percent annualized rate in 2015, economic activity is estimated to have grown at a rate of just 1½ percent year-to-date, reflecting slowing job growth and some upswing in unemployment. Growth in the index slowed further in May, but this was likely exacerbated by the Verizon strike, which idled an estimated 5,000 workers but has since been resolved. One recent bright spot in New Jersey has been a pickup in manufacturing employment led by the state’s key chemicals/pharmaceuticals industry.

Recent trends in New York State have been fairly similar. This index showed economic activity growing at a pace of 3.5 percent in 2015 but slowing to 2.3 percent thus far in 2016. Again, a further deceleration, to just 1.3 percent in May appears to reflect the telecom strike, which idled an estimated 10,000 workers across New York State. The strike was settled in late May so its effect should be reversed in June, in which case the growth rate of this index would pick up at least a bit.

The index for New York City has also decelerated noticeably thus far in 2016, though the pace of growth remains a whole lot higher than in either New Jersey or New York State—as has been the case throughout this expansion. The index shows growth in the Big Apple’s economy, which had exceeded a rate of 5 percent for most of 2015, slowing to below 4 percent—which is still pretty strong—thus far in 2016. Even with the strike, growth was still above 3 percent in May.

All in all, May’s report shows that the pace of growth in economic activity has slowed thus far in 2016, though the sluggish growth in May was likely driven, at least in part, by the telecom strike. Updates to the regional CEIs are provided on a monthly basis.