Although the exact terms and conditions for each government mortgage insurance program are different, a common thread is that their borrower profiles are generally quite risky. These loans are typically characterized by significant leverage and borrowers often have checkered credit histories as evidenced by very low credit scores. For example, the FHA program allows for mortgages with an original loan-to-value (LTV) ratio of up to 96.5 percent; and such loans are also subject to an upfront mortgage insurance premium that is typically rolled into the loan balance, which further raises the initial LTV.

The lack of upfront equity implies that FHA mortgage borrowers are at greater risk of default than conventional mortgage borrowers. Highly leveraged borrowers might also be expected to behave like “renters with debt,” as opposed to “owners with equity,” and hence not generate the perceived social benefits of homeownership early in the life of the mortgage. These highly leveraged government-insured loans are also typically issued to borrowers with weak to poor credit histories, further increasing the risk of default and foreclosure. Borrowers with poor credit histories are more likely to face adverse income shocks and the combination of negative equity and a high risk of adverse income shocks implies that these mortgages are at high risk of default.

The table below summarizes annual data for Ginnie Mae securitized loans included in the Lender Processing Services (LPS) data that were originated between 2000 and 2011. Before the start of the housing bust in 2007, the median LTV for these loans was generally around 98 percent and the borrower’s median credit score was below 650. More striking is that in several years more than 10 percent of government-insured loans had LTVs over 101 percent and one-quarter were made to borrowers with FICO scores in the low 600s and below. 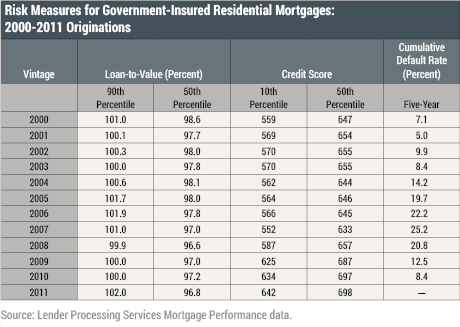 In the post-crisis period after 2008, borrower credit scores for Ginnie Mae-securitized mortgages were markedly higher across the board. This evolution likely reflects both supply-side and demand-side factors. On the supply-side, mortgage originators may have established minimum FICO cutoffs in an effort to reduce compliance risk. In the underlying data you clearly see a lower FICO bound of 620 for loans originated after 2008, which suggests this may have been the case. On the demand-side, there was substitution by borrowers with higher credit scores toward government mortgage insurance as the private mortgage insurance industry retrenched by markedly raising premiums and limiting access in the hardest-hit geographic areas.

The use of government mortgage insurance programs has varied significantly in recent years. During the housing boom from 2000 to 2005, such loans comprised less than 3 percent of mortgage originations, as the privately insured subprime market accounted for about 20 percent of new loans. However, after the collapse of new subprime lending in 2007, government insurance programs rapidly expanded and more than filled the void. The chart below illustrates these patterns. The market share of government-insured mortgages reached a peak of almost 35 percent in 2009, and has held relatively steady at around 20 percent over the past four years. 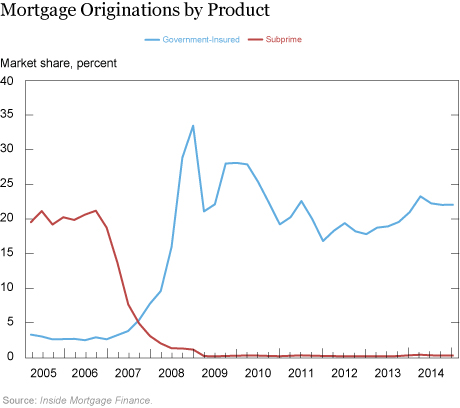 The extinction of the private subprime market and the rapid rise of the government insurance programs may strike many as a largely positive development. After all, it was the subprime segment of the mortgage market that triggered the global financial crisis and subsequent Great Recession as subprime loans defaulted at an astronomical rate during the housing bust. However, while government-insured mortgages are typically underwritten with more rigor and discipline than private subprime loans, they are not low-risk loans. The combination of high leverage and low credit scores documented above translates into extremely high default rates. The table above shows that five-year cumulative default rates (CDRs) by year of origination varied between 5 and 25 percent over our sample period. To put these numbers into perspective, the five-year CDRs associated with loans insured by Fannie Mae and Freddie Mac (the housing government-sponsored enterprises, or GSEs) are typically an order of magnitude lower. According to our calculations, the 2002 and 2009 vintages of GSE loans had five-year CDRs of approximately 2 percent, while Ginnie Mae’s same vintages had five-year CDRs of almost 10 percent and 13 percent, respectively.

The CDRs associated with government programs presented in the table above vary significantly over time, likely due to changes in house prices, as loan characteristics were largely constant (except for higher FICO scores in the post-2009 vintages). The strong house price appreciation from 2000 to 2005 helped borrowers build equity and avoid default. The house price collapse that began in 2006, by contrast, quickly placed many of these borrowers in positions of deep negative equity. The elevated default rates—and more specifically loss rates—for government-insured mortgages originated from 2007 through 2009 ultimately resulted in the FHA’s Mutual Mortgage Insurance Fund requiring financial assistance from the federal government in 2013. (To make matters worse, the default rates reported in the table above understate the share of borrowers who default, since loans that are refinanced within FHA are treated as a successful payoff, even if the refinanced loan that replaces it subsequently defaults.)

Government mortgage insurance programs are largely used for very high LTV loans, although borrower credit scores demonstrate significant dispersion. The table below, which presents five-year CDRs for various credit score ranges, shows the important relationship between credit scores and government mortgage performance. While the proportions of defaults vary significantly within categories over time, the levels also shift across categories in expected ways (for example, lower FICO loans persistently default at a higher rate than higher FICO loans). We see that loans obtained by borrowers with FICO scores lower than 600 are by far the most risky segment of the credit score distribution, as their five-year CDRs peaked at more than 40 percent in 2007.

Very high default rates are costly to the government programs and the affected households. Furthermore, research conducted since the mortgage foreclosure crisis began in 2007, suggests that there are significant negative effects on neighborhoods and communities from high rates of concentrated defaults and foreclosures. A policy intended to increase the homeownership rate will only be effective if it both makes homeownership more affordable and more sustainable. One way to focus on sustainability would be to have the FHA impose a cap on the borrower’s expected CDR at the time of the mortgage origination. The expected CDR should reflect the borrower’s credit score, the LTV on the mortgage and the economic outlook. An acceptable cap on the expected CDR should balance the benefits of increased access to homeownership against the personal and social costs of foreclosure when the homeownership ends in default. Affordability has the biggest impact if the household’s ownership experience is a success.