Is There Discount Window Stigma in the United Kingdom? -Liberty Street Economics 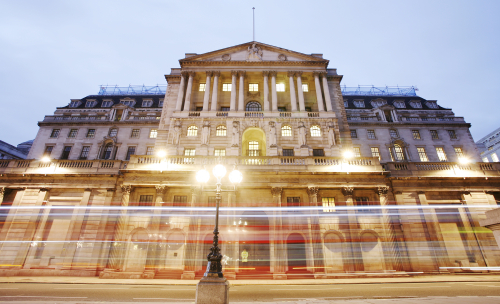 Before the Barclays episode, we do not find any reference to stigma associated with the BoE’s bilateral lending facilities in either the media or in academic literature. By contrast, concerns regarding DW stigma at the Fed date back to the 1920s. Three aspects of the BoE’s policies may have contributed to the apparent lack of concern about stigma, at least during the early history of the BoE, as we further discuss below. As compared to the Fed, the BoE better integrated bilateral lending activities into its monetary policy implementation framework; did not always separately disclose bilateral lending activities; and adhered more closely to classical lender-of-last-resort principles but without attaching onerous restrictions that might send mixed signals about the appropriateness of borrowing from the central bank. 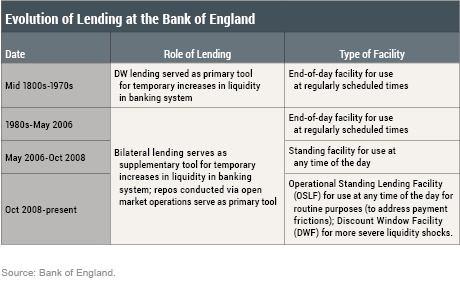 Disclosure of Lending Data until 2006
The BoE and the Fed also differed in their disclosure practices before 2006. Since the Bank Charter Act of 1844, the BoE was required to publish a weekly summary of its key assets and liabilities, known as the Bank Return. The Bank Return was similar to the Fed’s weekly release titled “Factors Affecting Reserve Balances of Depository Institutions and Condition Statement of Federal Reserve Banks,” and included a line item on the level of loans outstanding each week. Before the 1980s, DW lending accounted for all of the outstanding loans shown in the Bank Return. However, starting in the 1980s, as the BoE lent increasingly through repos in the open market, the line item also began to include these operations without separating the various types of lending activities (see the chart below). The Fed, by contrast, has always separated the various lending activities in its weekly release. The upshot is that for close to thirty years, the BoE in effect did not separately disclose lending information by type, limiting the potential for individual borrowers to be identified and potentially stigmatized. 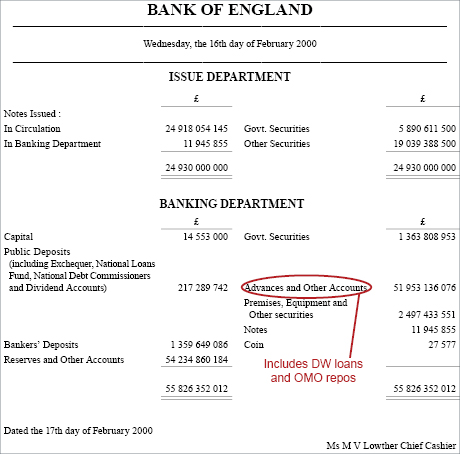 BoE’s Lending Facilities since 2006
In 2006, the BoE replaced the end-of-day bilateral lending operations with a standing bilateral lending facility, for use at any time of the day, akin to the standing facility at the Fed. Lending under the new standing facility became less routine and more separated from open market operations. Since the new facility was rarely if ever used, any borrowing drew attention. At the same time, the BoE also started disclosing standing facility loans separately from open market repos in the Bank Return (see the chart below), drawing further attention to such borrowings. Even though the Bank Return does not actually name borrowers, market participants can sometimes deduce them. 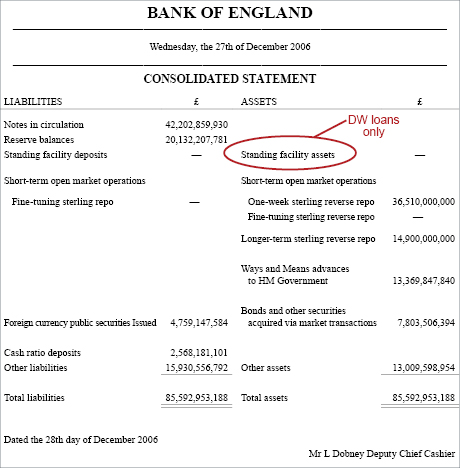 In August 2007, Barclays’ sudden borrowings under the standing facility received wide media coverage. Although Barclays borrowed due to a technical breakdown of the U.K. clearing system and was not in financial trouble, other banks reportedly became reluctant to use the facility to avoid possible stigma.

To mitigate the stigma of borrowing from the standing facility, the BoE in 2008 renamed the facility as the Operational Standing Lending Facility (OSLF) to clarify its purpose as a facility for routine frictional payment shocks. A separate DW Facility (DWF) was introduced for lending for more severe liquidity shocks, and it typically lent gilts against a wider set of collateral.

The BoE also changed its disclosure policies. The requirement to publish the Bank Return—in place for 165 years—was lifted by the 2009 Banking Act. Although no longer legally required, the BoE has continued to publish the Bank Return (renamed the Weekly Report) but without disclosing bilateral lending information. Aggregate data on its bilateral lending activities are now disclosed with longer lags, thus limiting the potential for stigma.

Punitive Lending Rates
Finally, the BoE has consistently—before and after 2006—charged a punitive or “penal” rate on late day and other bilateral loans. This approach obviated the need for moral suasion or administrative restrictions to limit borrowing. Prior to the 1980s, the BOE’s policy rate represented the DW lending rate and was usually 50 basis points higher than the prevailing market rate. Since the 1980s, the BoE maintained a separate rate for late-day-bilateral loans that was as much as 100 basis points above the policy rate (see the chart below). In contrast, the rate on Fed DW loans was consistently below market rates until 2002. To prevent excessive or opportunistic borrowing, the Fed had to ration through highly intrusive, administrative restrictions, which sent mixed signals about the appropriateness of borrowing from the facilities. 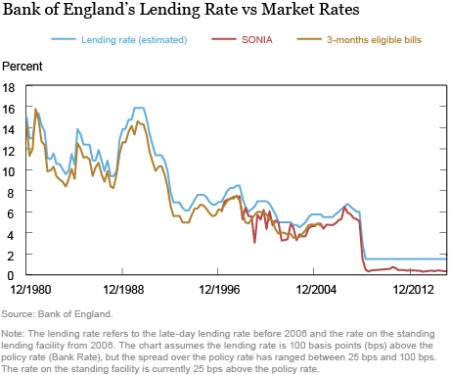 DW Stigma Today
Concerns about stigma associated with the BoE’s standing lending facility came to the forefront during the financial crisis of 2007. In the 2012 Winters Report, which reviewed the BoE’s framework for providing liquidity to the banking system, it was noted that since the standing facility was recast in 2008, it was, for the most part, working as intended though there continue to be lingering concerns among a few banks. The report further indicated that borrowing at the BoE’s other DW facility, which was intended for more severe liquidity shocks, has become stigmatized. Similarly, anecdotal evidence suggests that the Fed’s DW facility also remains stigmatized.

Both at the BoE and the Fed, the rise of open market operations as the main tool of monetary policy has coincided with a reduced reliance on bilateral lending activities. Less frequent, less routine bilateral lending has, in turn, coincided with the rise of stigma concerns. In other words, stigma with bilateral lending may be due in part to its diminishing role in monetary policy. It may be that the solution hinges on reforming loan provision and disclosure practices to make it more difficult for individual borrowings to be identified and thereby stigmatized. In this context, it is interesting to note that the Fed’s Term Auction Facility, introduced after the crisis in December 2007, provided loans via an auction rather than bilaterally and appears to have substantially reduced or eliminated stigma. An auction-based facility may potentially better mitigate the stigma of borrowing from a central bank, provided there is active participation in the auctions.