At the N.Y. Fed: Second Annual Conference on the Evolving Structure of the U.S. Treasury Market -Liberty Street Economics

At the N.Y. Fed: Second Annual Conference on the Evolving Structure of the U.S. Treasury Market 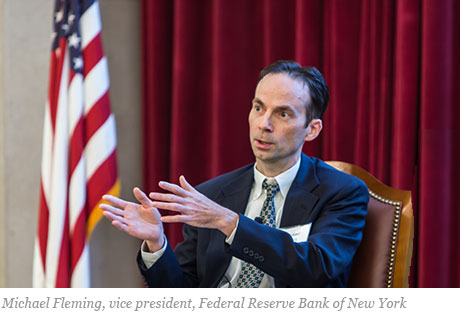 The agenda began with introductory remarks from William Dudley, the New York Fed president, in which he discussed the importance of interagency collaboration and engagement between the official sector and the public to help shape the evolution of the Treasury market. Antonio Weiss, counselor to the Treasury secretary, then discussed recent progress on collecting transaction-level Treasury data for the official sector, improved oversight of market participants, and the benefits of (and management of the potential risks of) disseminating post-trade transaction data to the public. His remarks were followed by a panel discussion on the issues involved in designing and implementing transaction-level public data reporting.

In the morning keynote address, Timothy Massad, chairman of the CFTC, reviewed tools the agency uses to analyze flash events, explained how such work relies on timely access to detailed data, and discussed how the regulatory structure needs to adapt to reflect the speed and complexity of today’s markets. His address was followed by a panel discussion on Treasury secondary market clearing practices and potential ways to improve the clearing of transactions executed on the interdealer brokerage platforms where growth in decentralized clearing may have increased aggregate counterparty risk.

In the lunch keynote address, Mary Jo White, the SEC chair, discussed how regulation of the equity markets could serve as a model to strengthen the Treasury market by enhancing trade reporting, bolstering the regulatory regime for government securities trading platforms, and improving oversight of the market intermediaries that act as brokers and dealers. Her address was followed by a panel discussion on the future of Treasury market settlement in light of JPMorgan Chase’s announced plans to stop, through a careful multi-year transition process, settling government securities transactions for dealers. In this session’s opening remarks, Jerome Powell, a member of the Board of Governors of the Federal Reserve System, explained how the Federal Reserve is working closely with the U.S. Treasury and the sole remaining provider to ensure the continued reliability and resilience of these vital services.

The last panel discussion of the day discussed the ways in which Treasury markets may evolve and the implications for market liquidity, potential risks, and oversight. In concluding remarks, Daleep Singh, Treasury acting assistant secretary for financial markets, discussed some of the U.S. Treasury’s recent debt management initiatives as well as efforts to foster market liquidity by promoting more resilient intermediaries, funding mechanisms, and infrastructure.

Please see the forthcoming conference summary, which we will post in the events section of the New York Fed website, for additional details.

Ellen Correia Golay is a manager in the Federal Reserve Bank of New York’s Markets Group.

I think Treasury markets may evolve...But how to foster market liquidity?