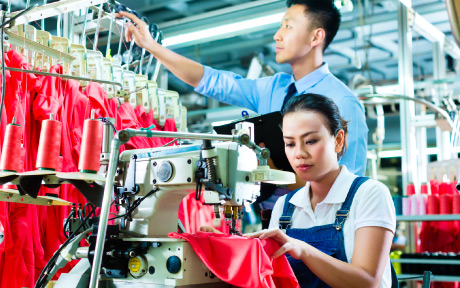 Taking the U.S. Market by Storm—And Then, Not so Much
The United States had a merchandise trade deficit of $350 billion with China in 2016, accounting for roughly half of the overall U.S. trade deficit. The import growth of goods from China has been impressive, with imports from China growing at an annual rate of 14 percent since 1990, while total U.S. imports were growing at an annual rate of only 6 percent. That is, China has had great success in selling to the United States by taking market share away from other countries.

A breakdown of U.S. imports into the four largest categories, accounting for roughly two-thirds of the total, demonstrates the source of this success. As seen in the chart below, China’s import shares for apparel, electronics, electric machinery, and non-electric machinery were all fairly high in 2002, the beginning of the data series used here, and continued to increase. In 2002, China accounted for 25 percent of all U.S. apparel imports and 15 percent of all electronics imports. By 2010, these shares were up to 50 percent and 40 percent, respectively. Market-share increases in general machinery and electrical machinery were less dramatic but still substantial over this period, rising by 8 percentage points (to 15 percent) and 11 percentage points (to 35 percent), respectively. 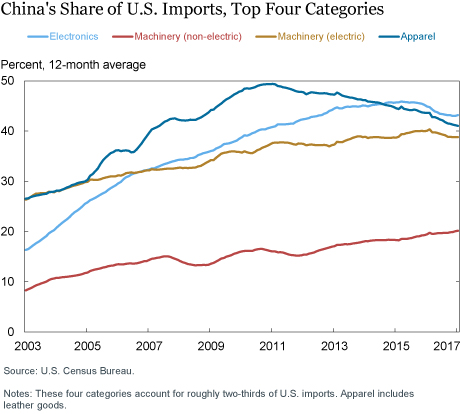 Around 2010, China’s ability to gain market share from other imports faltered. The import share for Chinese apparel has dropped over the past five years, while the share for electronics, by far the largest of the four categories, declined last year. China’s share of the U.S. electric machinery market is showing tentative signs of falling and its gains in the non-electric machinery category have ended.

Limits to China Increasing Its Market Share
It is not a complete surprise that Chinese goods would eventually peak as a share of U.S. imports. To keep increasing their share of the U.S. import market, Chinese firms would need to gain sales by competing more directly against manufacturers in Europe, Japan, and other advanced economies. China would also need to successfully compete against other developing countries with lower labor costs. Indeed, China has been ceding market share to Vietnam for electronics and electrical machinery, while India and Bangladesh have been making gains in apparel. It may be the case that assembly operations are moving from China to lower-wage countries, repeating the process that previously benefited China.

The challenge for China is that its exports to the United States are now only growing as fast as total U.S. imports since its goods are no longer displacing those from other countries. From 2000 to 2010, U.S. imports from China grew at a 20 percent annualized rate. From 2010 to 2016, the rate of growth dropped to 4 percent. This slowdown has also hit China’s exports (in U.S. dollars) to the rest of the world, which slowed from a 21 percent annual growth rate in the 2000-10 period to 5 percent since 2010.

Measuring the Impact of Slower Export Growth Is a Challenge
When evaluating the slowdown in China’s exports, it is important to recognize that trade data measure the value of goods that arrive from a particular country, not that country’s contribution to the item’s value. For example, if a U.S. import from China is largely made of components produced in Japan and assembled in China, then the import data would significantly overstate the revenue that ended up in China from that sale.

Cross-border supply chains are motivated, in part, by differences in labor costs, with components manufactured using high-wage labor and the assembly of these parts done in low-wage countries. This processing of components into final goods has been an important attribute of Chinese exports. The chart below shows that exports of such goods peaked in 2000 at almost 60 percent of China’s total exports. So, to the extent that China’s export growth figures reflect trade in processed goods, they overstate the domestic gains China has realized from these export sales when taken at face value. 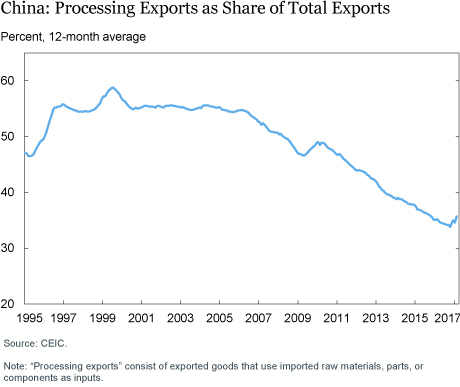 More recently, however, the data show a significant decrease in China’s processing trade amid an overall slowdown in export growth. Processing exports fell to 50 percent of China’s total exports in 2010 and then declined rapidly, hitting 35 percent in early 2017. This transformation partly reflects rising wages in China (as the skill level of its workers increases) and the related migration of assembly operations from China to lower-wage countries. A positive take on these developments is that each dollar of exports now has a larger positive impact on domestic income. The negative take is that China’s much more modest export performance is, in part, due to the loss of processing exports that would have otherwise been a source of income.

Challenge for China
Exports have been a great boost to China’s economic development, with rapid increases in foreign sales helping to transform the economy into a major producer of the world’s manufactured goods. The slowdown in export growth in recent years has been substantial and highlights the difficulties of trying to compete in foreign markets against both high- and low-wage countries. One of the consequences of the end of China’s export boom is that it puts more pressure on domestic demand to sustain the country’s rate of growth.

It is worth tapping into the world input-output table to track the development of value added in China's exports to the US.