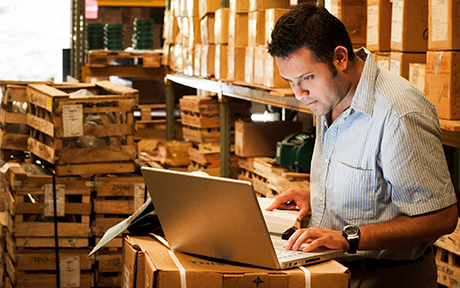 In order to be eligible for the duty-free imports under NAFTA, member countries must abide by rules of origin, which detail the conditions under which a product qualifies for NAFTA preferences. These are complex rules, applied on a product by product basis, and include requirements to ensure there is sufficient value added within the member countries. Tightening rules of origin, which effectively raises the cost of trade, is unlikely to increase trade or lower the trade deficit, but is very likely to disrupt supply chains.

Supply chains dominate U.S.-Mexican trade under NAFTA
Mexico is a top U.S. trade partner, especially important for supply-chain trade. Mexico accounts for about 14 percent of both U.S. exports and imports. A large share of U.S. trade with the world, and especially with Mexico, is part of global supply chains, where one input is produced in one part of the world, then shipped on to another country, and so on. Because the factory is now global, the same product can be shipped back and forth across the same borders multiple times.

The importance of U.S.-Mexico supply-chain trade is shown in the table below, which presents aggregate statistics on U.S. trade. Forty percent of imports from Mexico and 75 percent of exports to Mexico are in intermediate inputs, at least as high as the world average. These are products, like auto parts or computer components, that are used in the production of final goods. In addition, a great deal of the trade takes place within firms, as demonstrated by the high shares of related-party trade (trade within firms with at least 10 percent ownership in the trading partner) and affiliate trade. Firms such as General Motors and Ford send auto parts back and forth across the border as cars are produced, using a regional supply chain, which makes production more efficient, lowers the cost of cars to the consumer, and makes firms more globally competitive. If it becomes costlier to access intermediate inputs, this can cascade down many stages of the production chain and disrupt the production of the final good. These trading relationships are particularly important in the auto industry, which accounts for 60 percent of majority-owned affiliate trade. 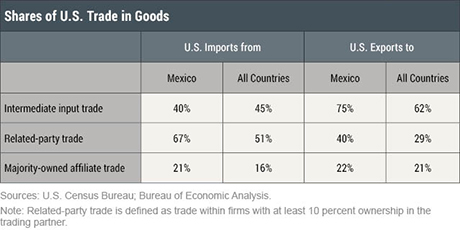 The cross-industry variation can be seen in the chart below, where the blue bars depict the share of each industry in total U.S. imports from Mexico and the gray bars are the U.S. export shares to Mexico. U.S. production and consumption depend heavily on imports of transport and electrical equipment from Mexico, while Mexico is especially dependent on imports of chemicals from the United States.

The darker shaded parts of each bar depict the related-party share. The high shares of related-party trade in transport, electrical, and machinery highlight the importance of global supply chains in these industries. 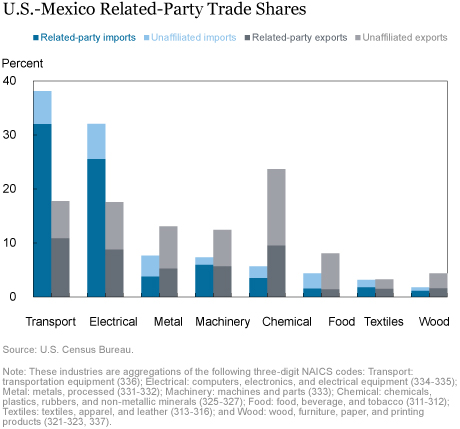 Supply chains support U.S. exports
Low-cost inputs from Mexico help U.S. producers compete efficiently in global markets. The U.S. industries most heavily dependent on imported inputs from Mexico can be identified using input-output tables. The table below shows that ten (out of 205) industries obtain more than 10 percent of their total intermediate inputs from Mexico. For example, for audio/video manufacturing, 18 percent of total inputs come from Mexico—that amounts to a third of all the imported inputs used by that industry. Most of these audio/video products are destined for the export market, with half going to Mexico. In other examples of products with a high imported input content, like dental equipment, the product is mostly for U.S. domestic consumption, where imported parts help lower production costs and hence prices. This illustrates the interconnectivity of trade. These ten industries alone account for 10 percent of total U.S. exports. Any policies that would make it more costly to import these inputs, for example, through higher border taxes or tougher rules of origin, would not only hurt U.S. imports but also hurt U.S. exports. 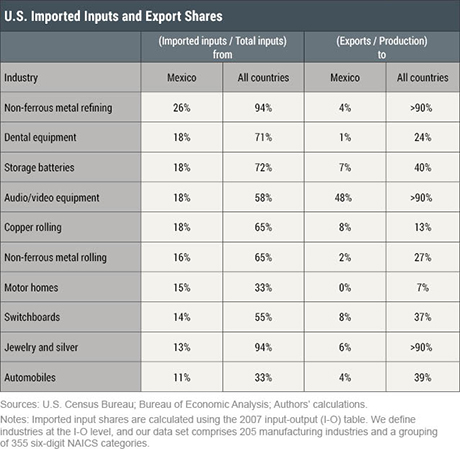 Global Supply Chains and the Trade Balance
It is common for a large developed country like the United States to have a trade deficit with the low-cost supplier in its production chain. As shown above, U.S. producers benefit from importing parts from Mexico and building high quality goods, some of which are consumed locally and some of which are exported. The deficit with Mexico is like the deficit of any large company with its suppliers; the company purchases inputs, but sells little to these smaller firms.

Bilateral deficits matter little for the aggregate trade balance. For example, Germany, despite running a large aggregate trade surplus, runs bilateral trade deficits with Czech Republic, Slovakia, and Hungary, the main low-cost suppliers in the European production chain. Consider autos, where the Czech Republic is the largest supplier to Germany. The chart below shows the trade balance relative to total trade in the transport sector (HS87) for the U.S. with Mexico and Germany with the Czech Republic, where year zero is the implementation of the respective trade agreements (1994 for NAFTA and 2004 for EU accession). As supply chains have developed, trade imbalances in the sector expanded, contributing to the increasing competitiveness of U.S. and German manufacturers. 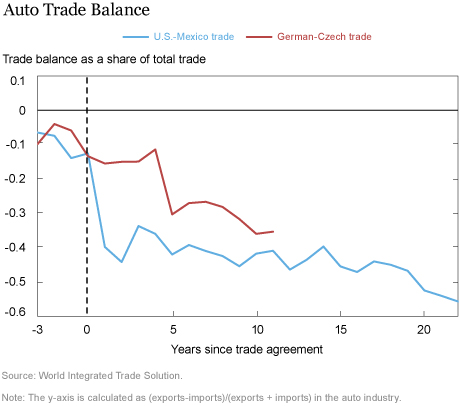 NAFTA already has strict rules of origin
The extensive supply chains in NAFTA have developed around the existing rules of origin, which grant duty-free access only to locally produced or transformed goods. ROO are used in all free trade agreements because the applied tariffs of member countries differ. Without ROO, products could be imported into a member country with the lowest tariff and then exported to a higher tariff member country under preferences, thus escaping the duties. While rules of origin are allowed to prevent against this so-called trade deflection, they should not be used to distort international trade, according to international rules.

Despite World Trade Organization guidelines, rules of origin are sometimes designed to protect special industries. For example, an auto must contain 62.5 percent NAFTA content to bypass member-country tariffs. While retaining a high share of value added in the North American supply chain has benefits, it also has costs. Companies are required to maintain extensive spreadsheets recording the origin and value of all parts at the plant level, even sometimes breaking individual parts down into the share that is local. Keeping tabs on origin is time-consuming, especially when parts are sourced from multiple suppliers. It also means companies sometimes use more expensive local parts to qualify for NAFTA preferences. Additional complications arise from overlapping trade agreements and rules of origin. Some products that qualify for special treatment in one market may need to be altered to qualify as local in another FTA market. For all these reasons, international rules stipulate that ROO must be transparent and predictable.

NAFTA already has relatively strict rules of origin. Research comparing eight types of free trade agreements, including pan-European pacts, finds that NAFTA has the strictest and most complex rules of origin. Because it is costly and time-consuming for companies to adhere to rules, preferences are not always utilized. Across more than 3,500 products imported from Mexico that have positive most-favored nation (MFN) tariffs, on average 20 percent enter the U.S. without taking advantage of preferences.

If rules are strengthened, it is likely that a greater share of imports would enter both the United States and Mexico without using NAFTA preferences. The result would be that many of those parts and components now crossing the border duty-free would instead cross under MFN tariffs, but without adhering to the ROO. Once preferences are not utilized, it no longer matters where products come from—local content becomes irrelevant. Thus, some intermediate inputs will simply be imported from countries outside NAFTA. Stricter rules can thus perversely result in lower local content. Because trade on both sides of the supply chain would be affected by a change in rules, it is unclear what would happen to the bilateral deficit.

Strengthening rules of origin does not guarantee that the bilateral trade deficit will fall, though by raising the cost of trading across borders, stricter rules are likely to be associated with less trade and supply chain disruption.

Mary Amiti is an assistant vice president at the Federal Reserve Bank of New York’s Research and Statistics Group.

Caroline L. Freund is a senior fellow at the Peterson Institute for International Economics.

Tyler Bodine-Smith is a senior research analyst at the Federal Reserve Bank of New York’s Research and Statistics Group.