« At the N.Y. Fed: The Evolution of OTC Derivatives Markets | Main | Household Borrowing in Historical Perspective »

Do Credit Markets Watch the Waving Flag of Bankruptcy?

This bankruptcy flag is visible to creditors and, according to the credit bureaus, hurts filers’ credit scores. To limit these effects, the Fair Credit Reporting Act restricts the length of time that credit bureaus can fly these flags on reports for each (personal) bankruptcy chapter: the flag for Chapter 7—in which debtors get a full discharge of (unsecured) debts after unprotected (non-exempt) assets are liquidated—must be removed after ten years, while the flag for Chapter 13—a partial debt repayment bankruptcy designed to help people keep their homes—is typically removed after seven years. For economists, the fixed timing of the flag removal (and the difference across bankruptcy chapters) gives us a laboratory to explore how the lifting of bankruptcy flags affects borrowers’ credit scores and credit outcomes, by comparing these outcomes directly before and after flag removal. 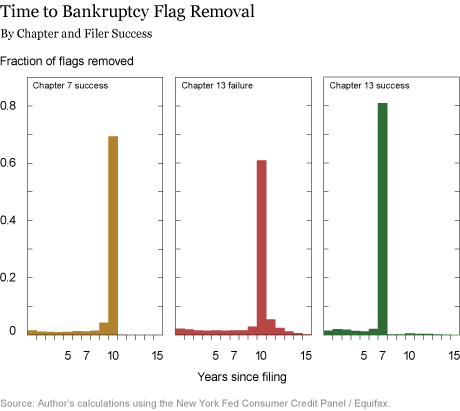 Comparing credit score dynamics for these three groups reveals some interesting behavior, shown in the chart below. All three sets of debtors see their credit scores (measured using the Equifax Risk Score) drop almost 100 points over the four years before filing, but with a partial recovery afterward. For successful Chapter 7 and Chapter 13 filers, the recovery likely stems from the successful discharge of debt—many delinquent debts are removed from the report upon filing, which leaves the debtor better positioned to repay remaining or new debts—as well as the fact that filing for bankruptcy puts limits on a person’s ability to file again in the near future. For unsuccessful Chapter 13 filers, however, the cause of the rebound is less clear since they did not have debt discharged. The small rebound may be the result of debts being written off by creditors, and hence removed from the debtors’ file at the credit bureau. Over time, debtors continue to rebuild their credit back to initial levels, and at flag removal (seven years for successful Chapter 13 and ten years otherwise), there is a bump in credit scores. This bump is largest for the successful filers—jumping from around 610 to 620—and smallest for the unsuccessful Chapter 13 filers. 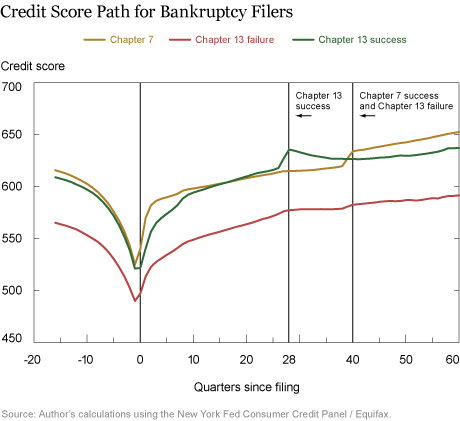 Benefits from the Bump
Does the bump in scores help debtors gain access to credit? In the next chart, I plot the total credit card limits for the two successful bankruptcy filing groups, zoomed in at twenty quarters after filing and onward. While there is no immediate, corresponding jump in the credit limits for either group, successful Chapter 7 and Chapter 13 filers see an inflection in the credit limits, suggesting that debtors are able to translate the higher credit scores into a larger amount of credit. 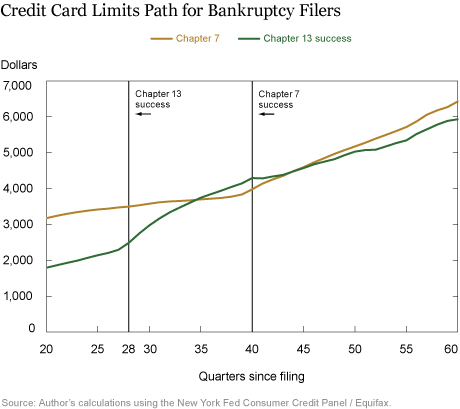 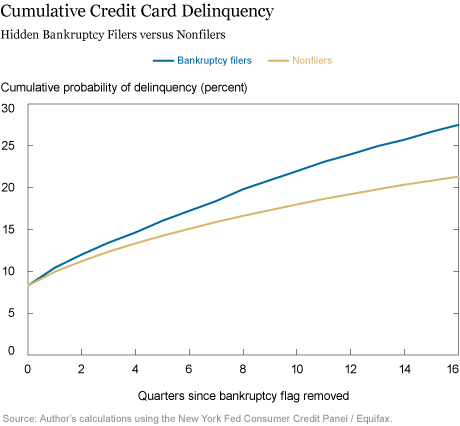 Further Results
These results highlight several important facts about bankruptcy filers and the effect of bankruptcy flag removal. First, the addition of the bankruptcy flag typically only occurs after consumers’ credit scores have fallen tremendously, and, in fact, debtors’ scores tend to improve afterward. Second, the removal of the flag does cause creditors to view these debtors as more creditworthy. Third, it appears that “hidden” bankruptcy flags could be informative.


How to cite this blog post:
Paul Goldsmith-Pinkham, “Do Credit Markets Watch the Waving Flag of Bankruptcy?” Federal Reserve Bank of New York Liberty Street Economics (blog), May 15, 2017, http://libertystreeteconomics.newyorkfed.org/2017/05/do-credit-markets-watch-the-waving-flag-of-bankruptcy.html.
Posted by Blog Author at 07:00:00 AM in Credit, Household Finance