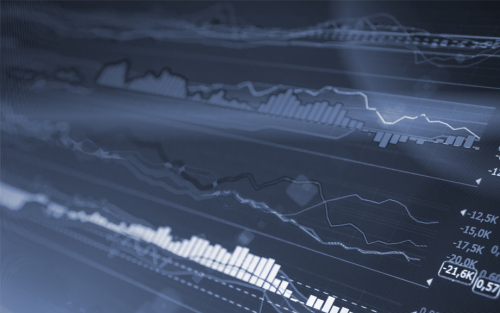 Interest rates in the United States have remained at historically low levels for many years. This series of posts explores the forces behind the persistence of low rates. We briefly discuss some of the explanations advanced in the academic literature, and propose an alternative hypothesis that centers on the premium associated with safe and liquid assets. Our argument, outlined in a paper we presented at the Brookings Conference on Economic Activity last March, suggests that the increase in this premium since the late 1990s has been a key driver of the decline in the real return on U.S. Treasury securities.

Recognizing that persistent low rates have important implications for fiscal and monetary policy, economists have put forward many explanations for the secular (long-term) decline in real interest rates. One of the most influential, proposed by Laubach and Williams, is that the decline is connected to the fall in the economy’s potential growth rate. Others have emphasized the role of demographic factors, and in particular the aging of the population, which tends to increase desired saving and hence to depress real interest rates. Another potential cause of the decline in real rates is the increase in income inequality: a larger fraction of income is now concentrated in richer households, which have a higher propensity to save. Finally, some have argued that the low real rates reflect “secular stagnation,” a chronic situation of aggregate demand deficiency that cannot be remedied by a fall in the real interest rate, partly because of a binding lower bound on nominal interest rates.

One important feature of the factors we just mentioned is that they should contribute to a lowering of all rates of return. In fact, the evidence suggests that the yields on Treasury securities have declined more than yields on comparable assets, such as corporate bonds. The chart below demonstrates this discrepancy by plotting the spreads between the yields on Baa and Aaa corporate bonds on the one hand and Treasuries of roughly comparable (that is, twenty-year) maturity on the other. It is well-known that these spreads fluctuate significantly over the business cycle, as is illustrated by the big spikes around the Great Recession. However, the chart also shows a rising trend in these spreads in the second half of the 1990s, emphasized by the two arrows. The implication of this trend is that Treasury yields have declined significantly more than yields on corporate bonds since the late 1990s.

What explains this secular decline in the interest rate paid on the securities issued by the U.S. Treasury, compared with the one that investors demand to lend money to large, reliable U.S. corporations such as those that command an Aaa rating? Our explanation is that the rising spreads reflect an increase in the premium associated with the special safety and liquidity characteristics of U.S. Treasury securities relative to assets with identical pecuniary returns but no such special attributes—what Krishnamurthy and Vissing-Jorgensen refer to as the “convenience yield’’ of Treasuries. In their seminal contribution, these authors showed that this convenience yield has been sizable on average over the postwar period. We show that it has also been trending up since the late 1990s, and that this rise has been an important driver of the decline in the real interest rates on Treasuries.

Intuitively, the fall in Treasury yields, and the corresponding increase in the securities’ value, reflects a surging mismatch between the demand and supply of the safety and liquidity services provided by U.S. Treasuries. Since the late 1990s, with the acceleration in global financial flows and their re-direction toward safer uses following the Asian financial crisis, a rising tide of international saving has been chasing a limited supply of safe and liquid assets. Moreover, this supply has been further curtailed by the realization during the global financial crisis that many assets previously considered to be akin to Treasuries—most notably the highly rated tranches of mortgage-backed securities—were not so safe after all. The role of this shortage of safe assets has been recently explored by Ricardo Caballero and others (Caballero, Caballero and Farhi, and Gourinchas and Rey). Their view is also related to the saving glut hypothesis first proposed by Ben Bernanke. For instance, Bernanke and others provide evidence that from 2003 to 2007, foreign investors acquired substantial amounts of U.S. Treasuries, agency debt, and agency-sponsored mortgage-backed securities. In the words of Caballero (pp. 17–18), “There is a connection between the safe-assets imbalance and the more visible global imbalances: The latter were caused by the funding countries’ demand for financial assets in excess of their ability to produce them, but this gap is particularly acute for safe assets since emerging markets have very limited institutional capability to produce them.”

Safety is probably not the whole story, however. As the chart above shows, spreads have increased also for very safe securities that are not as liquid as Treasuries, such as Aaa corporates. This trend suggests an important role for liquidity as a source of the convenience yield. Liquidity has long played a prominent role in finance, as argued for instance by Longstaff, among many others. Starting with the work of Nobuhiro Kiyotaki and John Moore, liquidity has also been incorporated in modern macroeconomic models to study its role in business cycles and more recently in the Great Recession, as in this recent paper by one of us.

In the remaining posts in this series, we explore the extent and causes of the trend decline in interest rates since the late 1990s using two separate approaches: a flexible time-series model of Treasury and corporate yields, inflation, and long-term survey expectations based on a vector autoregression (VAR); and a medium-scale dynamic stochastic general equilibrium (DSGE) model that uses an extended set of macro and financial variables, including the Aaa and Baa corporate spreads highlighted above. The two approaches lead to very similar conclusions regarding the extent of the long-term decline in real interest rates. (We post the replication codes on Github; we also plan to post there regularly updated estimates of the trend in the real interest rate). Moreover, both approaches attribute much of this decline to an increase in the convenience yield on Treasuries.

As a preview of our findings, the chart below presents our estimates of the trend in the real interest rate based on the VAR (black) and the DSGE (blue) model, along with a measure of the (sizable) uncertainty around those estimates. Both models identify a steady secular decline in real rates that starts in the late 1990s and that brings them close to 1.0 percent today, from close to 2.5 percent at their peak. 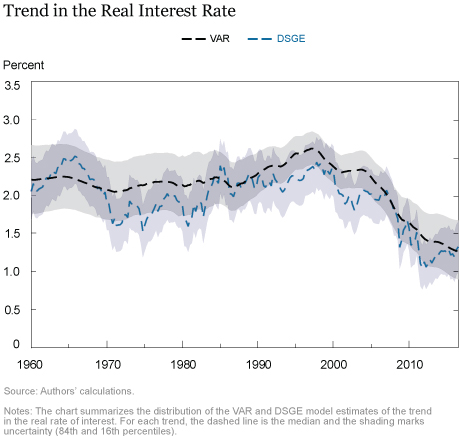 Our evidence in this post has mostly amounted to “eyeball econometrics.” The next two posts should add a little more formal meat to our arguments. Stay tuned.

Thank you for your comment. We very much agree with your interpretation: the fact that Treasuries are used as collateral is likely to be a key factor in what we call the liquidity convenience yield. Having said that, in this work we only want to point out, and quantify, the relationship between the rise in the convenience yield on the one hand and the secular decline in Treasury yields on the other. Speaking of which, a number of other readers pointed out to us that the timing of our post was curious in light of the fact that yields have risen of late (and spreads have narrowed). To this we would like to point out that our analysis in the Brookings paper did not imply that we expected the safety and liquidity premiums to remain high, and Treasury yields low, forever, but rather that liquidity and safety are important drivers of Treasury yields. As financial conditions ease, and the supply of safe assets increases, those premiums may well come down and yields correspondingly increase.

The part of the story you're missing is the growth over this time period (driven by the same underlying demands) in the use of collateral for moving wealth from those investors seeking safety to those productive agents seeking funding. UST (in the early days of your chart) and sovereigns more generally, are uniquely useful at one end of those collateral chains. In your econometric work, you will probably pick that up in your 'liquidity' variable - but causality runs both ways in a feedback loop. The securities are more liquid because they are more widely useful in collateralization, which makes them more useful as collateral, which makes them more liquid which ...

Try including high quality corporate/UST repo spreads (adjusted for haircuts) in the equation, as a proxy for usefulness as collateral.