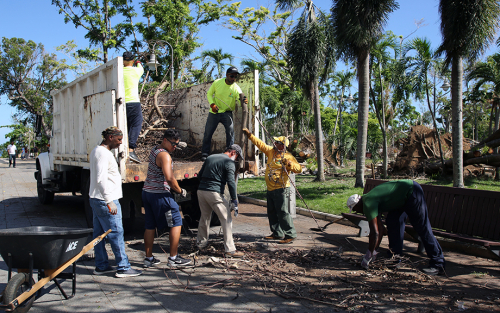 Following the hurricanes, the initial job losses in Puerto Rico totaled about 4 percent, though employment is beginning to improve somewhat. In the U.S. Virgin Islands, job losses totaled about 8 percent, with no rebound thus far. These losses are considerably steeper than what has typically been experienced after most major natural disasters that have hit the United States, but not nearly as devastating as Katrina’s unprecedented impact on the New Orleans economy more than a decade ago. That being said, domestic air passenger data suggest that from September through November more than 150,000 people left Puerto Rico, net of arrivals. The number that left the U.S. Virgin Islands was proportionally even larger. Although some of those who left were visitors returning to the mainland, many were presumably island residents. Looking ahead, recovery will be affected by a variety of factors, most notably the degree of out-migration, the level of external aid these economies receive, and the effectiveness of fiscal and other reforms—especially in Puerto Rico.

Maria was the most devastating hurricane to hit Puerto Rico in nearly a century. Many lives were lost, homes and businesses suffered enormous damage, most crops and other agricultural assets were wiped out, and a significant part of the island’s infrastructure was severely damaged. Complicating matters further, Puerto Rico experienced the most severe power outage in U.S. history, and it may still take months to fully restore electricity and other critical infrastructure. The situation in the U.S. Virgin Islands is similar, St. Thomas and St. John were ravaged by Irma, and St. Croix was devastated by Maria just two weeks later.

Fortunately, recovery is underway in both Puerto Rico and the U.S. Virgin Islands. As of January, satellite images of nighttime lights suggest roughly 75 percent power restoration for Puerto Rico overall, with the southern and western parts of the island seeing nearly full restoration, and the city of San Juan not far behind. In contrast, the eastern end of Puerto Rico and many interior areas have lagged substantially. In the U.S. Virgin Islands, power restoration has proceeded at a gradual pace.

And, as of December, the labor market has begun to recover in Puerto Rico, which is consistent with historical patterns from places that have experienced this kind of shock. Jobs in leisure and hospitality (largely restaurants)—the sector usually most affected by natural disasters—have started to bounce back in Puerto Rico but have not yet in the U.S. Virgin Islands. And as often happens following natural disasters, jobs are being added in both Puerto Rico and the U.S. Virgin Islands in industries involved in clean-up, restoration, and rebuilding efforts—most notably, construction.

All in all, Puerto Rico and the U.S. Virgin Islands have a long and difficult recovery process ahead. The ability of both places to respond to these disasters is being made all the more difficult because of poor economic and fiscal conditions before the storms. While clearly a challenge, if Puerto Rico and the U.S. Virgin Islands can implement effective economic and fiscal reforms, they can recover and even prosper.

For more information on Puerto Rico and the U.S. Virgin Islands after Hurricanes Irma and Maria, see the economic press briefing web page.