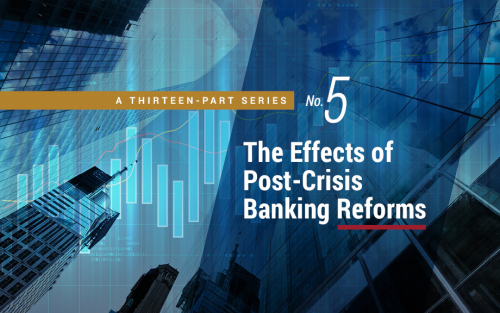 Are stock returns predictable? This question is a perennially popular subject of debate. In this post, we highlight some results from our recent working paper, where we investigate the matter. Rather than focusing on a single object like the forecasted mean or median, we look at the entire distribution of stock returns and find that the realized volatility of stock returns, especially financial sector stock returns, has strong predictive content for the future distribution of stock returns. This is a robust feature of the data since all of our results are obtained with real-time analyses using stock return data since the 1920s. Motivated by this result, we then evaluate whether the banking system appears healthier today, and if recent regulatory reforms have helped.

In our case we utilize the approach taken in Adrian, Boyarchenko, and Giannone (2017), which is a fairly straightforward and computationally convenient way of constructing conditional forecast distributions based on a user-specified choice of predictor variables. To give a few examples, the charts below show the conditional density forecast in the fourth quarter of 1993 and the fourth quarter of 2008 using the volatility of financial sector stock returns as the predictor variable. As a comparison they also show the unconditional forecast distribution. The unconditional forecast simply takes the historical probability of an event and assumes that that probability applies in the future. 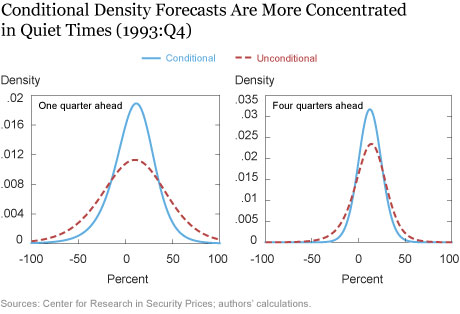 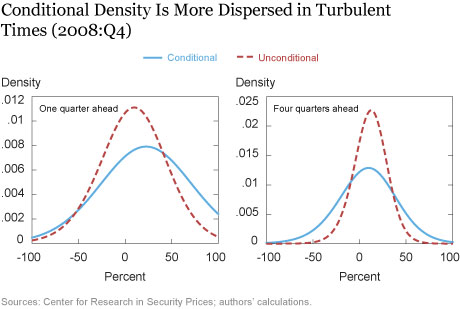 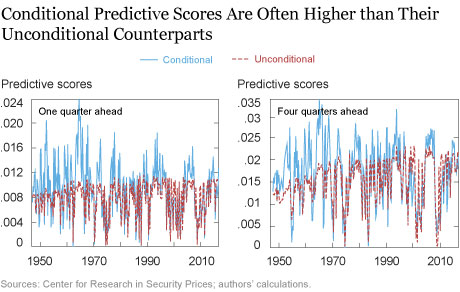 In the paper we also consider a wide variety of other economic and financial predictors. We find some evidence of predictability using total stock market volatility and other potential indicators of financial conditions such as the BAA–AAA credit yield spread. However, across a number of real-time forecasting exercises, the clear winner is the volatility of financial sector equities.

Given that the volatility of the financial sector is relevant to broad market risk, it is natural to ask how the volatility of publicly traded banks may have changed since recent regulatory reforms were implemented. That is, have reforms helped reduce risk? To address this question we test for changes associated with the enhanced regulatory and supervisory requirements of the Dodd-Frank Act (DFA) for banks with more than $50 billion in assets. We use a differences-in-differences-in-differences approach, which can be understood as comparing the volatility in returns of these large banks before and after the DFA to those of small banks and large nonbanks. Our estimates imply a 9.1 percent differentially lower volatility in the post-DFA period for these large banks. Based on this result, we would conclude that recent regulatory reforms of the financial system are associated with an improvement in the risk of banks. And, given the relationship we found using out-of-sample tests and a time series of stock returns since the 1920s, it appears that the DFA might also be associated with an improvement in broader stock market risk.

Sean Hundtofte is a former economist in the Research and Statistics Group.