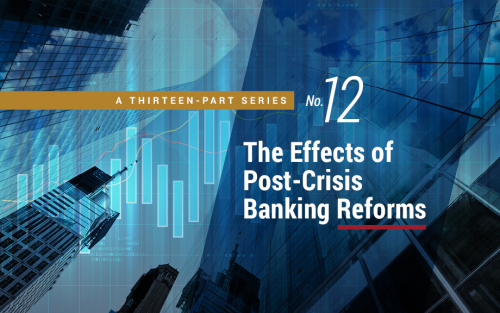 Trading Corporate Credit Risk
Financial institutions face a choice of which market to use to assume corporate credit risk. Corporate bonds and loans provide direct exposures to corporate credit, while CDS, options written on CDS, and equity options provide derivative exposures. In our work, we focus on strategies that involve the most prevalent types of credit-linked assets: single-name CDS contracts, index CDS contracts, and corporate bonds, as these represent the most direct form of tradeable exposures.

Studying Portfolio Allocation Decisions
To study institutions’ portfolio allocation decisions, we combine corporate bond and CDS data sets at the participant-reference entity level. Specifically, we use confidential positions-level data from Depository Trust & Clearing Corporation (DTCC), and transactions-level data from the regulatory version of the Financial Industry Regulatory Authority’s Trade Reporting and Compliance Engine (TRACE). We then construct net flows of credit bought or sold by each participant in an individual reference entity taken through the CDS market and through the bond market, respectively. 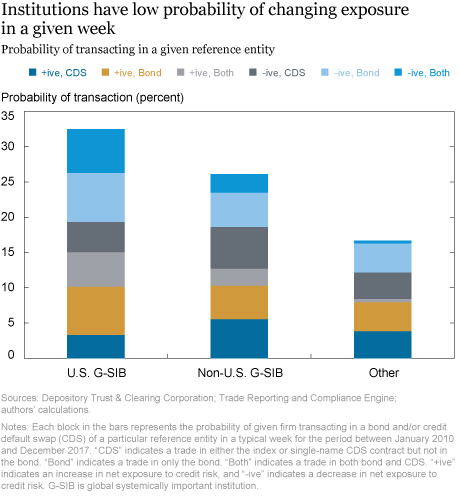 Aggregate Credit Exposure
Do strategy differences across institution types translate into overall credit risk exposure differences? The chart below shows that, in the aggregate, U.S. G-SIBs have historically had a different profile of overall exposure to corporate credit risk than other institutions. While non-U.S. G-SIBs and non-G-SIBs have net exposure close to zero for most of our sample, U.S. G-SIBs were, on average, net buyers of exposure prior to January 2014 but have increasingly been net sellers of credit risk exposure after January 2014. 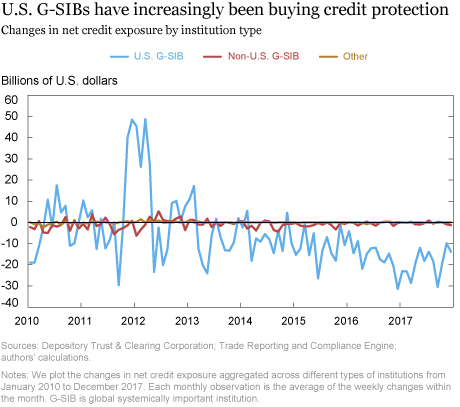 Anna M. Costello is an assistant professor at University of Michigan's Ross School of Business.

The introduction is misleading. AIG sold CDS on MBS. The article is about corporate CDS. This is like comparing European equity options to exotic options. Yes, they are both options but they have vastly different risk profiles. The rest of the article is interesting though.

As the Reuters article states later:
"Many CDSs were sold as insurance to cover those exotic financial instruments that created and spread the subprime housing crisis, details of which are covered here 1. As those mortgage-backed securities and collateralized debt obligations became nearly worthless, suddenly that seemingly low-risk event-an actual bond default-was happening daily. The banks and hedge funds selling CDSs were no longer taking in free cash; they were having to pay out big money."