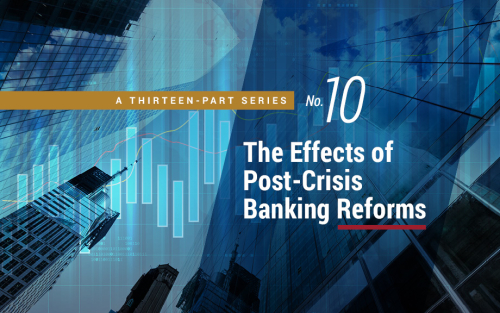 What is the Liquidity Coverage Ratio?
A lesson from the financial crisis is that banks need a liquidity cushion to cover unexpected cash outflows. The LCR requires bank holding companies (banks) with consolidated assets exceeding $50 billion to hold enough high quality liquid assets (HQLA) to meet their net cash outflow for thirty days during a period of stress.

The LCR also restricts the amount of liquid, “runnable” liabilities—such as overnight debt, trading liabilities, and transactions deposits—since these funding sources quickly disappear in a crisis. As of the end of the second quarter of 2018, U.S. global systemically important banks (G-SIBs) maintained an LCR at least 20 percent above the regulatory minimum of 100 percent (see chart below). 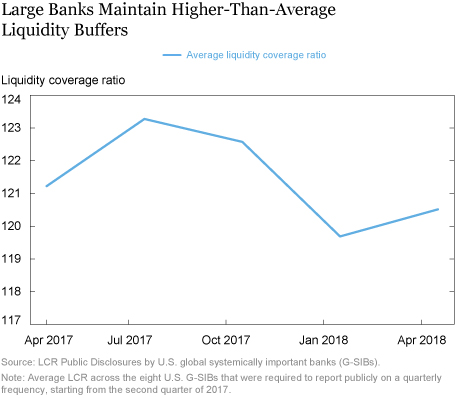 How is Liquidity Creation Measured?
Based on Bai et al (2017), the Liquidity Mismatch Index (LMI) assigns liquidity weights to each asset and liability item on bank balance sheets; assets and liabilities with greater liquidity are assigned higher weights. The LMI is then defined as liquidity-weighted liabilities minus liquidity-weighted assets. For example, suppose the bank takes in $20 of deposits and provides $100 of highly illiquid loans. If we assign a weight of 1 to deposits and 0.1 to the loans, then liquidity creation is (1*$20 – 0.1*$100), or $10. In practice, the LMI liquidity weights are derived from market prices.

Of note, our definition of LMI is the negative of that in prior work because it allows us to interpret a higher LMI as more liquidity creation.

Did Banks Subject to LCR Reduce Liquidity Creation?
In our sample, liquidity creation is negative, which means that bank liabilities are less liquid than bank assets, on average, based on market prices. However, our focus is on the change in liquidity creation from the LCR. To identify this change, we examine the change in liquidity creation before and since 2013, when the LCR rule was proposed. Further, we compare banks subject to LCR (LCR banks) with midsized banks that have assets less than $50 billion, but more than $3 billion, and therefore are not subject to LCR. Small banks with less than $3 billion in assets are omitted as they differ from larger banks in many ways.

To compare across banks of different sizes, liquidity creation is expressed as a percentage of the bank’s total assets. We find that LCR banks reduced liquidity creation (blue line), as compared to midsized banks (gold line) since 2013 (see chart below). 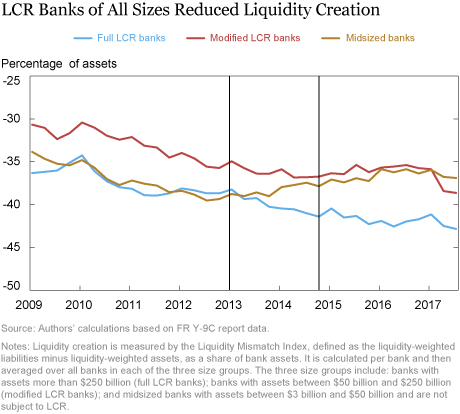 How Did Banks Reduce Liquidity Creation?
Since banks can reduce their liquidity creation in various ways, we examine book value changes of liquid and illiquid balance sheet items. On the asset side, LCR banks increased the share of HQLA in their balance sheets from the pre-LCR levels while midsized banks did the opposite, as we show in our recent paper. In addition, the total amount of loans provided by LCR banks (for example, real estate loans) since 2013 was lower compared to the pre-LCR period while midsized banks increased loan provision as a share of their assets (see chart below). 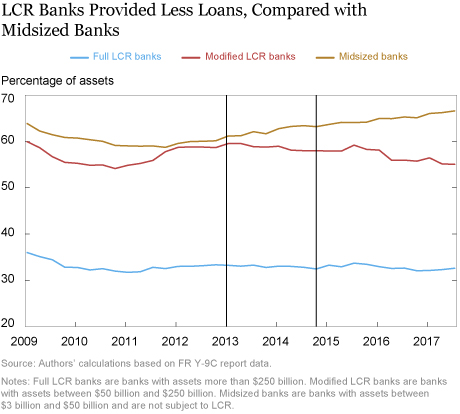 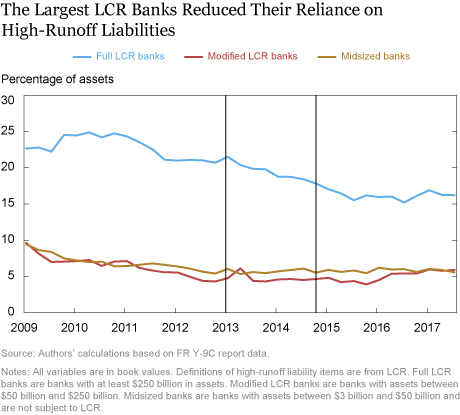 What Happens to Liquidity Creation When Banks Change LCR Status?
If a bank’s size changes over time, its LCR status might change as well. CIT Group was below the LCR size threshold until 2015, at which time CIT Group bought OneWest, pushing them above the LCR threshold (see chart below). Alongside, liquidity creation (shown in dollars, since only one bank is shown) dropped. Subsequently, in 2017, the size of the firm dropped below the LCR size threshold and liquidity creation increased. This case study supports our statistical evidence of the effects of LCR on bank liquidity creation. 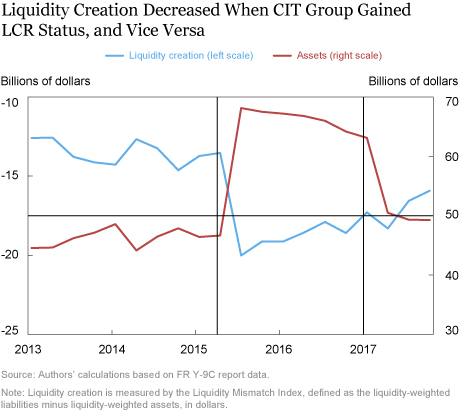 What are the Net Benefits of Liquidity Regulation?
Although banks not subject to LCR increased liquidity provision as a share of assets, this did not offset the decrease in liquidity creation by LCR banks in dollar terms due to the larger size of LCR banks. As we show in our paper, total liquidity creation in the banking sector in dollars decreased between 2013 and 2015 by 0.51 percent. Whether this reduction in liquidity creation is socially harmful is unclear given that researchers have argued that there was too much liquidity creation before the 2007-08 crisis. In addition, while we focus on the cost of liquidity regulation (that is, reduced liquidity creation) a complete evaluation of LCR should take into account the benefits of enhanced liquidity buffers in making the financial system safer and more stable (for example, by reducing the likelihood of fire sales in a crisis).


Daniel Roberts is a former senior research analyst in the Federal Reserve Bank of New York’s Research and Statistics Group.

A significant problem with the LCR is its static and excessively narrow definition of HQLA. Liquidity in the U.S. economy is broader and deeper than that. But with the definition too narrow, there is serious risk that when financial stress looms, HQLA will be hard to find, as regulated entities will not know how much the regulators will expect them to hold as market conditions deteriorate, investors will shift from floating NAV money market funds into fixed NAV funds (that hold HQLA securities), and swap collateral demand for HQLA securities will rise. A perceived shortage could make markets very nervous. The points raised in this important post show that even in good times, the excessively narrow definition of HQLA is affecting markets.