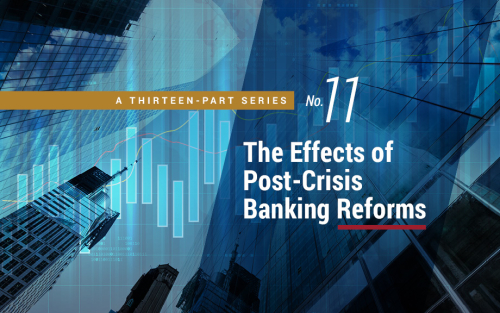 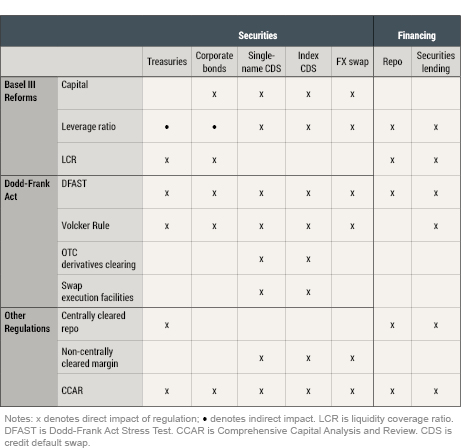 In the first paper (coauthored with Tobias Adrian), we focus on the relationship between bond-level liquidity and balance sheet constraints of regulated institutions. Using a detailed data set of U.S. corporate bond transactions we study whether bank holding company liquidity provision in the corporate bond market has changed since the financial crisis and to what extent these changes affect liquidity of individual bonds. Our Liberty Street Economics post from May 2017 summarizes the findings from that paper in greater detail.

The second staff report (joint with Anna Costello) studies the participation choices of bank holding companies in the market for U.S. corporate credit risk more broadly. Specifically, we consider banks’ choices of using either the corporate bond market or the credit default swap market (CDS) or a combination of both to change credit exposure to individual firms. As we discuss in the next post in this blog series, post-crisis regulatory reforms affect the overall risk-taking incentives of banks in the market for corporate credit risk, with banks shifting their strategies to more capital-efficient sources of credit exposure.

Finally, in the third staff report (written with Thomas Eisenbach, Pooja Gupta, and Peter Van Tassel), we argue that post-crisis changes to regulation and market structure not only have increased the costs for banks of participating in spread-narrowing trades across a broad array of markets, but also spill over to less regulated firms that rely on bank intermediation for their trading strategies. We review in detail the findings of that staff report in the last post in this series.

Across the markets we study in the three staff reports, we find suggestive evidence that the costs for G-SIBs to provide market and funding liquidity have increased since implementation of the regulatory changes began, which we date to January 2014. In the corporate bond market, G-SIBs have a lower ratio of customer trades to interdealer trades—suggesting that G-SIBs intermediate less—in the period starting in January 2014 compared with pre-crisis levels. More broadly, even though U.S. G-SIBs were net buyers of corporate credit risk across corporate bond and CDS markets prior to January 2014, they became net sellers of protection in January 2014, transferring U.S. corporate credit risk exposures to other types of financial institutions. Finally, the implied return on equity of basis spread trades across a number of markets is significantly lower under the post-crisis regulatory regime than under the pre-crisis one, making regulated firms less willing to enter into basis-narrowing trades.

These studies have two important caveats. First, because the incentives to provide market and funding liquidity are affected by many regulations that were introduced at similar points in time, as highlighted in the chart below, an event-study approach around specific implementation dates would confound the effect of multiple regulatory changes. Therefore, we split the sample into four sub-periods: pre-crisis, ending on December 31, 2006; crisis, lasting from January 1, 2007, until December 31, 2009; rule writing, lasting from January 1, 2010, to December 31, 2013; and rule implementation, starting on January 1, 2014. We then evaluate whether quantities and relationships of interest change across the sub-samples. We chose this approach since it allows us to generalize the results over a narrow identification—either a subset of securities (say, downgraded bonds), or a subset of days (say, when volatility is high).

A second caveat of our work is that we focus on how regulatory changes have affected market and funding liquidity provision during normal times. While we do find an effect of regulatory reform on bank OTC market participation decisions, this is only the first step in evaluating the welfare consequences of such changes. With higher capital and liquidity requirements, banks are better positioned to face stress events. Therefore, any losses in market and funding liquidity during normal times have to be weighed against the increased resiliency of both the regulated sector and the financial system as a whole during both normal and stressed times.

Regulation Rollback Effects?
In May 2018, the U.S. Congress passed revisions to the Dodd-Frank Act (DFA), exempting banks with less than $10 billion assets from the Volcker Rule, and increasing the asset threshold at which enhanced prudential standards apply from $50 billion to $250 billion. At the same time, federal bank regulators proposed a revision to the implementation of the Volcker Rule to reduce compliance obligations for small and mid-sized firms that do not have large trading operations. Such changes are unlikely to reverse the economics described in our three staff reports because our findings are driven by large institutions that operate in OTC markets and because Basel III regulations, those that already have been implemented and those that are still underway, also impact the profitability of liquidity provision of these large firms. In particular, the supplementary leverage ratio disincentivizes such firms from participating in low-margin activities, such as repo; the liquidity coverage ratio provides incentives to hold more liquid securities; the net stable funding ratio, by requiring sufficient stable funding to cover asset losses over a one-year horizon, encourages firms to reduce their use of short-term funding markets, further discouraging them from participating in repo transactions.