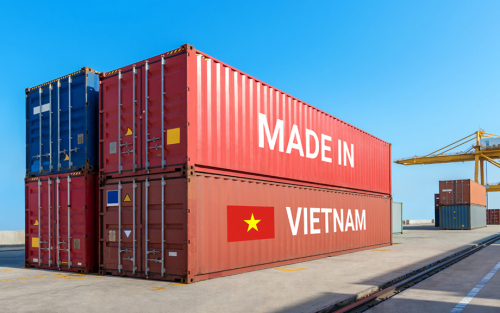 The United States has levied three tranches of tariffs on imports from China over the course of 2018 and 2019, which first came into effect in July, August, and September of last year (tariffs on the third tranche were increased this May). Collectively, in this note we will refer to these goods as being “on tariff lists,” while the remainder of China’s exports will be referred to as “not on tariff lists.” (It was recently announced that the United States will levy, as of the beginning of September, a 10 percent tariff on most of the goods that currently are not on the tariff lists.) China’s exports initially benefited from some front-loading of trade ahead of the tariffs’ effective dates. However, China’s exports to the United States began to drop off sharply as the tariffs came into effect. The chart below shows the notable dropoff in the value of imports of goods on the tariff lists from July onward. During the first five months of this year, imports from China of goods on the tariff lists were down by $31 billion compared with the same period in 2018, while total imports from China fell by somewhat less, $25 billion. 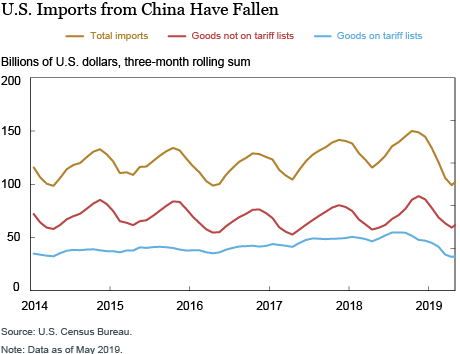 As imports from China declined, other countries have made up some of the difference. During the first five months of 2019, U.S. imports of goods on the tariff list from the rest of the world fell by almost $23 billion year over year—less than the equivalent decline from China—while all other goods imports increased by about $20 billion, so that total U.S. imports decreased only slightly. The chart below plots the change in total U.S. imports against the change with China and a selected set of major trading partners. The European Union (E.U.), Mexico, and Vietnam all stand out as having made significant gains in market share. Vietnam’s placement on this list may be somewhat surprising since the country is still quite a small trading partner with the United States. However, Vietnam’s exports to the United States have been growing rapidly for quite some time as its bilateral trade deficit with the United States has widened. 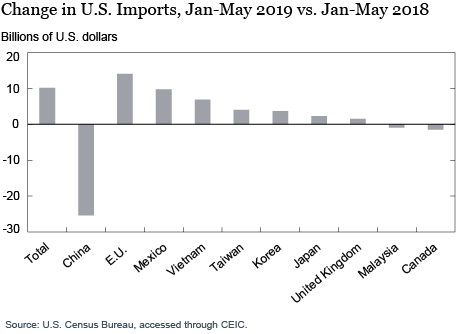 These trends have prompted considerable commentary on the prospect that Vietnam may replace China in global supply chains. Indeed, Vietnam has rapidly grown its export sector over the past decade, quickly becoming the second largest electronics exporter in Southeast Asia (behind Malaysia)—and is well positioned to take off further as a result of U.S.‑China tensions.

There are numerous factors that work to Vietnam’s advantage. With its long coastline, Vietnam has a number of sea ports across different provinces, most with direct access to the South China Sea and its key shipping lanes. Vietnam’s proximity to China, particularly the powerhouse Guangdong province, makes it easier for companies based in China (both multinational companies and domestic firms) to integrate Vietnam into their supply chains. The country has a large labor force, relatively low wages, and significant room for further urbanization to meet growing labor demand. Vietnam has invested heavily in infrastructure—almost the twice the global average as a percentage of GDP, according to the World Bank. Finally, Vietnam’s active participation in global trade agreements, including the Comprehensive and Progressive Agreement for Trans-Pacific Partnership and a recently-completed E.U.-Vietnam free trade deal, has fostered continued liberalization and business climate improvements.

Continued growth in FDI—with foreign-invested enterprises accounting for about 70 percent of Vietnam’s exports—is integral to Vietnam’s growing export market share. In the first six months of 2019, realized FDI in Vietnam was $9.1 billion, up 8 percent from the same period in 2018, and FDI approvals reached $18.5 billion—including an upsurge in announced investment from Chinese companies, potentially seeking to relocate production to avoid U.S. tariffs. Korea and Japan have been the leading sources of FDI historically, and Korean electronics companies are now significantly upgrading their production capacity in the country.

Signs that supply chains are shifting

As a first step, we analyze detailed data on the thousands of commodities on and off of the United States section 301 China tariff lists. We first calculate the change in share of U.S. imports for each commodity between the first five months of this year and the same period in 2018. We then calculate the difference between these changes with the change in China’s share, so that a positive reading indicates that a country or region has gained share against China.

The charts below plot the distributions of these differences for goods that are on and off the tariff lists. The fact that the distributions for the tariff list goods are shifted to the right (positive), is consistent with trade flows being shifted – for Vietnam as well as Mexico and the E.U. Moreover, in about two-thirds of the cases with market share gains, import growth for the non-China trading partner has been positive, so the gains are not just being driven by falling imports from China.

The same line of analysis for the same periods in 2018/2017—before the trade conflict—shows no such shift in distributions, suggesting that tariffs are indeed encouraging sourcing of imports from outside of China. In total, imports of goods on the tariff lists from these three trading partners increased by about $14 billion. 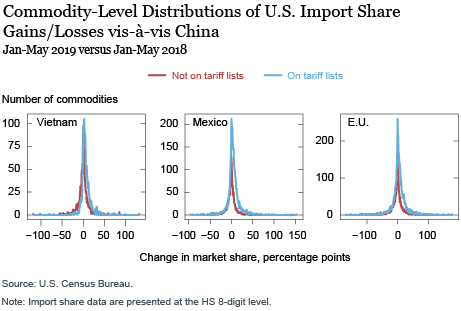 At the same time, however, it is important to keep the magnitudes of these trade flows in perspective. The top panels in the chart below plot the share of overall U.S. imports in 2018 for each of these countries or regions, broken out by total value, commodity composition, and by whether goods are on or off of the tariff lists. As illustrated in the top left panel below, China’s share of U.S. imports was over 20 percent last year, far greater than Vietnam’s, which was a bit less than 2 percent. Vietnam’s share is also dwarfed by those of both the E.U. and Mexico. 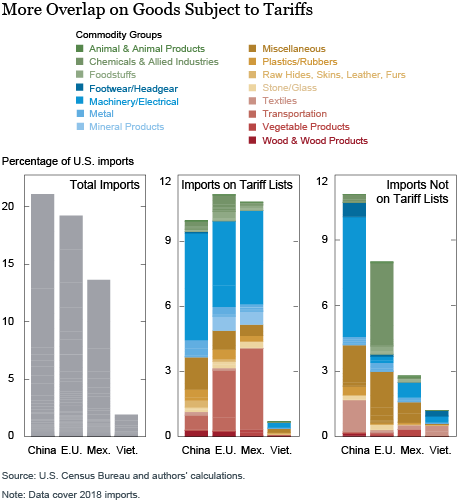 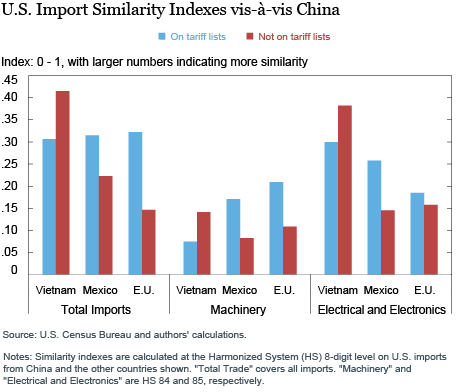 The picture is quite a bit different for goods that are not on the tariff lists, however, as there is less overlap, as illustrated in the top right panel. This suggests that it may be “easier” for companies to shift suppliers of commodities currently on the tariff list, as there are pre-existing industries and trading relationships, than it would be in a scenario where tariffs are expanded to cover all imports from China. This would be especially important for the “machinery and electrical” category, which comprises goods such as consumer electronics, computers, and mobile phones, which would be a large share of imports subject to an expansion of the tariff lists.

The bottom panel illustrates this point with “similarity indexes” of U.S. imports, where readings closer to 1 are “more similar” and vice versa. For the total and for both the “machinery” and “electronics” categories there is generally more similarity in import structures for the trade that is subject to tariffs (the blue bars are higher than the red bars). Interestingly, this is less true for Vietnam, which has somewhat greater similarity in trade structure for goods not on the tariff lists, both overall and in the electrical/machinery categories. This speaks favorably to Vietnam’s position to pick up market share—since it already appears to be competitive in industries that could be subject to an expansion of the tariff lists; however, the dollar values are quite small relative to China.

Within Asia, Vietnam appears to be picking up market share from China, but it remains too small to replace China in a significant way any time soon. Indeed, total U.S. imports from Vietnam amount to about $50 billion, equivalent to only one-fifth of the value of imports from China already on the tariff lists, and one-tenth of China’s total imports. Clearly, a shifting of suppliers from China to other countries will have to be broader than just Vietnam, with Malaysia and Thailand also potential beneficiaries. Still, the fact that Vietnam’s export gains to the United States are of similar magnitude to Mexico’s is quite impressive, since Vietnam’s GDP is only about $250 billion, one-fifth of Mexico’s $1.15 trillion. This means that the same dollar-value gain would represent a much larger proportional increase for Vietnam than for Mexico.

Sustaining this trend will pose challenges for Vietnam. Labor costs are likely to rise, and the country will face pressure to boost postsecondary training to increase the supply of high-skilled labor as it seeks to attract higher value-added manufacturing. In addition, for Vietnam to truly benefit from technology diffusion via FDI, further restructuring of state-owned enterprises will be important to allow more space for private companies to scale and link up to global value chains. Finally, as Vietnam’s prominence as an exporter grows, scrutiny on its currency practices will increase, to ensure that Vietnamese exporters are not gaining unfair competitive advantage.

Brendan Kelly is a senior associate in the International Affairs and Strategy section of the Bank’s Executive Office.