Does the BCG Vaccine Protect Against Coronavirus? Applying an Economist’s Toolkit to a Medical Question -Liberty Street Economics

Does the BCG Vaccine Protect Against Coronavirus? Applying an Economist’s Toolkit to a Medical Question

Editor’s note: A sentence in this post has been corrected to state that Heinsberg, Germany, borders the Netherlands (rather than France, as originally stated). (May 11, 2020, 12:30 p.m.) 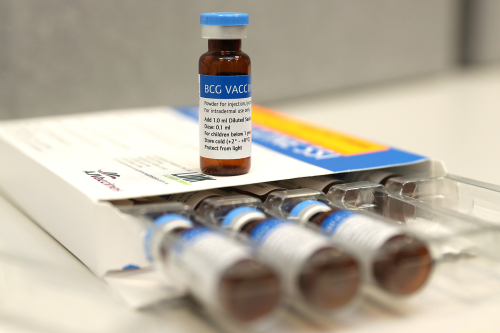 As COVID-19 has spread across the globe, there is an intense search for treatments and vaccines, with numerous trials running in multiple countries. Several observers and prominent news outlets have noticed that countries still administering an old vaccine against tuberculosis—the Bacillus Calmette-Guérin (BCG) vaccine—have had fewer coronavirus cases and fewer deaths per capita in the early stages of the outbreak. But is that correlation really strong evidence that the BCG vaccine provides some defense against COVID-19? In this post, we look at the incidence of coronavirus cases along the former border between East and West Germany, using econometric techniques to investigate whether historical differences in vaccination policies account for the lower level of infection in the former East.

The BCG vaccine has been used for nearly 100 years in the battle against tuberculosis. Today, the disease has been largely eradicated from the developed world and many rich countries have stopped mandatory vaccination. Spain, for example, ended mandatory BCG vaccination in 1985. The country experienced more than 563 coronavirus deaths per million population and is one of the hardest-hit countries in per capita terms. Its neighbor, Portugal, continues to perform mandatory BCG vaccination to this day and has experienced only 108 coronavirus deaths per million population (all numbers as of May 8). More generally, studies have documented that countries with mandatory BCG vaccination tend to have substantially fewer coronavirus cases and fewer deaths per capita than countries without mandatory vaccination, and that the intensity of the epidemic is lower for countries that began vaccinating earlier. Such cross-country correlations do not imply causation and skeptics have rushed to suggest that the passive immunization from the BCG vaccine would at best be short-lived. The WHO now cautions that there is currently no evidence that the vaccine protects against the novel coronavirus.

Clinical trials are now under way in Australia, the Netherlands, and the United States to test the effectiveness of the BCG vaccine against COVID-19 (in the short and long run). However, the results of these trials remain several months away. While the results of these clinical trials will be the last word on the matter, in the meantime, statistical tools used by economists can help evaluate the evidence that is already being publicly debated.

Economists, often unable to perform randomized experiments, have developed a suite of methods to exploit “natural experiments” that occur by chance as human action unfolds. In this post, we will use one of these tools—a geographic regression discontinuity analysis—to determine whether coronavirus prevalence changes markedly at the Cold War-era border between East and West Germany, countries with very different vaccination policies prior to their reunification in 1990: East Germany had mandatory BCG vaccination until reunification, while West Germany stopped voluntary but de facto universal vaccination in 1975. To be clear, we will not be able to test whether the BCG vaccine inadvertently trains the immune system against COVID-19 shortly after it is administered, but can assess hopes that this immunization might offer long-lasting protection against COVID-19.

Our setting presents a puzzle of its own. Many observers in Germany (for example, Die Zeit, a German weekly) have noticed that there is much lower coronavirus prevalence in the former East than in the West but found few convincing explanations. Moreover, low mortality in Germany as a whole has been the subject of much speculation. We provide formal evidence that there is indeed a sizable discontinuity in COVID-19 cases at the border, flexibly controlling for everything that is continuous at that border. Other important variables—like disposable income and average age—also jump at the border, but the most important potential confounders – population mortality rates from infectious diseases and mobility after the shutdown—jump the “wrong” way. They are much higher in the East than in the West and are, therefore, unlikely causes of this pattern. However, we also find that the difference in coronavirus prevalence is uniform across age groups, rather than dependent on whether people were born before or after the cessation of mandatory vaccination in each part of the country. This fact cannot be explained by some broader trained immunization via the BCG vaccine.

We start our analysis with a map of coronavirus cases in Germany by county as of April 26, as recorded by the Robert Koch Institute. The former border between East and West Germany is outlined in red. The darker the shading of a county, the more coronavirus cases per million inhabitants it has. Several counties with high concentrations stand out (such as Heinsberg, bordering the Netherlands, and much of Bavaria, both places where the epidemic was first recorded). It is also clear that there is a greater density of coronavirus cases around major cities (Berlin, Hamburg, and Stuttgart), just as in the United States. However, we immediately see that counties just to the west of the former border are a much darker shade of blue than counties just to its east. 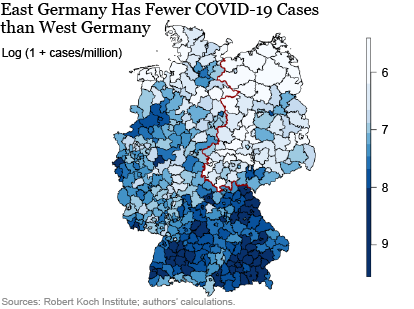 To formalize the intuition of this map, we use a regression discontinuity design, in which we nonparametrically estimate coronavirus prevalence as a function of the distance to the border and compare the estimates from the eastern and western sides of the border. We present a graphical representation of this exercise in the chart below, where the dependent variable is the logarithm of coronavirus cases per million inhabitants—a gauge of the exponential spread of the virus. We see that the jump at the border is about 0.7 log points, which implies that there are half as many cases per capita in a former East German county relative to a West German county just across the border. This halving of cases dominates the variation in coronavirus prevalence among counties in the East (where it is uniformly low) and is sizable relative to the average prevalence in the West. Faraway counties in Bavaria or near the border with France have the highest cases, but a smooth spread from there would imply a continuous decline, and can’t explain the precipitous drop at the border. 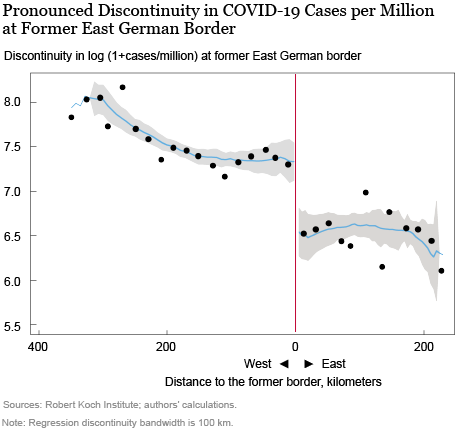 Nevertheless, our key piece of evidence makes the BCG hypothesis appear very unlikely. We exploit the fact that East Germany had mandatory vaccination from 1951 to 1990, while West Germany recommended vaccinating everyone from 1961 to 1975. If it’s really the vaccine that protects against the virus, then we would expect that discontinuities in detected cases among people aged 15-34 (most of whom did not get the vaccine anywhere) would only be coming from the protective effects of greater population vaccination in the East and not from being vaccinated themselves. On the other hand, discontinuities among people aged 35-59 (all of whom were vaccinated in the East, as opposed to only those above 45 in the west) should additionally include the direct effect of receiving the vaccine themselves, and therefore should be larger. The chart below shows that the discontinuities in coronavirus prevalence for both age groups are stark and roughly identical in size, contradicting what we would expect to see if the BCG hypothesis were true. 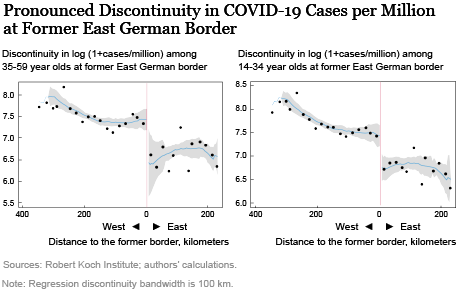 If the BCG vaccine does not seem to explain the East-West differential in coronavirus cases, then what does? A clue can be found in Germany’s commuting patterns. If those who live in the West work in the West and, in spite of a large wave of migration post-reunification, most former East Germans still work in the East, it may be the case that travel flows have not readjusted completely since reunification. In other words, Western counties along the former border may remain somewhat disconnected from their Eastern neighbors—more so than would be the case if there had never been a national border dividing them. As the epidemic started in the west, it may have had a harder time spreading eastward because relatively fewer people commute between East and West than commute across comparable distances within the West or within the East. The eastward spread of the virus was then further interrupted by the nation-wide lockdown instituted on March 22.

We simulate a canonical SIR model of the coronavirus epidemic in each German county, allowing infections to spread along commuting patterns starting from the distribution of coronavirus cases on February 29. We find that in the simulated data, the number of cases also discontinuously declines as one crosses from west to east over the former border, with the decline being somewhat smaller, but close in magnitude, to the decline observed in the actual data. Our methodology cannot exclude alternative explanations, and officially registered commuter flows likely do not represent person-to-person movement across Germany perfectly. However, our simulation constructs a situation that is consistent with the data on coronavirus prevalence and explains the drop in prevalence at the former East German border without reference to the BCG hypothesis.

While it is disappointing to find evidence against a partial remedy, this post shows the importance of carefully considering alternative explanations for correlations that may look convincing at first sight. As the world awaits the results of randomized clinical trials, a lively debate goes on using the nonexperimental data available. Our results, based on a modern discontinuity design and simulations of the outbreak, hopefully help to steer that debate away from drawing strong conclusions on the basis of cross-country data.


Richard Bluhm is an assistant professor of economics at Leibniz University Hanover and a Humboldt Lynen research fellow at the University of California San Diego.


How to cite this post:
Richard Bluhm and Maxim Pinkovskiy, “Does the BCG Vaccine Protect Against Coronavirus? Applying an Economist’s Toolkit to a Medical Question,” Federal Reserve Bank of New York Liberty Street Economics, May 11, 2020, https://libertystreeteconomics.newyorkfed.org/2020/05/does-the-bcg-vaccine-protect-against-coronavirus.html.

In fact, the number of cases per capita for 35-59 year olds is somewhat higher than that for 15-34 year olds on average and at the border.

Furthermore, out of the 400 German counties included in the analysis, in 301 counties the number of cases per capita for the older group exceeds that for the younger group.

While the COVID-19 epidemic in Germany indeed was concentrated among the young to a greater extent than in multiple other countries, Germany as a whole does not appear to be an exception to the medical community consensus that you cited.

It seems from comparing your discontinuity graphs that the rate of cases is higher for age 14-24 than for age 35-59 in many counties, in contrast to what the medical literature has been suggesting. Any explanation for that ?

We focused on the case of Germany because there are smaller differences across the border as both sides have the same central government. Looking at Spain vs. Portugal (or Northern Ireland vs. Ireland, where BCG-vaccinating Ireland has more cases per capita than its non-vaccinating neighbor) would introduce more confounding factors into the analysis.

I'm disappointed the evidence is so weak as I still have a BCG scar on my arm from receiving the vaccine as a teenager in the UK.

I would be much more interested in looking at the difference between Spain and Portugal. Did you look at that ?