« Market Function Purchases by the Federal Reserve | Main | How Does the Liquidity of New Treasury Securities Evolve? »

Money Market Rates in a Floor System
During the 2007-09 crisis the Fed sought to stabilize financial markets by greatly increasing the supply of reserves through lending facilities, subsequently, post-crisis, shifting to large-scale asset purchases to stimulate the economy. The Fed was able to maintain control of interest rates despite the large supply of reserves because Congress gave it the authority to pay interest on reserves (IOR) in October 2008. Ever since, the Federal Open Market Committee (FOMC) has influenced the level of the effective federal funds rate, which the Fed targets for monetary policy, primarily by adjusting the level of interest it pays on reserves.

Theory suggests that IOR should act as a floor for overnight rates, such as the fed funds rate. In practice, due to a variety of frictions, those rates can be below the level of IOR, as was the case between 2009 and 2018. Early research aimed at understanding this disconnect focused on the role of bank balance sheet costs and the supply of reserves (see, for example, this paper). Because reserves created by the Fed must be held by banks, an increase in reserves must, all else being equal, expand the aggregate balance sheet of the banking sector. Crucially, banks face costs that are proportional to the size of their balance sheet, such as a leverage ratio requirement and the Federal Deposit Insurance Corporation fee. If an increase in the supply of reserves raises those balance sheet costs, then we should expect bank deposit rates, and in turn other short-term money market rates, to decrease below IOR.

This theory—that short-term rates are guided by the rate of interest paid on reserves and that a larger supply of reserves depresses rates—was put to the test in 2018, when the Fed began reducing the supply of reserves. Consistent with the theory, short-term money market rates started to increase relative to IOR.

More recently, a puzzling inconsistency emerged. Earlier this year, as part of its policy actions to combat the economic and financial disruptions caused by the coronavirus pandemic, the Fed greatly enlarged its asset holdings and extensions of credit. Those actions more than doubled the supply of bank reserves, from approximately $1.5 trillion in March to more than $3 trillion in June. Yet, even with such a large increase in reserves, money market rates have proven surprisingly firm relative to the IOR rate. What explains this puzzling behavior?

Accounting for the Role of the Supply of Treasuries
In a Staff Report updated last year, we showed that the theory focusing solely on reserves and balance sheet costs isn’t sufficient to explain the behavior of short-term rates. In reality, it is also important to consider how the supply of Treasury securities affects rates. Specifically, our model showed that short-term Treasury securities and reserves have opposing effects on short-term rates.

Putting aside model details, the intuition for this result is as follows: as would be expected, increases in reserves lower short-term rates through the mechanism described by the balance sheet cost theory. More reserves raise banks’ balance sheet costs, which leads to lower bank deposit rates. However, wholesale bank deposits are not the only investment option for institutions seeking to invest in short-term instruments. Money market mutual funds (MMFs) offer an investment alternative to bank deposits and hold a large amount of short-term Treasury securities as assets. When the supply of Treasury securities increases, everything else being equal, Treasury yields tend to increase to attract investors. MMF shares become more attractive than bank deposits and investors reduce the amount of such deposits they hold. (Greenwood, Hanson, and Stein provide evidence of the substitutability of short-term Treasury securities and bank deposits in this paper.) This reduces the size of banks’ balance sheets (banks may reduce, on the asset side, their investments in repos, for example), and induces banks to raise their wholesale deposit rate to remain competitive.

To test our theory, we present empirical analysis focused on the fed funds rate. This particular money market rate provides a good representation of the overnight interbank interest rate as well as the rates earned by wholesale depositors in large U.S. banks and their overseas affiliates. Our regression aims to explain the spread between the fed funds rate, as our dependent variable, and the IOR rate. The key explanatory variables are the changes in the outstanding amount of Treasury securities with less than a year to maturity, which we dub as “short-term Treasuries,” and the changes in the outstanding amounts of bank reserves issued by the Fed. We posit that changes in short-term Treasuries tend to have a positive effect on the interest rate spread, and changes in reserves a negative effect. The empirical specification is discussed in detail in Section 5 of this Staff Report. For this post, we extend the time period over which we conduct the estimation through June 2020. 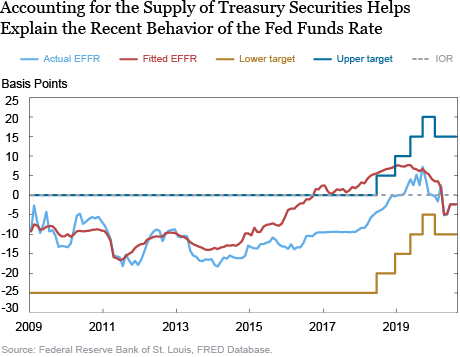 The model is particularly useful in explaining money market rates over the last year. While the reserve supply has increased since September 2019, dramatically so since March, rates have remained firm throughout the period. However, as shown in the next chart, the amount of Treasury securities with less than a year to maturity was rising as well, partially offsetting the depressing effect of higher reserves on interest rates. This highlights the importance of the simultaneous issuance by the U.S. Treasury of trillions of dollars of Treasury securities, many of them Treasury bills. 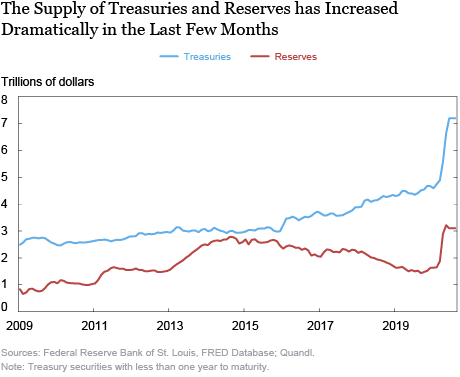 To Sum Up
In this post, we showed that the quantity of short-term Treasuries, in conjunction with the quantity of reserves, assists in explaining the evolution of short-term rates such as the fed funds rate. In particular, by enriching our understanding of how short-term rates are determined, we are able to explain why these rates have remained elevated in recent months, despite the Fed’s very large increase in the supply of reserves. Put another way, whether reserves are scarce can only be judged in relation to the amount of short-term Treasuries. Because Treasury issuance of short-term securities is expected to remain high, upward pressures on the federal funds rate are likely to continue in the coming months, even in the face of a large supply of reserves.

James J. McAndrews is the CEO and Chairman of the Board of TNB USA Inc, a senior affiliate at Coherent Economics, and a senior fellow at the Wharton Financial Institutions Center.

Ali Palida is a postdoctoral researcher at MIT Sloan School of Management.

David Skeie is a professor of finance at Warwick Business School.

Posted by Blog Author at 07:00:00 AM in Fed Funds, Federal Reserve, Liquidity, Treasury