CoVaR: A Measure of Systemic Risk

Wonk alert: technical content
During the 2007-09 financial crisis, we saw that losses spread rapidly across institutions, threatening the entire financial system. Distress spread from structured investment vehicles to traditional deposit-taking banks and on to investment banks, and the failures of individual institutions had outsized impacts on the financial system. These spillovers were realizations of systemic risk—the risk that the distress of an individual institution, or a group of institutions, will induce financial instability on a broader scale, distorting the supply of credit to the real economy. In this post, we draw on our working paper “CoVaR”—issued in the New York Fed’s Staff Reports series—to do two things: first, propose a new measure of systemic risk and, second, outline a method that can help bring about the early detection of systemic risk buildup.

The extensive use of off-balance-sheet positions and complex derivatives is often blamed for giving rise to the 2007-09 financial crisis, but these instruments could only induce a far-reaching financial crisis because they created the potential for large spillover effects. This has been a recurring theme: The 1987 equity market crash started with portfolio hedging of pension funds and led to substantial losses at investment banks, and the 1998 crisis began with hedge funds and spilled over to the trading floors of commercial and investment banks. In each case, the presence of systemic risk allowed shocks that were initially local to spread rapidly and potentially disrupt the broader economy.

History has shown that systemic risk can take many forms, and there is no guarantee that it will be possible to predict the next financial innovation or channel through which systemic risk will arise. The question is then how to measure the systemic risk buildup without knowing exactly how it will emerge in the next potential crisis. Studying the comovement of financial institutions’ assets provides insight into this question. While comovement is driven by economic fundamentals in normal times, periods of systemic crisis are characterized by increases in comovement.

Negative spillover effects can be direct, because of contractual links and heightened counterparty credit risk, or indirect, through price effects via liquidity spirals. Measures of systemic risk that capture the increase in tail comovement during financial crises are potentially useful additions to the supervisory toolkit. In addition, the recent regulatory reform efforts put into effect by the Dodd-Frank Act and the Basel Committee on Banking Supervision have placed increased emphasis on macroprudential policy, which focuses on the interconnection between individual financial institutions and the system as a whole. This macroprudential regulation complements traditional microprudential regulation, which is based on the risk of institutions in isolation.

Both microprudential and macroprudential regulation rely on measures of risk. The most common measure of risk used in microprudential regulation and in financial institutions’ risk management is the value at risk (VaR). The q%-VaR is the maximum dollar loss that occurs at most q% of the time. However, a single institution’s risk measure does not necessarily reflect the potential for that institution to contribute to systemic risk. A systemic risk measure should complement microprudential risk assessments in two ways. First, a systemic risk measure should identify the risk to the system posed by “individually systemic” institutions, which are so interconnected and large that they can cause negative risk spillovers to others, as well as by institutions that are “systemic as part of a herd.” A group of 100 institutions that act identically can be as destabilizing and dangerous to the system as one large, merged entity. For example, during the savings and loan (S&L) crisis of the late 1980s, no single S&L was systemic on its own, but as a group, these institutions were highly systemic. Second, systemic risk measures should recognize that risk typically builds up in the background in the form of imbalances and bubbles and only materializes fully during a crisis. Hence, high-frequency risk measures that rely primarily on contemporaneous price movements are misleading and procyclical—that is, they move together with risk, but do not forecast it. Regulation based on such contemporaneous measures tends to be procyclical and could amplify business/credit cycles because constraints bind most heavily in a crisis, but are not engaged when risk builds up in credit booms.

The alternative to VaR that we propose, CoVaR, emphasizes systemic risk. A firm’s CoVaR is the VaR of the financial system conditional on that firm being in distress. In the rest of our analysis, we focus on ΔCoVaR—the increase in the financial system VaR resulting from a particular institution becoming distressed—which captures the marginal contribution of a particular institution (in a noncausal sense) to overall systemic risk.

One could argue that regulating institutions’ VaR might be sufficient as long as each institution’s ΔCoVaR goes hand in hand with its VaR. However, this is not the case, as (1) it is not desirable that institution A should increase its contribution to systemic risk by following a strategy similar to institution B’s, and (2) empirically, there is no one-to-one connection between an institution’s ΔCoVaR and its VaR, as the chart below shows. In the chart, VaR is the maximum weekly loss for a firm, while ΔCoVaR is the maximum contribution of the firm to system weekly losses. Both measures of loss are estimated to be the maximal losses occurring no more than 1 percent of the time. The numbers for each firm are based on information as of the end of 2006, before the recent financial crisis. The scatter plot shows the weak link between institutions’ risk in isolation, measured by VaRi (x-axis), and institutions’ contribution to system risk, measured by ΔCoVaRi (y-axis). 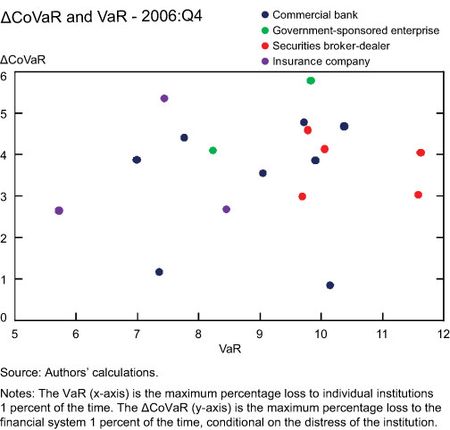 Empirical risk measures suffer from the fact that “tail observations” are—by definition—rare. After a string of favorable developments, risk seems tamed, but when a new tail event occurs, the estimated risk measure may increase sharply. Hence, regulatory requirements that are based on contemporaneous estimated risk measures would be stringent during a crisis and lax during a boom. Such an outcome introduces procyclicality. We propose an implementation of ΔCoVaR that circumvents this procyclicality. We call this measure a “forward ΔCoVaR,” which, per construction, is a countercyclical risk measure.

We construct forward ΔCoVaRs by estimating time-varying measures of ΔCoVaR for all publicly traded commercial banks, broker-dealers, insurance companies, and real estate companies. We then relate the time-varying estimates of the systemic risk contribution ΔCoVaR to observable characteristics of institutions such as maturity mismatch, leverage, market-to-book value, size, and market beta. The chart below shows the part of ΔCoVaR that is predictable from institutional characteristics, which is what we call “forward ΔCoVaR.” We can see that this forward ΔCoVaR exhibits markedly countercyclical properties. In particular, the forward ΔCoVaRs are strongly negatively correlated with the contemporaneous ΔCoVaRs. These forward ΔCoVaRs can thus be used as a basis for preemptive, countercyclical macroprudential policy. 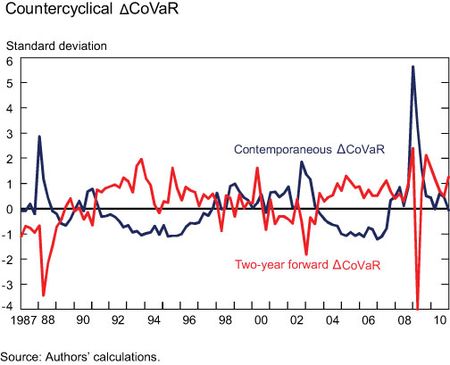