« What Is Driving the Recent Rise in Consumer Inflation Expectations? | Main | How Much Will the Second Round of Large-Scale Asset Purchases Affect Inflation and Unemployment? »

After bottoming out in late 2009, New York City’s economy has been on the road to recovery. In this post, we call attention to an unprecedented feature of the current economic recovery: overall employment in the city began to rebound from the recession well before Wall Street started adding jobs. We also consider some questions that this development naturally raises: What took Wall Street employment so long to recover? What’s been driving job generation on Main Street? What does the recent pickup in Wall Street employment suggest about the outlook for the city’s economy?

Why do we say that New York City is recovering? According to the Index of Coincident Economic Indicators (CEI) for New York City, a measure computed here at the New York Fed, economic activity in the city has increased each month since October 2009 and, as of our latest reading in March 2011, is up roughly 4 percent. Both employment and unemployment, key components of the CEI, improved significantly during 2010 and early 2011. Private sector payrolls have risen by more than 90,000 to date, recouping more than half of the jobs lost since their mid-2008 peak, and the city’s unemployment rate has retreated by more than a full percentage point.

What drives the New York City economy? Although New York City has a highly diversified economy, the financial activities sector clearly surpasses all other sectors in importance. In 2007, financial activities accounted for about 12 percent of citywide employment and roughly 35 percent of wage and salary earnings (see our article “Employment in the New York-New Jersey Region: 2008 Review and Outlook,” coauthored with Rae Rosen). Within the financial sector, the securities industry—colloquially referred to as “Wall Street”—is the driving force. It accounts for about 5 percent of employment but almost 25 percent of total wage and salary earnings, shares that are ten times as high locally as nationally, and each job in the securities industry is estimated to support two additional jobs in other sectors in the city. These “multiplier effects” occur in the industries that provide services to Wall Street (for example, legal, accounting, and computer services) and those that benefit from spending by Wall Street workers (for example, restaurants, theaters, real estate, and private schools).

Given the securities industry’s dominance in the city’s economy, it is not surprising that cycles in Wall Street employment have tended to lead cycles in total city employment, as shown in the chart below. 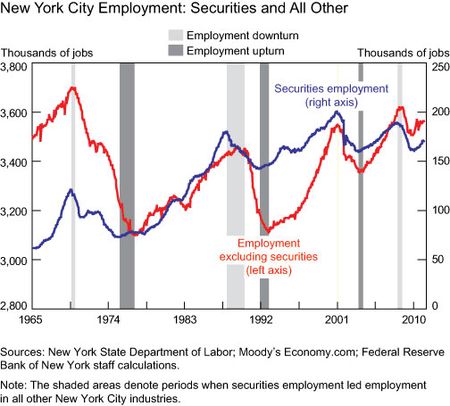 Until 2010, there had not been an occasion in the past fifty years when employment outside Wall Street had turned up or down before Wall Street employment. Upturns in overall employment in the city have been preceded by upturns in local securities industry employment (the dark-grey-shaded periods in the chart above). The same is true of downturns (light-grey-shaded periods). In the city’s severe 1989-93 economic downturn, for example, securities industry employment began to decline in January 1988—fully fifteen months before employment in all other sectors fell (see “Can New York City Bank on Wall Street?”). Subsequently, securities employment began to recover in February 1992—ten months ahead of other sectors. 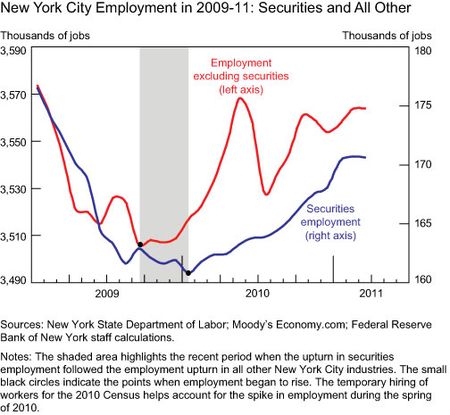 Why the lag? Since problems in the financial sector were at the core of the recent downturn, the delayed rebound of employment in New York City’s securities industry may not be surprising. Indeed, as the crisis unfolded in 2007 and into 2008, some analysts forecasted huge job losses in the city’s financial sector and conjectured that the city would lose whole segments of the industry to London and other foreign financial centers. Although these worst-case scenarios have not played out, job levels on Wall Street remain well below their pre-recession highs. Factors such as the restructuring of the securities industry and ongoing uncertainty about the industry’s future and the regulatory environment have very likely contributed to the delay in employment growth.

During the early stages of New York City’s recovery, while Wall Street was still shedding jobs, the city’s job gains came from Main Street—a diversified set of industries not directly linked to financial activities, such as retail trade, leisure and hospitality, motion pictures and recording, professional and business services, and education and health services. A number of factors may account for the increased employment in these local sectors, including the national recovery, domestic and foreign tourism, and long-term increases in demand for education and health services. Some of these gains, however, could also be coming indirectly from Wall Street, reflecting greater outsourcing of activities, a growing use of temporary workers, more demand for legal and consulting services, and a shift of activities away from securities firms to banks and other financial institutions.

This unusual pattern has a wide range of possible implications going forward. It is quite possible that other growth sectors will play a larger role than in the past in New York City’s expansion and, in so doing, lead to a somewhat more diversified economic base. It is also possible that the recovery will be less robust without the normal sustained boost provided by Wall Street. Of course, in another scenario, the rebound in securities industry employment since the second half of 2010 would continue through 2011 and beyond, augmenting the recovery that appears to have taken hold already in a fairly broad set of sectors. If Wall Street continues hiring in large numbers, the outlook for the city’s economy will certainly brighten further. We invite our readers to offer their perspectives on these possibilities.