Will the Federal Reserve’s Asset Purchases Lead to Higher Inflation?

A common refrain among critics of the Federal Reserve’s large-scale asset purchases (“LSAPs”) of Treasury securities is that the Fed is simply printing money to purchase the assets, and that this money growth will lead to much higher inflation. Are those charges accurate? In this post, I explain that the Fed’s asset purchases do not necessarily lead to higher money growth, and that the Fed’s ability (since 2008) to pay interest on banks’ reserves provides a critical new tool to constrain future money growth. With this innovation, an increase in bank reserves no longer mechanically triggers a series of responses that could lead to excessive money growth and higher inflation.

There are three parts to the argument that Fed asset purchases will lead to much higher inflation. First, there is the connection between Fed asset purchases and reserves. When the Fed buys assets from the public, it pays for them by electronically crediting banks’ accounts at the Fed with reserves. Second, there is a connection between reserves and money growth. When banks’ reserve balances increase, they can use these additional reserves to make more loans to households and businesses—an outcome that can lead to further growth in the broad money supply in the economy. Third, there is a connection between higher credit and money growth and inflation. For example, excessive credit expansion can bring on higher money growth, excess demand pressures, and overheating in the economy, which in turn can raise inflation expectations and increase the inflation rate.

My view is that this description of the pipeline between Fed asset purchases and inflation is accurate except for the connection between reserves and money growth. I’ll show that asset purchases to date have not led to unusually rapid growth in the money supply, and I’ll also explain why a large amount of reserves need not induce rapid growth in money over time.


A Useful Review: Money and Reserves

Money is usually defined as a generally accepted medium of exchange, used to purchase a good or service or to retire a debt. Money takes many forms in modern society, such as cash, deposit accounts at banks, shares in money market mutual funds, and savings account balances and other liabilities issued by banks, credit unions, and thrifts. The Federal Reserve tracks two measures of money—the monetary aggregates M1 and M2. Currency and demand deposits at banks are the largest individual components of both M1 and M2, but M2—the broader measure—also includes savings deposits, small time deposits, and retail money funds (for fuller definitions, see Federal Reserve Statistical Release H.6).

Reserves are balances that commercial banks hold in accounts at Federal Reserve Banks. When the Fed purchases assets from the public, it pays for them by electronically crediting funds to banks’ reserve balances at the Fed.  Reserves are part of the monetary base, another monetary aggregate tracked by the Federal Reserve. The monetary base consists mainly of currency and reserves (for a fuller definition, see Federal Reserve Statistical Release H.3). In contrast to currency and demand deposits at banks, which can be held by anyone, accounts at Federal Reserve Banks can be held only by banks and a few other special institutions such as the government-sponsored enterprises Fannie Mae and Freddie Mac.

With these concepts understood, we can now address our main question: Will the Fed’s asset purchases lead to inflation?


How Do Fed Purchases Affect the Money Supply?

My counterargument to those who contend that Fed asset purchases will generate higher inflation will focus on the second section of the pipeline—the possible link between reserves and growth in money. When the Fed purchases a security from the public, it first credits the seller’s bank with reserves. In turn, the bank credits the seller’s checking account with a deposit. As long as the seller does not withdraw the deposit, the money supply, measured by either M1 or M2, will have increased by the exact amount of the Fed’s purchase. It is important to note that in the example just given, the money supply increased because of the behavior of all parties: the Fed in creating reserves, the bank in creating deposits, and the depositor in maintaining the deposit.

In other circumstances, the increase in the money supply following a purchase by the Fed can be either less than or greater than the amount of the Fed’s asset purchase. If the depositors in the economy are deleveraging, that is, if they choose to repay debts (such as previous loans) after the bank credits their accounts with deposits, the increase in the money supply following a Fed purchase can be less than the amount of the Fed purchase. As a depositor repays a debt it owes to a bank, the bank’s loans and deposits decrease. If depositors are repaying loans at the same time that deposits are increasing as a result of asset purchases by the Fed, then the net effect could be a decrease in deposits, if the repayment of loans exceeds the asset purchases.

Alternatively, if bank customers demand new loans from banks, and banks use the reserves created by the Fed to extend loans to customers, then the money supply could grow by more than the amount of the Fed purchase.

What has, in fact, happened with the money supply since the beginning of the LSAP programs in late 2008? As measured by the growth in M1, money growth has been less than the amount of the Fed’s purchases (see chart)—a development that is consistent with the deleveraging, or net repayment of loans, by bank customers that has occurred since late 2008. The Federal Reserve Bank of New York’s Quarterly Report on Household Debt and Credit for the first quarter of 2011 indicated that “as of March 31, 2011, total consumer indebtedness was $11.5 trillion, a reduction of $1.03 trillion (8.2 percent) from its peak level at the close of 2008Q3.” So deleveraging by U.S. consumers has been substantial during the period of the LSAPs. 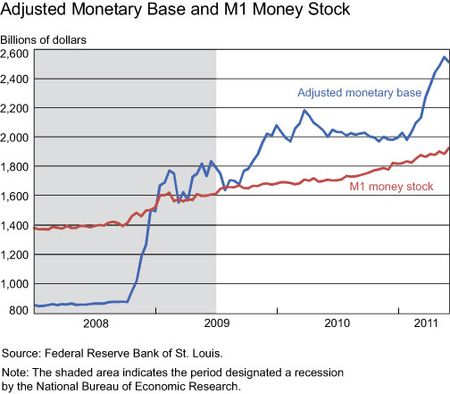 The New Pipeline View: Why a Surge in Money Growth Isn’t Inevitable

As of early 2011, there was little evidence of aggressive lending by banks, and the recent behavior of the broader money supply, economic activity, and inflation suggests that money growth has not been excessive. Nevertheless, there are commentators who view the high level of reserves resulting from the Fed’s asset purchases as “inflation tinder.” Won’t those reserve balances inevitably lead to high money growth at some point, as banks seek to lend them out? Here I can clearly state that the answer is no.

The basis for my answer is that the introduction of interest on reserves has altered the linkage between reserves and money growth. Before banks were eligible to earn interest on their reserve balances, they had strong incentives to avoid holding “excess reserves”—reserves in excess of the amount they are required to hold by regulation. High levels of excess reserves in the old regime would be expected to generate a high growth rate of loans, and consequently high money growth whenever the banks’ risk-adjusted expected return on loans was positive.

In the new regime, the Fed can vary the rate of interest on reserves to directly affect banks’ incentives to lend out excess reserves. For example, a bank holding excess reserves will not have an economic incentive to lend out those reserves if the risk-adjusted expected return on the loan is below the rate the bank earns on its reserve balances. In terms of our analogy to a pipeline, the rate of interest paid on reserves now acts as a valve, reducing the pressure that Fed purchases might place on banks to increase lending and thereby spur money growth. When higher interest rates are paid on reserves, the reserves are put in a sort of reservoir, relieving a flow that could ultimately generate higher inflation.

In its December 14, 2010, statement, the Federal Open Market Committee (FOMC) indicated that it “will employ its policy tools as necessary to support the economic recovery and to help ensure that inflation, over time, is at levels consistent with its mandate.” The FOMC may choose future policies that result in faster or slower money growth, but the presence of large amounts of reserve balances on banks’ balance sheets by itself does not inevitably commit the FOMC to a high future money growth policy. Instead, if Fed policymakers believe that it is preferable to rein in bank lending and money growth, they can raise the rate of interest paid on reserves and thereby dampen banks’ incentives to lend out reserve balances.