The U.S. inflation outlook is the focus of considerable discussion in business and central banking circles. As shown in the chart below, headline inflation measured as a year-to-year percentage change declined over the first half of 2010, leveled off in the second half of the year, and has been rising recently—driven largely by higher commodity prices. An important question is whether this recent increase is likely to be transitory or the beginning of a more sustained rise in headline inflation. In this post, we examine data from the Federal Reserve Bank of Philadelphia’s Survey of Professional Forecasters (SPF) and discuss how the survey’s unique features and rich information on inflation expectations can shed light on this question as well as offer insight into the inflation outlook that is not available from other survey instruments. While inflation has indeed increased recently, our analysis suggests that inflation expectations are not presently at risk of becoming “unanchored,” or showing a greater concern over higher future inflation. 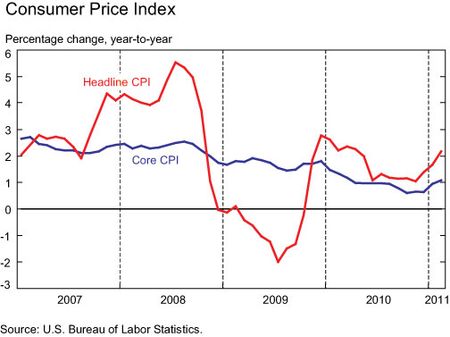 It is widely understood that high inflation is harmful because it reduces the real purchasing power of people’s income and can increase uncertainty. These impacts underlie part of the Federal Reserve System’s “dual mandate”—to keep prices stable and pursue maximum sustainable employment.

To monitor inflation developments, commentators and researchers often track popular surveys of inflation expectations, such as the University of Michigan expectations survey and the Blue Chip consensus forecasts. While these surveys provide measures of expected inflation at the individual or aggregate levels, they do so through a single reported point forecast and therefore offer a somewhat limited description of the inflation environment. In contrast, the quarterly SPF asks professional forecasters for point and density forecasts of inflation. The density forecasts take the form of a histogram in which respondents assign a probability to a number of preassigned intervals, or bins, into which inflation might fall. Using data on both types of forecasts, we can describe the inflation environment much more fully by measuring “tail risks.” As we discuss below, the additional information on tail risks can be especially useful for gauging the extent to which inflation expectations are well anchored.

Greater concerns about higher inflation could result in an immediate and notable shift in survey respondents’ point forecasts. However, it is more likely that any significant increase in their point forecasts would evolve over time and be preceded by a change in their risk assessment. That is, respondents would view lower inflation outcomes as less likely and higher inflation outcomes as more likely. This scenario is illustrated in the chart below, which shows how hypothetical density forecasts could change for a respondent who becomes more worried about higher future inflation. Compared with the respondent’s density forecast in the top panel, the respondent in the bottom panel now assigns greater probability to the higher inflation ranges. Although the point forecast will increase, the size of the increase may initially be muted. The key issue is that the change in probabilities assigned to the more extreme bins can provide important information about subsequent changes in inflation expectations. In effect, these changes in probabilities can act as a leading indicator of a possible unanchoring of inflation expectations. 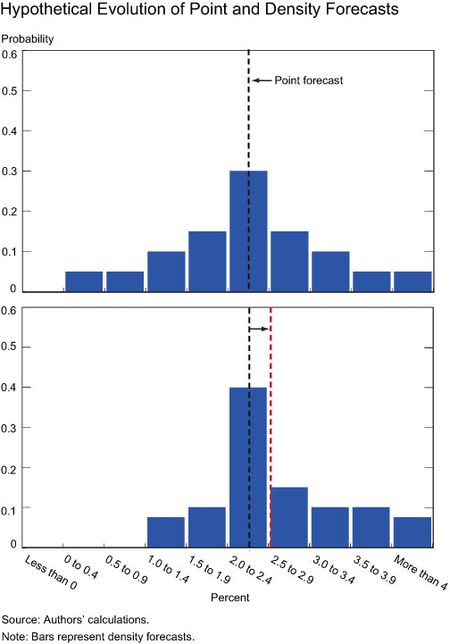 The density forecasts of each respondent can also be combined into an “aggregate” histogram by averaging the reported probabilities for each bin across all individuals. The next chart shows the aggregate histogram for 2009 (Q4/Q4) core consumer price index inflation (growth in core CPI from fourth-quarter 2008 to fourth-quarter 2009) from the second-quarter 2008 survey. The aggregate histogram shows the average probability that SPF respondents associated with inflation falling in any range of values. For example, adding up the three red bars gives the average probability from this survey that core CPI inflation was expected to be 3 percent or more over the forecast horizon. We can use these “tail probabilities” as a measure of “high inflation” risk. These tail probabilities can then be followed over time to assess the degree to which high inflation risk is changing. 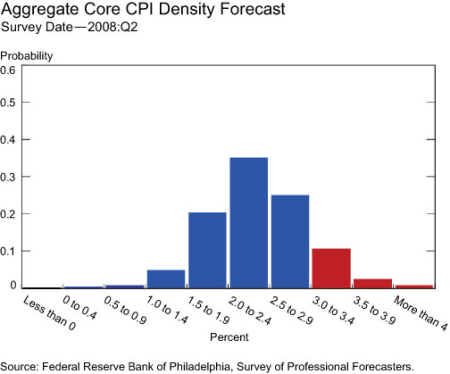 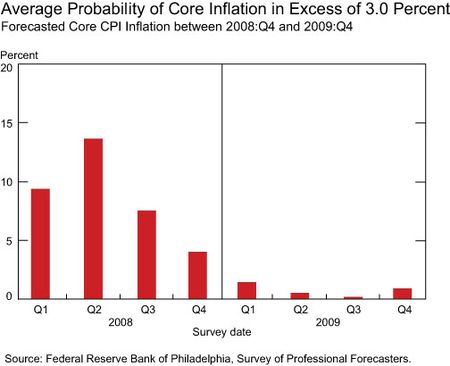 What does this measure of high inflation risk indicate about the current inflation outlook? The next chart provides the average tail probabilities for 2011 (Q4/Q4) core inflation in excess of 3 percent from the first-quarter 2010 to first-quarter 2011 surveys. Unlike in early 2008, these tail probabilities have remained quite low and declined through 2010 into 2011. Professional forecasters are not signaling the same degree of concern about high inflation that they were in early 2008. One important difference between the two periods is that the national unemployment rate is much higher today than it was in early 2008. In March 2008, the rate was 5.1 percent, while in March 2011 it was 8.8 percent. This large amount of economic slack is one restraint that will likely make it more difficult for commodity price pressures to lead to higher sustained inflation pressures. 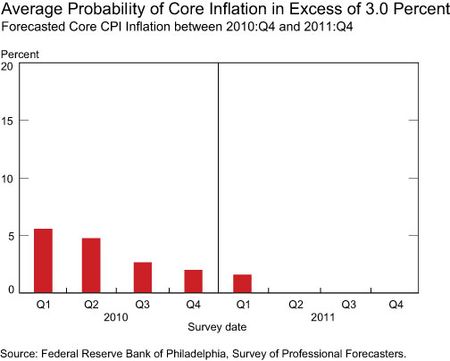 This comparison illustrates how the SPF density forecasts can be useful for tracking the risk of high inflation.  While this issue is always important for assessing the inflation outlook, our analysis suggests that the results obtained from the SPF inflation data offer particular value to policymakers evaluating the current economic environment.

*Joseph Song is an assistant economist in the Microeconomic Studies Function of the Federal Reserve Bank of New York’s Research and Statistics Group.