Global Banks and Their Internal Capital Markets during the Crisis

As financial markets have become increasingly globalized, banks have developed growing networks of branches and subsidiaries in foreign countries. This expansion of banking across borders is changing the way banks manage their balance sheets, and the ways home markets and foreign markets respond to disturbances to financial markets. Based on our recent research, this post shows how global banks used their foreign affiliates for accessing scarce dollars during the financial crisis—a liquidity strategy that helped transmit shocks internationally while reducing some of the consequences in the stressed locations.

There are important questions associated with the strategy applied to funding and liquidity decisions of global banks. One question concerns the role of “internal” capital markets, where funding shocks to one part of an organization can be accommodated with an internal transfer of funds from another part that was affected less by the underlying shock. If the head office of a U.S. global bank has funding needs, would we expect the bank to borrow internally from its overseas operations? Such a funding strategy opens up interesting issues regarding the way funding shocks may propagate across national borders.

Our research shows that global banks adopt a rather global approach to funding and liquidity management and that internal capital markets respond to exogenous market funding shocks. A liquidity shock no longer starts and ends on the balance sheet of a given bank; rather, it extends and links together balance sheets of the same organization across borders. So, to the extent that monetary policy attempts to affect the real economy by modifying the amount of lending done by banks domestically (the so-called lending channel of monetary policy), increasingly globalized banking implies more insulation from domestic funding shocks and, therefore, a diminishing impact for policy. This does not necessarily mean that the overall effect of policy is weakened: instead, the impact would increasingly be felt beyond domestic borders. Hence, banks managing liquidity globally may increase the international propagation of domestic liquidity disturbances.

The relevance of this mechanism is readily apparent in the financial crisis of 2007-09. The onset of the crisis in the summer of 2007 was characterized by a severe dollar funding shock to bank balance sheets. Foreign banks, particularly in Europe, had been accumulating substantial dollar-denominated assets, mainly long-term securities derived from real estate activity, and had funded such positions largely through short-term dollar liabilities. In order to provide much-needed dollar funding, in late December 2007 the Federal Reserve introduced the biweekly Term Auction Facility (TAF), to which both U.S.-chartered banks and U.S.-based offices of foreign banks had direct access. In addition, the Federal Reserve established dollar swap lines with the European Central Bank and the Swiss National Bank. Through these swap lines, the U.S. central bank provided limited quantities of dollars to European central banks, which in turn could lend the dollars to banks in their jurisdictions.

What were the consequences of the dollar funding shock for the pattern of funding support between banks located in the United States and their affiliates abroad? As the first chart shows, aggregate net internal borrowing by U.S.-chartered banks before the crisis was roughly $350 billion. Net internal borrowing from foreign affiliates started to rise right after BNP Paribas, a major French bank, announced on August 9, 2007, that it was unable to value assets in some of its investment funds. The pace of the increase in internal borrowing was fairly steady and reached a first peak of $500 billion in the third week of January 2008. By then, the TAF had conducted the first three auctions, allocating increasing but still limited amounts of dollars to eligible banks. As U.S. head offices tapped TAF, net borrowing from affiliates decreased in the subsequent weeks. After the near-bankruptcy of Bear Stearns in March, net borrowing from foreign offices picked up again throughout early summer, before dropping to $415 billion just around the time of the Lehman failure. The largest changes were observed after the Lehman event, with a new peak of $600 billion by January 2009. Only in March 2009 did balances return to the levels they had held before the Lehman failure. Internal borrowing decreased throughout the first part of 2010, when it reached levels similar to those recorded prior to August 2007. 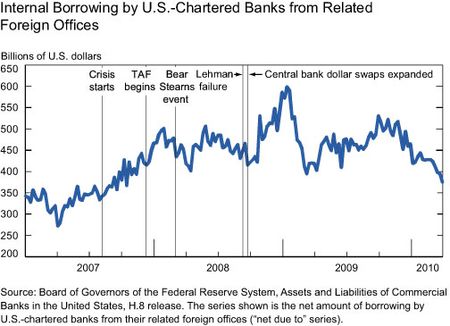 Next, consider the internal funding dynamics for the branches of foreign banks located in the United States. How did foreign head offices manage liquidity internally given the shortage of dollars outside the United States? With the introduction of the TAF, the U.S. offices of foreign banks gained direct access to inexpensive dollar funding, consistent with the observed spike in internal lending to their own organizations only in the weeks after the start of TAF auctions. These outward flows exhibited a substantial upward trend beginning immediately after the introduction of the TAF auctions and continuing through the first half of 2008. The trend stops right before the Lehman failure. As the second chart shows, in the period following the Lehman failure, internal transfers abroad dropped suddenly for these foreign entities. Foreign draws on the central bank dollar swap facilities rose from about $100 billion in September 2008 to about $600 billion throughout January 2009, leading to a significant drop in internal bank transfers. Once foreign banks gained access to significant dollar funding through the auction-based systems of their own central banks, the need for internal borrowing from their U.S.-based offices subsided. 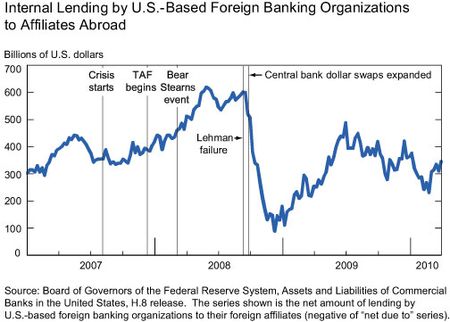