Would a Stronger Renminbi Narrow the U.S.-China Trade Imbalance?

The United States buys much more from China than it sells to China—an imbalance that accounts for almost half of our overall merchandise trade deficit. China's policy of keeping its exchange rate low is often cited as a key driver of that country's large overall trade surplus and of its bilateral surplus with the United States. The argument is that a stronger renminbi (the official currency of China) would help reduce that country’s trade imbalance with the United States by lowering the prices of U.S. goods relative to those made in China. In this post, we examine the thinking behind this view. We find that a stronger renminbi would have a relatively small near-term impact on the U.S. bilateral trade deficit with China and an even more modest impact on the overall U.S. deficit.

Our discussion focuses first on how the appreciation of the renminbi would affect U.S. imports of Chinese goods and then on how it would affect U.S. exports to China. The recent behavior of U.S. imports from and exports to China is shown in the chart below. To close the gap between them, a stronger renminbi would need to markedly raise U.S. exports and/or lower U.S. imports. Although we do not believe that this adjustment is likely in the near term, we close with some observations on why the bilateral balance can be expected to shrink over the long run—owing largely to forces other than the renminbi. 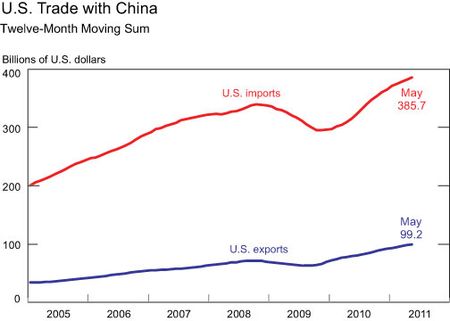 The structure of Chinese export production limits the impact of renminbi appreciation on U.S. spending for Chinese goods. A large proportion of China's exports consist of finished goods fashioned from imported parts and components, most often sourced from elsewhere in Asia. Recent estimates place the domestic content of China's exports at only about 50 percent.  For Chinese exporters, a stronger renminbi lowers the domestic currency cost of imported inputs, which are typically priced in dollars. As a result, the dollar price of Chinese goods can rise less than the move in the currency without reducing profit margins. For example, given a 10 percent appreciation of the renminbi against the dollar, an exporter that sources half of its inputs from outside China could maintain profit margins with only a 5 percent hike in dollar prices. (This simple example assumes that imported input prices are unchanged in dollar terms.) The increase in dollar prices from a stronger renminbi would be even smaller if Chinese exporters decided to accept lower profit margins in order to maintain market share.

Moreover, the impact of higher dollar prices for Chinese goods might well be to raise the U.S. import bill. In particular, U.S. spending on Chinese goods would rise unless higher prices induced a proportionately larger decline in import volumes. For example, if a 10 percent rise in the price of Chinese products resulted in only a 7 percent decline in the volume purchased, spending would rise by roughly 3 percent. Significantly, empirical studies have been as likely to find that higher prices raise U.S. import spending as lower it. Regardless of the direction of the spending impact, these offsetting price and volume effects imply that the impact of a Chinese currency appreciation on U.S. import spending would be small.

Finally, the impact of a stronger renminbi on U.S. imports would be limited by the fact that most goods purchased from China come from industries in which U.S. producers no longer have a substantial presence. Indeed, out of more than 400 detailed production categories, 60 categories account for some 80 percent of U.S. purchases from China. The same 60 categories account for less than 15 percent of U.S. manufacturing shipments. With little U.S. capacity at the ready, higher Chinese import prices might be more likely to spur increased imports from Korea or Vietnam than increased U.S. production. If so, a smaller U.S. trade deficit with China would be offset by larger deficits with other countries.

While a stronger renminbi is unlikely to reduce imports, it would provide a clear boost to U.S. export revenues—by making U.S. products cheaper in the Chinese market. For exports, the price and volume effects would not work at cross purposes. Studies have found that U.S. exporters leave dollar prices roughly unchanged when the value of the dollar drops against other currencies. An unchanged dollar price translates into a reduction in the price in foreign currency terms, boosting U.S. competitiveness, sales volume, and revenues.

Even so, the impact on the trade balance with China would be limited by the small scale of U.S. exports to China relative to imports—as we see in the chart above. In 2010, U.S. sales to China totaled roughly $90 billion, easily a new high. However, purchases from China came to roughly $360 billion, for a bilateral deficit of around $270 billion. Suppose that a 20 percent revaluation of the renminbi relative to the dollar were to give a 20 percent boost in U.S. sales to China—roughly the effect typically found in empirical studies. The result would be to increase sales to China by a little less than $20 billion, leaving the bilateral deficit at roughly $250 billion. Even an export response twice as large as that would leave the bilateral deficit at $230 billion. The impact of a stronger renminbi appears smaller still when set against last year's aggregate U.S. merchandise trade deficit of $650 billion.

Our bottom line is that a stronger Chinese currency would not make a meaningful near-term difference in the U.S. bilateral deficit with China.


The Bilateral Deficit over the Long Run

As we have seen, U.S. imports from China currently exceed U.S. sales to China by a factor of 4 to 1. The implication of this ratio is that exports to China need to grow four times faster than imports merely to prevent the bilateral trade gap from widening. Can the bilateral trade deficit ever shrink, given this daunting math?

Yes, we think that the gap will shrink—but primarily as a consequence of the high rate of economic growth in China. We have already seen U.S. exports to China grow at a 20 to 30 percent pace in recent years, driven by the rapid expansion of that country's middle class and the resulting increase in demand for higher-end goods and services. We expect a similar pace of export growth for some time. A stronger renminbi could play an important supporting role in this process, even if it would not be the main driver. At the same time, the current share of Chinese goods in overall U.S. non-oil import spending—about 25 percent—is already so high that Chinese producers will find it increasingly challenging to make further gains in market share. Within a few years, growth in U.S. purchases from China is likely to settle at the much lower rate of growth seen in overall U.S. import spending.

The answer has to do with the difference between renminbi and dollar revenues and between trade in volume and nominal terms. In particular, a stronger renminbi would put downward pressure on Chinese profit margins and on sales volumes while having a relatively modest impact on U.S. imports measured in dollar terms. Suppose the renminbi were revalued by 10 percent. If Chinese exporters kept dollar prices unchanged, they would suffer a 10 percent decline in revenues measured in renminbi even though there would be no change in dollar revenues. If Chinese exporters raise prices in dollar terms to protect profit margins, they would suffer an offsetting decline in sales volumes. These offsetting price and volume effects mean that the dollar value of sales to the United States would be only weakly affected despite the adverse consequences for Chinese sales volumes.

Okay, then this begs the obvious question: why has China invested so much effort in keeping the RMB from floating relative to the dollar? Recently, they've loosened the peg a little, but only a little. The Chinese must certainly believe it is to their advantage, even as it appears to be contributing to their internal inflation. So if letting the RMB float wouldn't really have that much affect on the trade balance, why don't they do it? Clearly they disagree with your assessment.