International Spillovers on Government Bond Yields: Are We All in the Same Boat? -Liberty Street Economics

« Historical Echoes: What’s Missing in This 1953 Portrait of the American Economy? | Main | What to Make of Market Measures of Inflation Expectations? »

International Spillovers on Government Bond Yields: Are We All in the Same Boat?

Should we expect the Federal Reserve’s large-scale asset purchases since late 2008 to have much impact on bond yields beyond U.S. borders? Prior studies (mostly of particular events, such as Neely [2010]) say yes. They find evidence of cross-country spillovers in the international bond market, but provide little insight into the strength, scope, and dynamics of these spillover effects. In this post, we quantify the international transmission of financial shocks between the U.S. government bond market and three other developed countries, thus providing a benchmark measure of the cross-country spillover effects in the international bond market. We find that an unexpected increase of 1 percent in long-term U.S. bond yields can lead to a 0.14 percent to 0.19 percent rise in the bond yields of other developed countries on impact, and that the cumulative spillover effect from U.S. to foreign bond markets ranges from 0.26 percent to 0.35 percent over a longer horizon.

Why might we expect a rise in U.S. bond yields to raise bond yields in other countries? First, openness of financial markets and arbitrage opportunities may mean that interest rate shocks are transmitted across economies. Second, a closer real integration of two economies may imply that a monetary policy shock or an inflationary shock in one economy may lead investors to expect similar developments in another, thus inducing a significant transmission of shocks in bond markets and money markets. Moreover, the dominant role of U.S. Treasury bonds may imply that spillovers from U.S. to foreign markets are larger than spillovers in the opposite direction. It is clear from the chart that long-term bond yields for the United States and the three economies are highly correlated on average. These correlations are verified in the next chart, which is computed using the daily return over ninety-one-day moving windows. In general, the correlations are positive; however, they are far from constant, suggesting that either the strength of spillovers varies over time or different types of shocks have stronger or weaker spillovers over time. 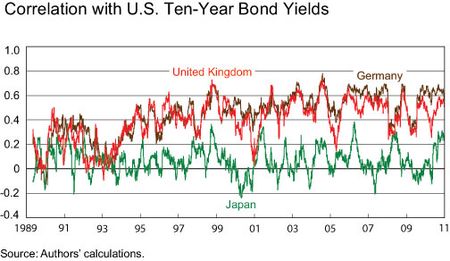 Over the sample period, the bond markets of all four countries experience volatility spikes, and we exploit such time-varying volatility of bond yields to identify the contemporaneous financial transmission channels. (For more information on the empirical methodology, see Rigobon [2003].) We now examine the effects of shocks over longer horizons. First, we describe how foreign bond market yields react over time to an exogenous one-standard-error increase in the U.S. bond yield, also known as a cumulative impulse response function. As shown in the chart below, the immediate overall spillover effect to the German bond yield is 0.17 percent given a 1 percent shock to the U.S. bond market, while the long-run spillover effect increases to 0.26 percent. For Japan and the United Kingdom, the immediate overall increase is 0.14 percent and 0.19 percent, respectively, and the long-run effect is 0.35 percent and 0.27 percent. 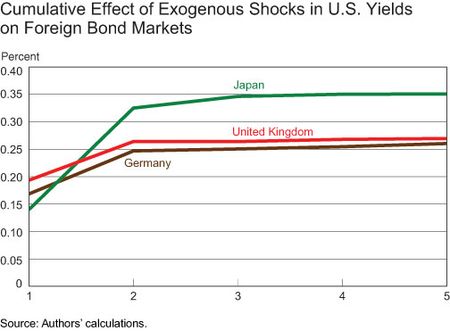 It is interesting to note that while the dynamics of the cumulative impulse responses are very persistent, which confirms the strong persistence of bond yields, the impulse analysis using the daily bond return shows that information is incorporated very quickly across financial markets. Another interesting result is that the international spillover effect across bond markets usually comes with a one-day lag, which suggests that it takes time for financial markets to digest information from other markets, and that the “search-for-yield” channel may be at work with some lag.

Lastly, how much do these linkages to the U.S. bond market drive changes in foreign bond yields? On average, not too much. Our results show that shocks from the U.S. bond market can explain 5.8 percent of the variance of German bond yields when forecasting one day ahead, whereas the variance rises to 6.4 percent when forecasting five days ahead. The corresponding variances of Japanese and U.K bond yields for a one-day-ahead forecast are 3.6 percent and 5.7 percent, respectively, and 9.2 percent and 6.4 percent for a five-day-ahead forecast.

In summary, we may not all be in the same boat, but we are surely linked to each other. Our analysis suggests a significant amount of international linkages in the government bond markets between the United States and other developed economies. In particular, the coefficient for the direct effect of shocks to U.S. bond yields on foreign bond markets ranges from 0.25 to 0.42, implying that on average more than 30 percent of the shock to the U.S. bond market is directly transmitted to the foreign bond markets. In the long run, the cumulative spillover effect from U.S. to foreign bond yields ranges from 26 percent to 35 percent, and shocks to the U.S. bond market can explain around 6 percent to 10 percent of the movements in foreign bond markets. These results provide a benchmark for further analysis of the cross-country impact of monetary policy and financial market movements, such as the second round of large-scale asset purchases.


*Vivian Z. Yue is an assistant professor of economics at New York University; Leslie S. Shen is an assistant economist in the Federal Reserve Bank of New York’s Research and Statistics Group.