Is There Stigma to Discount Window Borrowing?

The Federal Reserve employs the discount window (DW) to provide funding to fundamentally solvent but illiquid banks (see the March 30 post “Why Do Central Banks Have Discount Windows?”). Historically, however, there has been a low level of DW use by banks, even when they are faced with severe liquidity shortages, raising the possibility of a stigma attached to DW borrowing. If DW stigma exists, it is likely to inhibit the Fed’s ability to act as lender of last resort and prod banks to turn to more expensive sources of financing when they can least afford it. In this post, we provide evidence that during the recent financial crisis banks were willing to pay higher interest rates in order to avoid going to the DW, a pattern of behavior consistent with stigma.

With the onset of the recent financial crisis, the Fed enacted several measures to encourage DW borrowing. It reduced the DW penalty rate (the amount by which the DW borrowing rate exceeds the fed funds target rate) from 100 basis points to 50 basis points on August 17, 2007, and extended the term of DW financing from overnight to as long as thirty days. In addition, the Fed encouraged DW borrowing by issuing statements that it would view DW borrowing as a sign of strength for banks. However, DW borrowing remained sparse, and the average weekly DW primary credit outstanding was negligible in 2007 (see chart below). Perceptions of DW stigma resurfaced. 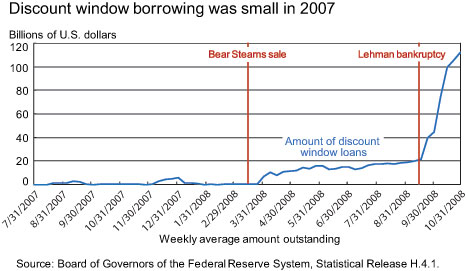 To complement the DW, the Fed introduced the Term Auction Facility (TAF) in December 2007 with the purpose of providing financially sound depository institutions with term funding at competitively set interest rates. One of the Fed’s primary objectives in designing the TAF was to eliminate any perception of stigma that may have been attached to borrowing from the DW, as described in our paper. Indeed, from the start of the TAF program, the amount of funds bid for and allocated at TAF was substantial (see chart below), indicating that little or no stigma was attached to TAF borrowing. 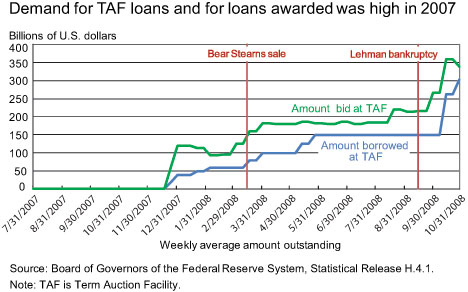 Since the TAF was introduced as a complement to the DW, the two facilities have shared a number of important features. For twenty-eight-day funds, both the DW and TAF facilities required the same collateral. In addition, during the period of our analysis, the same institutions—namely, those deemed in sound financial condition by their Federal Reserve District Reserve Bank—had access to both facilities. Thus, from the perspective of a bank, the two facilities were close substitutes. Where differences between the facilities existed (for example, DW loans could be prepaid but TAF loans could not), they tended to make DW borrowing more attractive to banks compared with TAF. Therefore, if the DW and TAF loan rates were equal, rational banks should not have preferred borrowing from the TAF, unless there was a stigma attached to DW borrowing. As explained in our paper, this implies that the rates bid by a rational bank at the TAF should not exceed the prevailing DW rate.

For the period December 17, 2007, to September 22, 2008, the chart below shows that a large percentage of banks participating in the TAF bid above the prevailing DW rate. (For the period after September 22, 2008, the DW and TAF facilities could no longer be considered close substitutes for participating banks, as further described in our paper.) On average, 56 percent of banks bid above the DW rate during this period. The red dots on the chart indicate TAF auctions where the stop-out rate (the rate actually paid by banks on TAF loans) exceeded the DW rate. So, for these auctions, banks received funds at a rate that was higher than the prevailing DW rate. Moreover, these high bids cannot be chalked up to occasional mistakes by a few banks, since half of all banks bid above the DW rate at a majority of the TAF auctions that they participated in. All in all, these results provide strong evidence of DW stigma by showing banks’ desire to avoid the DW even if it meant paying potentially higher interest rates for a TAF loan. 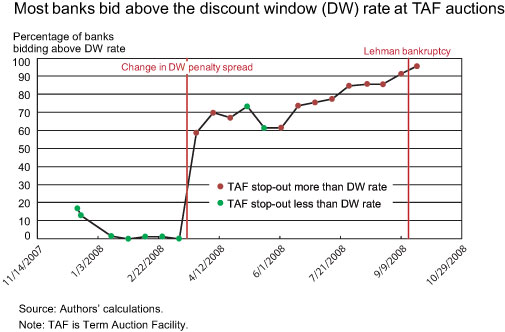 How much more were banks willing to pay to avoid borrowing at the DW? As explained in our paper, the minimum amount a bank was willing to pay is the difference between its TAF bid rate and the DW rate. (Banks may in fact have been willing to pay even more, but we have no way of observing this.) We find that, on average, banks were willing to pay at least $17.80 million more per auction to avoid the DW and up to $164.40 million more in the auction just after Lehman Brothers’ bankruptcy. It appears that, during the highly uncertain times following Lehman’s bankruptcy, banks were willing to go to great lengths to avoid the perception that they were financially weak.

How much more did banks actually pay? We consider those TAF auctions where the stop-out rate exceeded the DW rate. For banks that bid above the DW rate at these auctions and subsequently received funds at the stop-out rate, the additional cost was at least $6.70 million per auction, representing more than 9 percent of their interest payments on TAF loans (see chart below). These numbers rise to $74.70 million per auction and 40 percent of interest payments in the auction after the Lehman bankruptcy. In other words, banks could have substantially lowered their interest payments if, instead of borrowing from the TAF, they had borrowed from the DW. 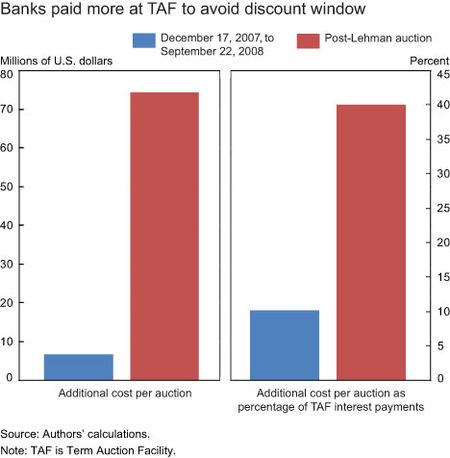 The existence of DW stigma impedes the Fed’s ability to supply funds to banks during times of crisis. If the Fed had a precise estimate of stigma, it could in theory adjust the DW rate to make it worthwhile for banks to borrow from the DW in spite of stigma. However, since we can never observe the maximum amount banks are willing to pay to avoid the DW, it is impossible to estimate the “stigma premium” precisely. This suggests that facilities designed to be “stigma-proof” would complement the DW during crisis periods.

The identities of DW borrowers were not disclosed by the Fed. Yet, DW stigma existed because of the fear that mark
et participants could somehow ferret out the identities of borrowers. Initiatives to increase transparency in Fed liquidity programs could increase stigma to the extent that they make it easier to identify DW borrowers on a timely basis. Recognizing the possible adverse consequences of real-time disclosure, the Dodd-Frank Wall Street Reform and Consumer Protection Act, passed in July 2010, requires the Fed to make public the identity of DW borrowers only after a lag of two years.