An Examination of U.S. Dollar Declines

Although the dollar strengthened somewhat recently, its level relative to the currencies of the United States’ main trading partners is nonetheless 11 percent lower than it was at the start of 2009. This represents one of the more pronounced periods of dollar weakness over the past two decades and consequently has garnered considerable attention from market participants and policymakers alike. In this post, we examine the role of market uncertainty and currency risk premia in the pace and size of episodes of dollar weakness since 1991. We find that the most recent bout of U.S. dollar declines largely can be attributed to the recovery in global economic activity from the most recent recession.

A look at broad-based U.S. dollar moves over the past twenty years reveals three periods of significant weakness: 2002-04, 2006-07, and the recent episode since 2009 (see chart below). 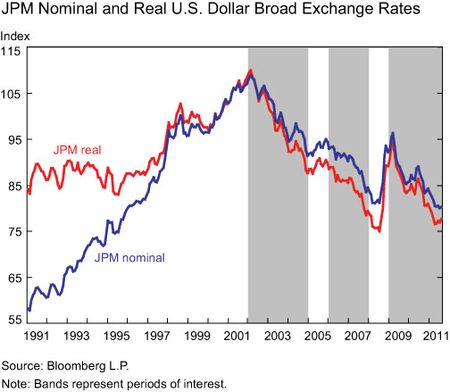 Market uncertainty is one factor that may have affected dollar moves during these periods. When currency traders become more uncertain about future currency moves, they reduce the size of their trading positions, which initiates or exacerbates a particular direction of change for a currency. Sharp movements in market uncertainty can be due to changes in risk aversion of investors as well as to changes in market liquidity. To proxy market uncertainty, we use in our examination the three-month-ahead U.S. dollar implied volatility (see chart below). 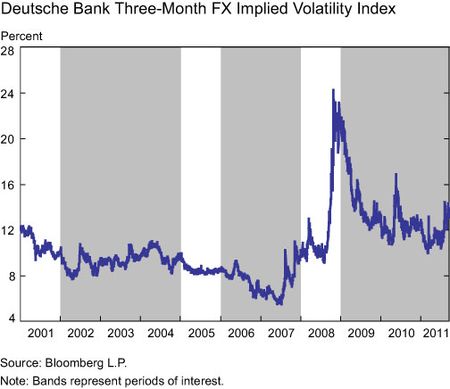 Given the role of risk aversion in driving market uncertainty, our analysis also looks at currency risk premia. U.S. investors enter currency markets to acquire foreign assets; consequently, they will hold a basket of foreign currencies over the holding period of the acquired assets. This will expose investors to currency fluctuations over this holding period, with changes in both the U.S. and foreign economic outlook being a major source of the fluctuations. U.S. investors therefore demand a risk premium, and this will be priced in the current exchange rate level. We look at the systematic U.S. dollar risk premium that results from the currency risk model outlined in the New York Fed staff report, “Financial Amplification of Foreign Exchange Risk Premia.” The risk premium measure represents the aggregation of investors’ expected dollar appreciation in excess of one-month forward rates across a multitude of U.S.-dollar-based currency pairs, and we link it to a few determining factors.

The chart below presents the U.S. dollar risk premium estimate since 2001 as well as the component of the premium associated with global economic activity. At times, there is a wedge between the overall risk premium and the global economic activity component, which represents the risk premium component associated with the funding conditions of U.S.-based financial institutions. This latter risk premium component measures the degree to which these institutions are able to expand their asset holdings (including foreign assets) beyond the level implied by their capital and deposit base by borrowing extra funds. 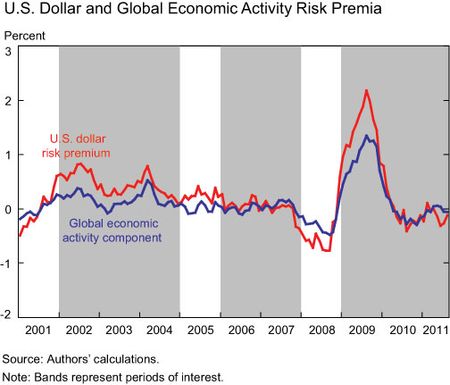 From the chart, it is clear that the U.S. dollar risk premium is more volatile than the component attributable to global economic activity alone. So, in times of favorable funding conditions, financial institutions could borrow funds to expand their overseas investments beyond the level commensurate with economic activity growth. Consequently, the overall risk premium would decline by more than what is implied by macroeconomic factors alone. The reverse might happen in the case of unfavorable funding conditions, resulting in an overall risk premium that increases more rapidly than its global economic activity component.

During the 2002-04 period, the trade-weighted U.S. dollar depreciated 16 percent as the U.S. economy emerged from a recession. This period was not accompanied by a notable increase in foreign exchange (FX) implied volatility, suggesting that investors did not rapidly liquidate dollar-denominated assets because of concerns about dollar weakness. Our currency risk model, on the other hand, suggests a decline in the overall U.S. dollar risk premium during 2002-04. At the start of the period, the measure suggested a risk of dollar appreciation of about 0.6 percent over a one-month horizon, as adverse global macroeconomic and U.S. financial conditions attributable to the recession made investors more risk averse. By year-end 2004, however, it had decreased to, essentially, a neutral level. This decline in the systematic risk premium seems to have been more strongly related to a prolonged easing in funding liquidity conditions over the period, as the global economic activity component suggested a broadly constant risk premium.

During 2006-07, the trade-weighted U.S. dollar depreciated 11 percent. Unlike in the previous period, there was a sharp rise in FX implied volatility from historically low levels in mid-2007, as housing and credit-related challenges weighed on asset market liquidity. The declining trend in the U.S. dollar over this period coincided with a downward tendency in the U.S. dollar risk premium measure, with the bulk of the risk premium moves occurring in 2007. Throughout 2006, our currency risk model shows a fairly stable degree of risk aversion that suggests a slight risk of dollar appreciation over a one-month horizon. From mid-2007, U.S. financial conditions deteriorated on the back of subprime problems in the U.S. financial sector. This resulted in an increased perception that the U.S. dollar was at risk of weakening: the model-implied premium declined while its macroeconomic component remained stable. Toward the end of the period, this increased risk of dollar declines was reinforced by a U.S. economy that slid into a recession.

In contrast with the events of 2007, the dollar weakness since 2009 has occurred against the backdrop of a significant decline in currency implied volatility. Accommodative monetary policies by a number of major central banks in response to the financial crisis appear to have dampened volatility across asset classes.

The currency risk model suggests that the dollar appreciation during the early part of 2009 corresponded with a sharp upward movement in the overall U.S. dollar risk premium. This move was initially driven by sharp declines in funding liquidity for U.S.-based investors after the Lehman Brothers collapse, as the wedge between the risk premium and global economic activity component widens. Once the Great Recession spread abroad, deteriorating global economic activity had an additional upward impact on the systematic dollar risk premium. All of this reflected growing aversion among investors to overseas investments,
and the resulting reversal of flows should have strengthened the U.S. dollar. However, the subsequent bounce-back in global activity and stabilization of the U.S. financial sector resulted in a pronounced fall in the U.S. dollar risk premium in late 2009 and beyond. The risk premium declines throughout 2010 and its stabilization more recently appears to be driven mostly by the global economic activity component. As such, it reflects the improved global economic climate for overseas investments by U.S. investors.

Looking back at the past twenty years, during the 2002-04 and 2006-07 periods of U.S. dollar weakness we observe a large role for market liquidity and funding conditions of investors in amplifying dollar moves. For the most recent period with such a dollar weakness trend, we observe this in 2009 but not beyond. Overall, the basic message is that the observed U.S. dollar declines of the past twenty months seem attributable more to the recovery of the global economy from the last recession than to a rapid liquidation of dollar-denominated assets.

*Roosevelt D. Bowman is a trader/analyst in the Federal Reserve Bank of New York’s Markets Group.