In response to the enormous losses experienced during the recent financial crisis, the Basel Committee on Banking Supervision reached a new international agreement on the amount of capital banks will be required to hold. The “Basel 3” agreement introduces a new, two-tiered structure for regulatory capital requirements involving much more stringent standards for the amount of common equity banks must hold. In a previous post, I discussed how the minimum capital requirement component of the Basel 3 agreement was calibrated. In this post, I explain how the other component—the common equity buffer—was calibrated using information on losses during the recent and past financial crises.

The new Basel 3 capital standards have a two-part structure. The first part is the regulatory minimum requirement that banks must have common equity equal to no less than 4.5 percent of their risk-weighted assets (RWA). The second part is the expectation that banks will hold a buffer of common equity equal to at least 2.5 percent of RWA above the regulatory minimum level. The buffer could increase to as much as 5.0 percent of RWA at times when national authorities judge aggregate credit growth to be excessive. (Globally systemically important banks will have an additional capital surcharge on top of the buffer discussed in this post; see BIS for a description of the design and calibration of that surcharge.)

The purpose of the buffer is to ensure that banks hold sufficient capital to withstand the losses coming from a systemically stressful event and still have common equity above the regulatory minimum level. To this end, banks whose capital ratios fall into the buffer will face increasingly stringent restrictions on their ability to make capital distributions such as dividend payments, stock repurchases, and discretionary payments to employees. The idea is to introduce an automatic mechanism for retaining capital in the firm and for providing incentives for banks to increase capital—perhaps by new equity issuance—at times when a bank’s common equity is low relative to its risk exposures. This automatic mechanism reflects the experience gained during the recent crisis, when some banks were reluctant to reduce distributions or to issue new common equity, possibly because of concerns about signaling to markets that the bank’s current capital position was weak. An automatic mechanism reduces the discretion around such capital-conserving actions.

This capital conservation buffer is a conceptual innovation in regulatory capital requirements. But in practical terms, how did the Basel Committee decide how big the buffer should be? A recent paper released by the Committee explains an important part of its analysis. The key to this analysis goes back to the basic motivation for the buffer—to ensure that banks have sufficient capital to withstand the losses associated with a systemically stressful event and remain viable going concerns. The recent global financial crisis, along with historical banking crises in individual countries and regions, provided many real-world examples of the losses banks can sustain during such stressful macroeconomic and financial market environments. The Basel Committee’s analysis focused on these real-world examples.

In particular, the analysis looked at losses sustained by each of a group of seventy-three large banks from fourteen countries during the 2007:Q3-2009:Q4 period. The chart below, taken from the report, illustrates the distribution of cumulative pretax net income for the seventy-three banks in the sample. Overall, about one-third had negative cumulative net income during this period. Since the intent was to understand the size of potential losses during a crisis period, the analysis focused on these banks. “Peak” losses for the banks—defined as the sum of losses (negative net income) for whatever run of consecutive quarters produced the largest loss amount—averaged about 5.4 percent of RWA, while median peak losses were smaller (3.2 percent of RWA). Median peak losses were smaller than average losses because of the presence of a few banks with very large peak loss amounts. 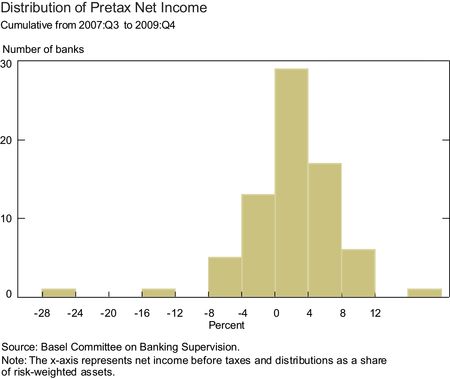 These results are from the recent global financial crisis; the report also examined peak losses (negative net income) experienced by individual banks during previous financial crises affecting individual countries or regions. These included the Japanese crisis (2000-02); the Korean foreign exchange (1997-99) and credit card (2003) crises; the Swedish and Norwegian crises (1988-93); the Finnish crisis (1990-93); and the U.S. commercial real estate crises of the late 1980s and early 1990s. While results varied considerably across these episodes, in general typical losses in more systemic crises ranged from 4.0 percent to 5.0 percent of RWA, while losses in less systemic crises were typically in the range of 1 percent to 3 percent of RWA.

There are some reasons to think of these figures as lower bounds for the losses that large banks could actually experience in a financial crisis. As noted in the Basel Committee’s report, these figures are averages or medians; losses experienced by some individual banks were significantly larger than these figures. In addition, losses actually realized by individual banks may have been mitigated by official-sector intervention. Finally, and perhaps most significantly, the analysis is affected by so-called survivorship bias, as banks were only included in the sample as long as they were active and reporting data. This filtering means that some banks experiencing very large losses were not included and that any resolution-related losses were also excluded from the reported loss figures.

In part to address these concerns, the Basel Committee report also examined stress test results conducted by banking authorities during 2009, including the U.S. Supervisory Capital Assessment Program results. While the different stress tests embodied a wide range of approaches and assumptions, the average stress losses (decrease in capital) ranged from 1.5 percent to 4.0 percent of RWA across the countries in the sample. These results, which are forward-looking and thus less susceptible to some of the biases discussed above, are broadly consistent with the range of realized financial crisis outcomes; though again, results for some individual institutions were much larger than the averages.

Keeping these caveats in mind, we note that the Basel Committee’s analysis suggests that typical crisis period losses for large banks range between 3 percent and 5.5 percent of RWA. One important thing to note is that the RWA in the denominator of these figures is calculated under a different set of rules than the rules that will prevail when the new capital regulations come into effect. The general belief is that RWA for a given set of positions will tend to be higher under the new Basel 3 regime. If we take this translation effect into account, these figures suggest that the 2.5 percent to 5.0 percent buffer adopted by the Basel Committee is generally consistent with the actual losses experienced by large banks during the recent and past financial crises.