The Debt Ceiling as a “Fiscal Rule” -Liberty Street Economics

The Debt Ceiling as a “Fiscal Rule”

A few months ago, the federal government was once again confronted with the need to raise the statutory limit on the amount of debt issued by the Treasury. As in the past, the protracted stalemate and associated uncertainty led to calls to eliminate the debt ceiling. In this post, I make the counterargument. Likely because of its straightforwardness, the debt ceiling has been an effective “fiscal rule.” The reduction of the federal deficit from the mid-1980s to the mid-1990s was due in large part to a series of budget compromises, all of which were accompanied by the need to raise the debt ceiling.

It is widely accepted that the United States is on an unsustainable fiscal trajectory. From 36.2 percent at the end of fiscal year 2007, federal debt held by the public expressed as a percentage of GDP is projected to have reached around 67 percent by the end of fiscal year 2011, according to the Congressional Budget Office (CBO). Moreover, under current policies, it is projected to reach 95-100 percent by the end of fiscal year 2021. The debt ceiling of $14.294 trillion, which became effective in early 2010, became binding in May 2011. The Treasury resorted to methods learned in past debt ceiling impasses to continue meeting obligations while not exceeding the limit on debt. But those methods were projected to be exhausted by early August. For much of the month of July, the country was riveted to the crafting of legislation to raise the ceiling. Financial markets and the overall economy were confronted with the risk that the ceiling would not be raised in time, thereby resulting in a sharp decline in federal outlays. The situation led some to argue that the time has come to eliminate the debt ceiling. For example, columnist George Will noted that the United States is the only developed nation with such a law, and that it is potentially dangerous because there is a strong desire by some members of Congress to cast a symbolic vote against increasing it. Similarly, Moody’s argued that the debt ceiling “creates periodic uncertainty” and “adds a small probability of default that would not otherwise exist” if the debt ceiling were eliminated.

While in some cases, the raising of the debt ceiling is a routine matter that receives little attention, there have been many episodes in which it became a protracted and politically divisive affair. Indeed, that was the case the last time the United States faced an unsustainable fiscal trajectory. By 1985, the country had experienced three consecutive fiscal years of federal deficits of around 5 percent of GDP. While still relatively low, federal debt held by the public had risen by roughly 10 percentage points of GDP from 1980 to 1985, requiring that the debt ceiling be raised fourteen times over that six-year period. Concern about this rapid increase in debt intensified, both domestically and abroad, setting in motion a series of legislative efforts to put U.S. fiscal policy back on a sustainable path. This process began with the passage of Gramm-Rudman-Hollings I and II, enacted in 1985 and 1987, respectively, followed by the Omnibus Budget Reconciliation Act of 1990 and the Omnibus Budget Reconciliation Act of 1993. In all four cases, the need to raise the debt ceiling increased the sense of urgency and no doubt contributed to the various compromises that needed to take place. Below are brief descriptions of each Act.

The chart below presents changes in the primary structural balance as a percentage of potential GDP, estimated by the CBO, for fiscal years 1980-2010. Included in the chart are the dates of passage of the legislation discussed above. Following passage of Gramm-Rudman-Hollings I, the primary structural deficit continued to increase. Although it may have increased less than otherwise would have been the case, it is generally accepted that this first effort was not as successful as hoped. In the first year after passage of Gramm-Rudman-Hollings II, there was a substantial improvement in the structural balance followed by two years of essentially no change. The passage of the Budget Enforcement Act of 1990 initially resulted in a significant increase in the primary structural deficit, followed by a swing to surplus and then no change. The initial increase in the deficit is widely regarded to have been by design. The economy had entered a recession in mid-1990, and while OBRA90 established caps on discretionary spending, the caps put in place for fiscal year 1991 actually provided for a significant increase over the previous year. Finally, after passage of OBRA93, there were several consecutive years of primary structural surpluses. 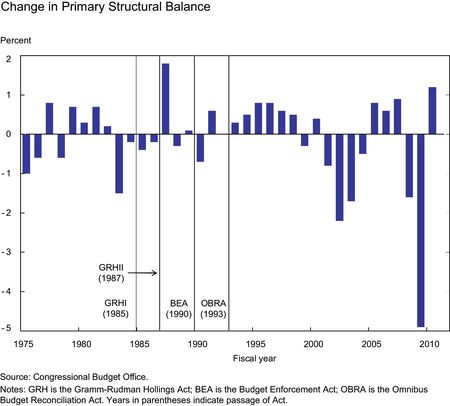 One could reasonably argue that the compromises needed to reduce the deficit would have occurred anyway, and there is no way to disprove that position. But unlike many other aspects of the federal budget process, the debt ceiling—or credit limit, if you will—is very transparent. The need to raise it occasionally forces policymakers to confront painful choices that they might otherwise prefer to avoid.