« When Do Trading Frictions Increase Liquidity? | Main | Historical Echoes: Winning Essay on Central Banking Gets $100 (in 1910) »

The euro area sovereign debt crisis sparked an outflow of bank deposits from countries in the periphery to commercial banks in Germany and other core countries. The outflow highlighted a key aspect of the payments system linking national central banks in euro area countries. In particular, net outflows from private commercial banks in a given country are matched by credits to that county’s central bank, with those credits extended by central banks elsewhere in the euro area. In this post, we explain how the credits affected the adjustment pressures faced by countries in the euro area during the ongoing debt crisis.

The four euro area periphery countries (Periphery-4)—Greece, Ireland, Portugal, and Spain—and Italy were running sizable current account deficits in the years leading up to the sovereign debt crisis, with domestic spending running ahead of domestic incomes. The countries filled the gap by borrowing from abroad, almost entirely from foreign private investors. With the crisis, however, private capital flows have gone into abrupt reverse, with foreign investors liquidating existing holdings in the periphery. Funds lost via capital flight have been offset, in part, by official adjustment assistance from the International Monetary Fund (IMF) and the European Union for Greece, Ireland, and Portugal, as well as by sales of the periphery countries’ own external assets (see our recent New York Fed study). But another important source of financing has come from central banks elsewhere in the euro area, via the operation of the region’s system for settling commercial bank transactions.

The Eurosystem, which comprises national central banks in the euro area and the European Central Bank (ECB), is currently managing large imbalances among its central banks. The euro area’s common payments system, known as TARGET2, facilitates the movement of bank reserves across countries as the counterpart to cross-border commercial bank transactions. For example, when a Greek resident writes a check to a German company to make a purchase, the check is cleared via a transfer of reserves from the Greek commercial bank to the German bank. The transfer occurs via national central bank transactions within the Eurosystem, with the Bundesbank acquiring a claim on the Eurosystem and the central bank in Greece incurring an equal liability.

Prior to the ongoing debt crisis, reserve outflows and inflows involving commercial banks in the Periphery-4 and Italy roughly balanced, with a payments deficit on transactions in goods and services represented by their current account deficits offset by a surplus of foreign investment flows into these countries. With the sovereign debt crisis, capital flight from the periphery countries and Italy has caused a drain in bank reserves from these countries into Germany. Bundesbank claims on the Eurosystem have gone from €100 billion in early 2010 to just over €500 billion as of November 2011. This total is close to the combined liabilities of central banks in the Periphery-4 and Italy, with the most recent jump due largely to a surge in banking outflows from Italy (see chart below). 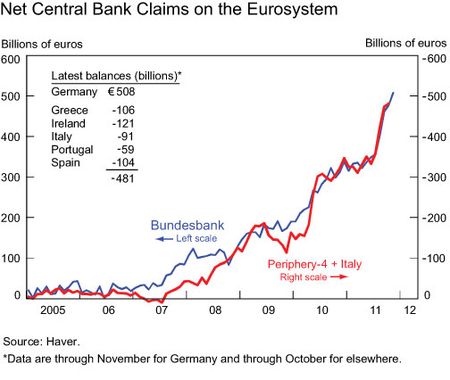 Commercial banks in the periphery have moved to offset the loss in reserves by increasing their borrowing from their national central banks. In particular, through refinancing operations, commercial banks receive new reserve money by posting eligible securities as collateral. Moreover, central banks in Greece and Ireland have created Emergency Liquidity Assistance (ELA) programs, allowing commercial banks to access funds using collateral that would not normally be acceptable under ECB guidelines. (Even so, the ongoing operations of the programs are subject to ECB approval.) Without this central bank lifeline, commercial banks would be forced to sell off assets to offset the cross-border loss of bank reserves. The opposite trend holds in Germany, with commercial banks responding to the heavy reserve inflows by reducing their borrowings from the ECB (see chart below). 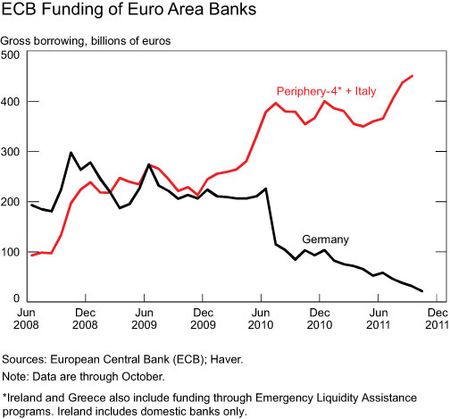 The risk to the Eurosystem from cross-border imbalances is limited by the collateral posted in refinancing operations. In accordance with Eurosystem rules, central banks book collateral at current market value, with local commercial banks subject to margin calls to offset drops in market value. In addition, substantial haircuts are applied to lower-rated securities. Any losses would be shared by the Eurosystem as a whole rather than by creditor central banks. The Bundesbank, for example, would bear roughly 27 percent of any losses, in line with its share in the Eurosystem. A key exception concerns commercial bank reserves created in Greece and Ireland via their ELA programs. In Ireland, the credit risk for the estimated €48 billion now outstanding under the program rests with the country’s central bank and ultimately with the Irish government. Greece inaugurated a similar ELA program in August, which has extended €41 billion to local commercial banks.

Notably, the net liability position of national central banks in Greece, Ireland, and Portugal with the rest of the Eurosystem has stabilized in recent months even as the net positions in Spain and Italy have increased significantly. Indeed, the three countries’ combined net liability position as of October 2011 was no higher than it was at the end of last year. One factor limiting ongoing growth in liability positions is that commercial banks have already borrowed against the bulk of their eligible collateral. (Even in Ireland, where the ELA program allows for some easing in collateral requirements, estimated ELA credit outstanding peaked in February 2011.) Similarly, declines in the market value of securities posted as collateral further limit commercial banks’ ability to borrow against collateral. Another factor helping to offset the net outflow of commercial bank deposits from these countries has been the arrival of official adjustment assistance from the IMF and the European Union. The three countries have received a total of roughly €80 billion thus far this year, in effect a transfer of reserves into local banking systems.

A byproduct of the euro area settlement system is that it provides automatic balance-of-payments financing to offset the capital flight through the banking system. There is no direct correspondence between payments imbalances in the Eurosystem and countries’ current account balances, since the current account balance equals net financial flows of all types. Even so, absent Eurosystem credit, countries facing net banking outflows would need to find alternative financing. The combined current account deficits of the Periphery-4 plus Italy totaled €131 billion for the four quarters ending in 2011:Q3. The €183 billion in Eurosystem lending to these countries was more than sufficient to fund these deficits. Indeed, along with program assistance, it helped to finance some €145 billion in private capital flight (see exhibit below). 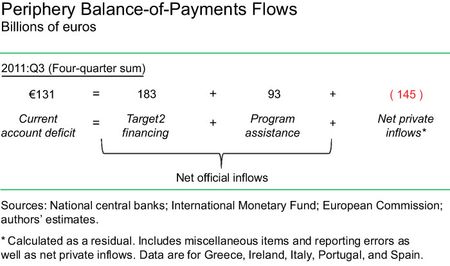 Without Eurosystem credit, the Periphery-4 and Italy would have needed to attract an offsetting increase in capital inflows (or a reduction in capital flight), likely via still higher interest rates. The only alternative would have been a sharper compression in domestic demand to force current account deficits to shrink more rapidly.

*Matthew Higgins is a vice president in the Emerging Markets and International Affairs Group of the Federal Reserve Bank of New York.

Actually, central banks don’t have total control of where the market may lead; they are only capable of making interventions so as to influence the pace of the trend.

Whre do the national central banks get their funding from? I assume advances from the ECB?

I don’t quite understand the last paragraph, ‘Without Eurosystem credit, the Periphery-4 and Italy would have needed to attract an offsetting increase in capital inflows (or a reduction in capital flight), likely via still higher interest rates. The only alternative would have been a sharper compression in domestic demand to force current account deficits to shrink more rapidly.’ All these offsetting flows kept interest rates lower for the Periphery-4 countries? Lower than 300% on the one year note for Greece, and 7% for Italy, Spain and Portugal on their 10 year debt. And the exit strategy for these offsets is no doubt the same as the US Fed’s? We haven’t heard much about ‘exit strategies’ recently, perhaps you could enlighten us.

The TARGET2 imbalances demonstrate that it is more critical to adjust the external account than the budget deficits. The Eurozone is testing the limits of divergence. http://ppplusofonia.blogspot.com/2011/12/eurozone-crisis-tests-limits-of.html . SEE PPP Lusofonia