The Participation Rate over the Recent Business Cycle 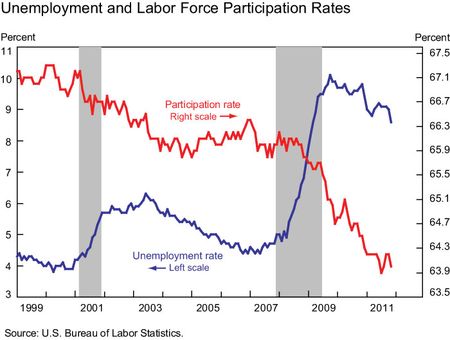 What Is the Underlying Trend? 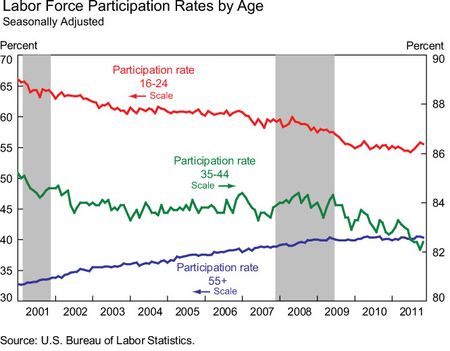 The next chart presents this estimated aggregate trend participation rate and compares it with the actual rate. As of second-quarter 2011, the actual rate was roughly a full percentage point below this trend. At this point, it is not clear whether this is strictly the result of the weakness of the labor market or whether the trends established over the past decade have begun to change. 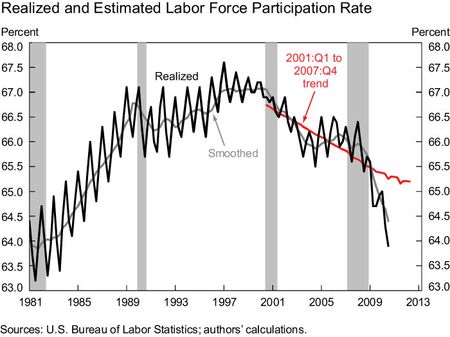 Which Demographic Groups Account for the Decline Below Trend?

The chart below presents the percentage point deviation from trend by age, sex, and education attainment. The first observation is that the labor force participation of men of all ages at all levels of education attainment has declined considerably more than that of women. A possible explanation of this phenomenon is that industries in which men have above average representation, such as construction, have experienced particularly large declines of output over the past several years, whereas industries in which women have above average representation, such as education and healthcare, continued to expand even during the recession. A second observation is that the participation rates of older workers, even those with college educations, have tended to decline more than that of younger workers. In this case, several factors are likely at work, ranging from early retirement packages, lack of job opportunities for given skill and/or salary levels, and possibly age discrimination by some employers. 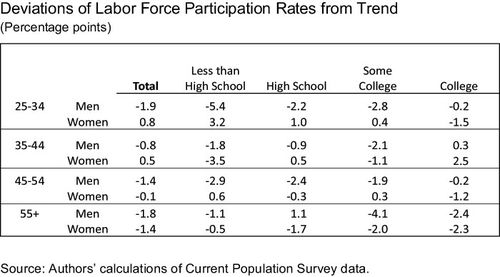 No one knows for certain what path the participation rate will take over the next twelve to twenty-four months. Will it revert back to the trend of the past decade discussed above? Will it remain at the level of the first half of 2011? Or has the decline of the past two years established a new trend? While completely hypothetical, the chart below provides a visualization of the range of outcomes that these three potential paths imply. By the end of 2013, the range approaches a full three percentage points. All else equal, that is the range of potential outcomes for the unemployment rate. 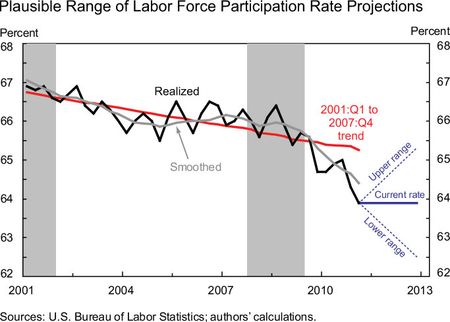 * Josiah Bethards is an analyst in the Federal Reserve Bank of New York’s Office of Financial Stability and Regulatory Policy.

**Joseph Song is a former assistant economist in the Federal Reserve Bank of New York’s Research and Statistics Group.

Predictions about the employment rate is always difficult. The future will show us how it goes.

Didn’t the participation rate also hit new lows during the 1970-mid 1990 period until we had welfare reform? For the last ten years, welfare has come storming back even easier than in the past. Only now it’s done by completing tax returns. With the IRS it’s virtually no verification. We need to stop rewarding winners and losers in the personal and corporate world via the tax code and flaten it out. You get baby sitting credits, ‘earned’ income credits,stimulus credits, etc. Small wonder fewer people are bothering to look for work. Has anyone audited the BLS and Commerce Census staff, methodology and reports to ensure the integrity of the data? Once upon a time it was felt to have been politicized. Perhaps that time has returned. If I were in charge at those bureaus, I would ask for audits to ensure the integrity of the results.