« How Has the Business of International Banking Changed? | Main | Historical Echoes: Return to Jekyll Island (Not The Creature from) »

Payday lenders make small, short-term loans to millions of households across the country. Though popular with users, the credit is controversial in part because payday lenders are accused of targeting their seemingly high-priced credit at minority households. In this post, we look at whether black and Hispanic households are in fact more likely to use payday credit. We find that, unconditionally, they are, but once we control for financial characteristics—such as past delinquency, debt-to-income ratios, and credit availability, blacks and Hispanics are not significantly more likely than whites to use payday credit.


How Payday Credit Works and Why It’s Controversial
Compared to a mortgage, say, payday loans are pretty simple. Applicants must provide lenders with a bank statement and proof of employment, such as a pay stub, and the lender may check the applicant’s credit score on Teletrack, the payday lenders’ credit bureau. If the applicant checks out, he or she writes the lender a postdated (until payday) personal check and the lender hands the borrower cash in exchange. Loans range from $50 to $1000, but the typical loan is $300. The loan is due on the borrower’s payday, although borrowers can (and many do) roll over the loans. Payday lenders typically charge about $15 per $100 borrowed. At that price, the APR (Annual Percentage Rate) on a two-week loan is 390 percent.

The high APR associated with payday credit is one reason it’s controversial. Another reason is the high rollover rate, which some observers see as evidence that payday lenders trap users. The third reason payday credit is controversial is the impression that payday lenders target blacks and Hispanics. We are silent on the first two issues, but we do have something to say on the third.

A number of studies, summarized in Prager (2009), examine the locations of payday lenders to try to infer if payday lenders target minority neighborhoods. Several studies have found that payday lenders are indeed more likely to locate in neighborhoods with disproportionately large Hispanic and/or black populations. Importantly, however, this literature uses data at the county or Zip code tabulation area, so the authors can’t really say which households are actually using payday credit. Nor can they control for household-level income and other variables that might influence payday credit usage. The household-level data we study allow us to do both.


New Data on Payday Credit Usage
Our information on payday credit usage comes from the Federal Reserve’s Survey of Consumer Finances (SCF), a triennial, nationally representative survey of about 4,400 households. The 2007 survey, the latest available, is the first SCF that asked about payday credit usage. The survey did not ask about payday credit by name, but instead asked, “During the past year, have you (or anyone in your family) borrowed money that was supposed to be repaid in full out of your next paycheck?” Of the survey population, 2.4 percent of families answered yes.

There are some educational differences as well. Perhaps surprisingly, payday credit users are not the least educated members in society; users were actually more likely to have a high school degree or to have a GED than were nonusers. However, they were less likely than nonusers to have completed college.


The financial comparison below reveals that payday credit users are distinctly worse off than nonusers. Firstly, and not surprisingly, users were much less likely than nonusers to be savers. They also had much lower income: median income for users was about $31,000, compared to about $48,000 for nonusers. Users’ assets were lower by an order of magnitude: $17,000 versus $220,000. While users also had less debt, their net worth is much lower compared to nonusers: $6,000 versus $129,000.

The last two rows in the table below indicate that payday credit users are more likely to have credit problems than nonusers. Twenty-five percent of users reported being at least 60 days late on a payment over the last year, versus just 5 percent for nonusers. Even more dramatically, 56 percent of users reported being turned down for credit sometime in the last five years, versus about 16 percent for nonusers.


Conditional Comparisons
While the unconditional comparisons suggested that blacks and Hispanics were more likely to use payday credit, those comparisons did not control for the demographic and financial differences noted above. What we really want to know is whether black or Hispanic households with the same demographic and financial characteristics as a white household are more likely to use payday credit. To get at that, we estimated statistical models that determine the probability that a household uses payday credit as a function of various control variables. The estimated models tell us, based on the patterns observed in the data, which variables are important determinants of payday credit usage and which are irrelevant.

The second set of bars shows that when we control for the demographic variables listed in the first table above—age, gender, etc.—the race gaps fall substantially but are still large and highly statistically significant.

The final set of bars indicates that when we control for demographic and financial variables (as listed in the second table above), the race gaps fall dramatically and are no longer statistically significant at even the 90 percent confidence level. This result says that, conditional on demographic and financial characteristics, blacks and Hispanics are not significantly more likely to use payday credit than are whites. 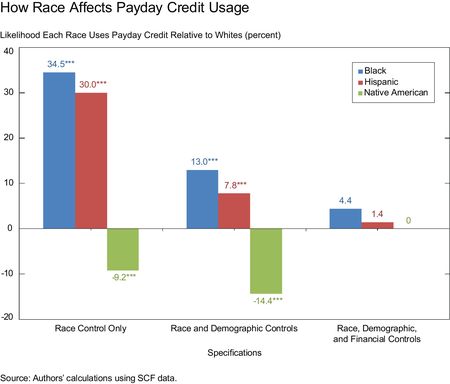 For readers that revel in details, the table below reports the full regression results (standard errors available upon request). The three columns of the table correspond to the three models just described. The reported numbers give the change in the probability that a household uses payday credit, given a small change in a continuous variable (such as income) or a switch in a discrete variable (such as race), holding all other variables in the model constant. A single * indicates a variable is statistically significant at the 90 percent confidence level.

The coefficients on the race variables correspond to the numbers in the chart above, so there is nothing new there. What the detailed results do reveal is that the debt-to-income ratio, past credit delinquency, and credit availability are the most important variables in eliminating the race gap. A small change in any one of those variables is associated with a 50 to 60 percent increase in the likelihood of using payday credit! The important role of credit problems in explaining payday credit usage should come as no surprise, as only someone with credit problems would likely resort to such expensive credit. But more to the point, if blacks and Hispanics are more likely to experience credit problems, that fact, and not their race, may explain their disproportionate use of payday credit.

Of course, there could be a chicken and egg problem here; perhaps it’s the use of payday credit that causes credit problems, rather than the other way around. Alas, resolving that question of causality would require more than a blog post. The most we can say based on our evidence is that once we control for demographic and financial characteristics, the link between payday credit usage and race is statistically insignificant.

Posted by Blog Author at 07:00:00 AM in Financial Institutions, Financial Markets

Turned down for credit in the past 5 years may itself be a minority profiling problem. What does the regression look like with the other financial variables, but not that one?