How Has the Business of International Banking Changed?

In this post, I focus on the broad historical progression of international banking activity. This broad progression serves as a backdrop for a range of other discussions and posts on global banking, on issues such as foreign banking organizations’ use of liquidity facilities in the United States and the role of banks in international risk-sharing and international transmission of shocks. It also helps explain the policy regimes in place through recent financial crises and even some of the data gaps that regulators and researchers have encountered.

Instead of going back to medieval times, I’ll start with the late 1800s. International economic historians divide the years from the late 1800s to around 2000 into three main periods. The first period—the “First Age of Globalization”—spans 1870 to 1914, and includes the latter part of the Industrial Revolution, the expansion of large-scale capital investments (such as in railways), a deepening of global finance, and expanded prosperity. In this period, cross-border borrowing and lending by banks helped finance large-scale projects. This all ground to a halt with World War I, as the chart below illustrates. 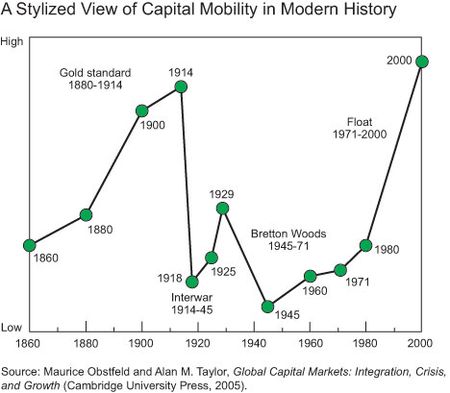 World War I marks the onset of the second period—what economists Raghu Rajan and Luigi Zingales call “The Great Reversal of 1914 through 1939.” This period is characterized by financial collapse and the Great Depression. They forcefully argue that this episode shows that globalization is not an immutable economic force, and a backlash against it can be disastrous. Indeed, as the previous chart shows, after restarting briefly, financial integration again collapsed with World War II and recovered slowly thereafter.

Recognizing the importance of avoiding the mistakes of the interwar period, the Allies met in Bretton Woods, New Hampshire, in 1944 to create institutions to oversee the repair of the international financial system and to ensure trade and recovery among nations. This effort gave rise to the International Monetary Fund and the World Bank, and in 1947 to the General Agreement on Tariffs and Trade (in Geneva), which evolved into the World Trade Organization. The policy focus of these organizations was institution-building, recovery, and the financing of at least temporary balance-of-payment difficulties that arose at the sovereign level. 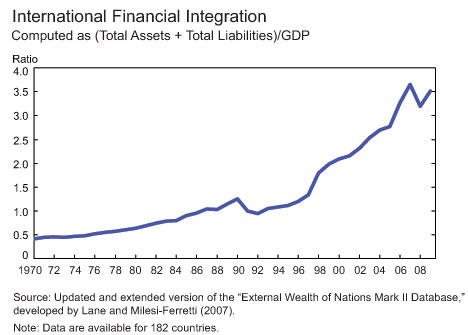 A few other broad observations define this last half-century of financial integration. One is that the form of international lending activity has evolved; another is that the counterparties in these activities have evolved over time.

To illustrate these points, the chart below presents the types of loans extended by banks in BIS reporting countries. The left panel shows the volumes of different types of lending to counterparties in developed countries, while the right panel shows lending to counterparties in developing countries. The green lines indicate local lending by bank affiliates established in foreign markets; the red lines convey total cross-border and local lending. Initially, the main form of international banking activity was cross-border lending; activity in the form of local lending was minimal. Flows from investors in large developed countries were intermediated through banks and often were used to finance the fiscal imbalances of emerging market sovereigns. 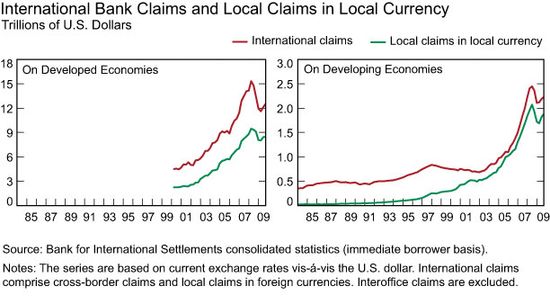 In this environment, regulators focused their attention on sovereign exposure, and forms of country risk analysis were performed and tracked. Attention turned to banking and exchange rate crises, the dynamics of macroeconomic excesses, and volatility among emerging market sovereigns. After a number of sovereign debt crises, research concentrated on issues such as understanding sovereign debt write-downs, defaults, and ways to coordinate across creditors. Over time, sovereign debt played a reduced role in international lending, and counterparties of the foreign banks increasingly became private-sector corporate customers. Banks sometimes followed their customers abroad, providing a range of services. The emphasis of policy and analysis evolved accordingly.

For example, the breakup of the Soviet Union and the buildup of well-functioning, privately owned banking systems occurred in emerging Europe. There were a number of episodes of currency and banking crises around the world—as detailed, for example, in Carmen Reinhart and Kenneth Rogoff’s This Time Is Different: Eight Centuries of Financial Folly (Princeton University Press, 2011)—often with the need for banking system recapitalization. These developments contributed to extensive foreign bank entry into emerging market economies, in some cases leaving the banking systems of emerging economies majority-owned by foreigners.

The previous chart also shows that, consistent with foreign bank entry, local lending by the foreign banks’ branches and subsidiaries grew and displaced some of the cross-border lending. Local claims now became the dominant form of lending through which banks in BIS reporting countries financed activity in the developing world. In a simultaneous development, international banking activity between industrialized countries grew. From less than $5 trillion around 2000, the amount soared to more than $15 trillion over the next decade. The use of derivatives, the extension of guarantees, and the use of credit commitments also soared over the period.

Regulators correspondingly expanded the scope of data collected and analyzed. Tensions arose as the regulators of a parent bank and of an affiliate bank were sometimes at odds over possession of information. Some affiliate country regulators felt that they had insufficient information on the institutions influencing their economies. Affiliate market regulators also struggled with the question of whether foreign banks should enter as branches, enabling them to potentially benefit more from supervision by established regulators in the developed financial market, or as subsidiaries, leading them to report more information locally and have their own ca
pital requirements. There was, perhaps, not as much of a distinction made on this point from the perspective of the parent bank regulators. Policymakers and bankers worried about the stability of lending flows to these local markets and whether there was a level playing field for local banks.

Given these trends, researchers turned their attention to understanding what drove foreign entry, and understanding its consequences. The consequences continue to be researched today: Are foreign-owned banks stable lenders when they enter host markets? What are the differences between the actions of state-owned banks and private banks? What stability and efficiency issues arise in lending to small and medium-size enterprises compared with large ones? How does foreign bank entry change development and growth prospects? What is the role of banks in the transmission of international shocks and the consequences for policy effectiveness? Overall, these developments helped shape the focus of policy initiatives and research on international banking in recent decades.