« Historical Echoes: American Consumerism, Then and Now, with Product Timeline | Main | Is Risk Rising in the Tri-Party Repo Market? »

How the High Level of Reserves Benefits the Payment System

Since October 2008, the Federal Reserve has increased the size of its balance sheet by lending to financial intermediaries and purchasing assets on a large scale. While these actions have increased the amount of reserves in the U.S. banking system and therefore raised concerns about excessive bank lending and inflation, we can document an important and overlooked benefit of the high level of reserves: a significantly earlier settlement of payments on Fedwire, the Federal Reserve’s large-value payment system. Quicker settlement on Fedwire improves liquidity throughout the economy, reducing uncertainty and risk for people and firms that rely on banks. At the same time, the Fed has been extending less intraday credit, which reduces the public’s risk exposure.

We focus our analysis on the Fedwire Funds Service, the major large-value payment system (LVPS) in the U.S. financial system. (The analysis is based on our forthcoming article in the New York Fed’s Economic Policy Review.) LVPSs allow the transfer of large, time-sensitive payments between banks and some other financial institutions. They form part of the basic structure, or “backbone,” that allows banks and other parts of the financial system to function better. Payments on Fedwire are settled by the transfer of reserves from the sender’s Federal Reserve account to the receiver’s Federal Reserve account. Like LVPSs in many other countries, Fedwire is a real-time gross settlement (RTGS) system, meaning that payments are settled one at a time, as soon as the payment instruction has been issued.

To understand the incentive to delay, consider the following example: Suppose “Thrifty Bank” must make a payment to “Receiver Bank,” but currently lacks enough reserves to do so. Thrifty Bank could borrow from the central bank, but this may be costly—either because the central bank charges a fee for the credit it provides, or because it requires Thrifty Bank to post collateral, which has a cost because the assets serving as collateral could be put to another use. On the other hand, Thrifty Bank could delay the payment, which in general would result in a cost of delay for itself (via inconvenience to its customers) and for the intended receiver of the payment. Now, if Thrifty Bank delays the payment, it may later receive a payment from another bank, say “Flush Bank.” The payment from Flush Bank would increase the amount of Thrifty Bank’s reserve balances, allowing it to make its delayed payment to Receiver Bank without the need to borrow from the central bank. By waiting for that payment from Flush Bank, Thrifty Bank reduces its own cost of funds relative to the cost of sending the payment promptly and incurring borrowing costs for funds from the central bank, but now imposes delay costs on other members of the payment system. As a result, all members of the payment system have an incentive to put off their payments, resulting in excessive delays.

In response to this incentive to delay, central banks typically provide intraday credit to payment-system participants at a very low cost, allowing them to borrow reserves that must be repaid the same day. At this low cost, banks had borrowed large amounts from the Fed to make these payments.

Recently, the Fed’s asset purchases have endowed banks with high levels of reserves, which, in theory, should lessen the delay incentives described above, as banks have a reduced need to borrow to make a payment, thereby lowering their cost of making a payment promptly. This theoretical view generates our hypothesis: that the high levels of reserves provided to the banking system by the Fed’s actions should reduce delays and result in faster settlement of payments on Fedwire. Furthermore, we expect a reduction in intraday borrowing from the Fed. Few banking systems have ever operated with a large amount of excess reserves, so the market experience since October 2008 provides a rare chance to test the hypothesis that higher reserves quicken payments.

The following chart illustrates the increase in the size of bank reserves and the timing of payments on Fedwire from 1998 through late 2011. Reserves, measured on the right axis, increased from very low levels, before October 2008, to over a trillion and a half dollars in the second round of the large-scale asset purchase (LSAP) program. The timing of payments is shown in the chart in the three lines, measured on the left axis, that show the time by which the 30th, 60th, and 90th deciles of payment value settled. For example, the yellow line shows the time at which 30 percent of the value transferred on Fedwire had settled. In 2007, 30 percent of the value of Fedwire had typically settled by shortly after 2:00 p.m. By the summer of 2011, 30 percent of the value of Fedwire had typically settled before 11:00 a.m., speeding up the settlement time by more than three hours. It appears from this chart that the effect of the large increase in reserves was to hasten payments significantly. 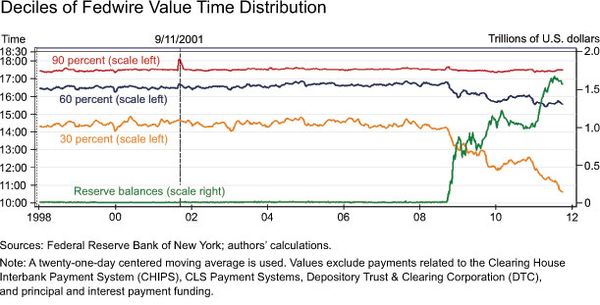 To test our hypothesis further, we estimated a model to explain the changes in timing of Fedwire settlement over the period between 1997 and 2011, using a method similar to Armantier, Arnold, and McAndrews (2008). We found that the increase in reserve balances can explain the lion’s share of the quickening of settlement on Fedwire, while controlling for a host of other explanatory factors, such as changes in the timing of underlying payments that customers submit to banks. The table below displays the estimated effect of the change in reserves on payment timing. For example, the 30th percentile of Fedwire value moved to settle three hours and thirty-seven minutes earlier. The higher opening reserve balances alone would explain an earlier settlement of three hours and three minutes, 88 percent of the change in timing, holding all other influences constant at their mean values during the sample period (the asterisks indicate the level of statistical significance of the estimated coefficient on the change in opening balances variable, with one indicating significance at the 10 percent level, two at the 5 percent level, and three at the 1 percent level).

The last chart shows the level of intraday credit extended by the Federal Reserve to Fedwire participants, measured as the daily maximum amount extended by the Federal Reserve. There has been a dramatic decline in the amount of credit extended since the expansion of reserve balances in October 2008. The reduced level of daylight credit has the benefit of reducing the risk exposure of Federal Reserve Banks, as well as the Federal Deposit Insurance Corporation’s (FDIC) fund. Indeed, the expected losses to that fund would be greater if some of the assets of a failed bank had been pledged to a Federal Reserve Bank to collateralize a daylight overdraft, as the collateral would not be available to pay other creditors of the bank. With a greater amount of reserv
es in the system, banks largely “prepay” for their liquidity needs by maintaining large reserve balances with which to fund their outgoing payments. 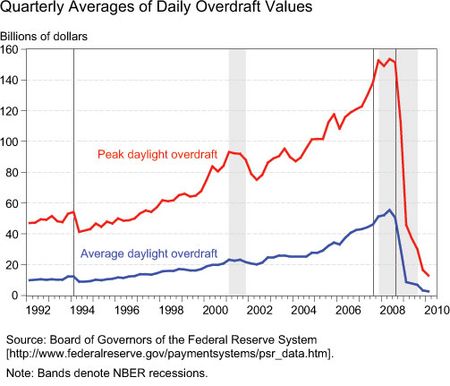 While the debate about the high levels of reserves and the risks of excessive bank lending or higher inflation continues (note that we believe that these fears are exaggerated, as discussed previously in a Liberty Street Economics blog post by Jamie, another post by our colleague Ken Garbade, as well as in a recent New York Fed staff report by Jamie, Antoine, and David Skeie), we are confident about the benefits conferred on the payment system by the high levels of reserves. These benefits include a quicker settlement of payments, as earlier settlement reduces uncertainty for payment-system participants and reduces operational risk. Importantly, this improvement in payment timing was accomplished with less credit extended by the Federal Reserve. The benefits of high levels of reserves should be considered when policymakers decide on the steady-state level of reserves they wish to provide to implement the Fed’s monetary policy.