Settlement Fails before the Fails Charge
Historically, market practice was to allow a failing seller to deliver after the original contracted settlement date at an unchanged invoice price. As the buyer didn’t pay the seller until delivery of the securities, the seller lost (and the buyer gained) the time value of the transaction proceeds over the fail interval. The prospect of losing the time value of money on the transaction proceeds provided incentive for the seller to deliver on the settlement date or as soon as possible thereafter.

While the historical practice worked well in normal interest rate environments, it proved inadequate in low-rate environments. As explained in this white paper, there’s limited incentive to borrow securities to avoid failing in a low-rate environment because the cost of failing, as measured by the time value of money, is commensurately low. As shown in the chart below, agency MBS settlement fails surged in 2003-04 as the target fed funds rate was lowered to 1 percent. They again increased sharply after the rate was lowered to its current 0-25 basis point range in December 2008. 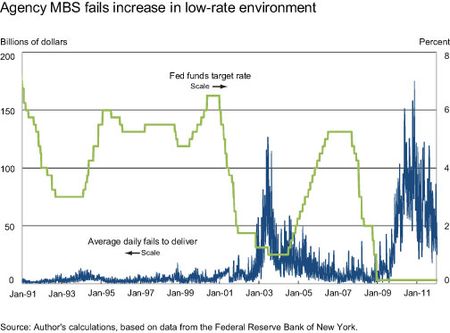 Costs of Fails
Settlement fails matter to both the counterparties of a trade and to market participants more generally. To the counterparties, fails can increase operational costs and counterparty credit risk, absorb scarce capital through regulatory charges, and hurt customer relations. More generally, persistent settlement fails at a high level can cause participants to withdraw from the market, adversely affecting market liquidity and stability. The Treasury Market Practices Group (TMPG) cited these costs in its announcement proposing fails charge recommendations.[1]

Will the Fails Charge Be Effective?
Will the fails charge reduce settlement fails? There are several reasons to think so. First, the increased cost of failing resulting from the charge provides a greater incentive for market participants to avoid fails in low-rate environments. Second, evidence from the May 2009 adoption of a fails charge for Treasury securities suggests that the charge in that market has been successful at reducing fails, as shown in the chart below. Lastly, the TMPG has said that it will closely monitor fails under the new regime, and that it may raise the level of the charge if its initial recommendation proves inadequate at reducing fails. 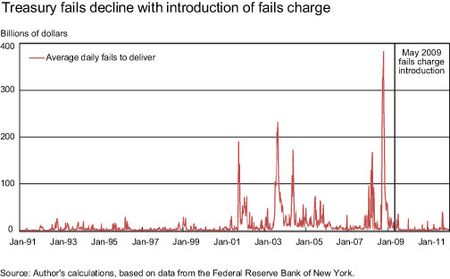 [1] The TMPG is a group of market professionals, sponsored by the New York Fed, committed to supporting the efficiency of the Treasury, agency debt, and agency MBS markets.

I agree with Michael Fleming’s analysis. Both the existence of the fail penalty and experience with a similar penalty for treasuries suggest that this rule will be successful at reducing MBS repo failures in a low rate environment. This should, in turn, improve market efficiency and stability. Failures generate negative network (knock-on) externalities. Thank you Michael.

The option of failure is it the same as the Japanese model?