Meet the Data
I use BHC data from Federal Reserve Y-9C regulatory filings covering the period 1994 to 2010. I use these data to analyze how a BHC’s sources of income have changed over time, controlling for mergers. To create a data set to set up this type of analysis, I first pick the top fifty BHCs in 2006 (as measured by assets). I then add to this sample of data by identifying all bank holding companies that are linked to these fifty BHCs through mergers. Consequently, in 2006 I have data on exactly fifty BHCs. In any previous year, more than fifty BHCs are in my sample because I include all the bank holding companies that merged into and became part of the top fifty in 2006. Similarly, in 2007 and later, there are fewer than fifty BHCs in the data because of continued mergers among them, in addition to exits.

The Importance of Nontraditional Income … for Large Banks
A striking difference across BHCs is the relative importance of nontraditional income. From 2001 to 2010 for the BHCs in the sample, I compute the fraction of nontraditional to total income. I then plot this distribution for three groups of BHCs in the chart below. Large BHCs are those linked to the top ten BHCs in 2006, medium are those linked to the top eleven to twenty, and small are the remaining BHCs. The “box-and-whisker” format characterizes a distribution, where the length of the box provides a measure of the dispersion across observations. Technically, the box portion comprises the 25th, 50th, and 75th percentiles of the distribution. 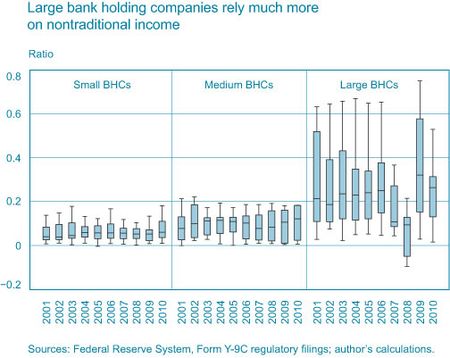 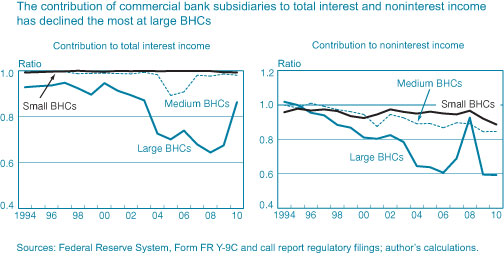 Adam Copeland is a senior economist in the Federal Reserve Bank of New York’s Research and Statistics Group.

I think we see that commercial bank subsidiaries have become less important income sources for small and medium BHCs….