« Soaring Tuitions: Are Public Funding Cuts to Blame? | Main | How Much Can Refinancing Reduce the Risk of Mortgage Defaults? »

One hundred and fifty years ago, the Morrill
Act

was signed into law, transforming the face of American higher education. The Act,
officially titled An Act Donating Public
Lands to the Several States and Territories which may provide Colleges for the
Benefit of Agriculture and the Mechanic Arts had as its main purpose the
creation of “at least one college in each state where the leading object shall be, without excluding other scientific or classical studies, to teach such branches of learning as are related to agriculture and the mechanic arts . . . in order to promote the liberal and practical education of industrial classes.”

Introduced by Vermont Congressman Justin Morrill, the Act laid the groundwork for a national system of public universities. It granted each state 30,000 acres of federal
land for each member of the Congress the state had. This land, or the proceeds
from its sale, were to be used to establish and fund universities that focused
on agriculture and engineering. Many of our leading universities (including MIT, Cornell,
the University of California
at Berkeley, and other universities that figure in U.S. News and World Report’s
top twenty-five list) were born of this law.

The Morrill Act also made higher education more democratic. Prior to the Morrill Act, higher education was largely the domain of the elite. The Act’s support for practical studies in agriculture and engineering helped other groups in the population, including farmers and working people, obtain a university education.

Twenty years after the first Morrill Act, the Second Morrill Act was passed in 1890. Under this Act, each state was required to show that “race
was not an admissions criterion, or else to designate a separate land-grant
institution for persons of color.” Many of our Historically
Black Colleges and Universities were established under this Act. Later, the 1994 Land Grant Institutions
for Native Americans received cash from Congress in lieu of land to attain
“land grant” status. These Morrill Acts established a total of 106 land-grant
universities, including at least one in each state. The distribution of these
1862, 1890, and 1994 land grant institutions is shown in the map below,
courtesy of the United
States Department of Agriculture. Following on the
lines of the Morrill Act, Congress later established sea grant
colleges (aquatic research, 1996), urban grant colleges
(urban research, 1985), space
grant colleges (space research, 1988), and sun grant colleges
(sustainable energy research, 2003). 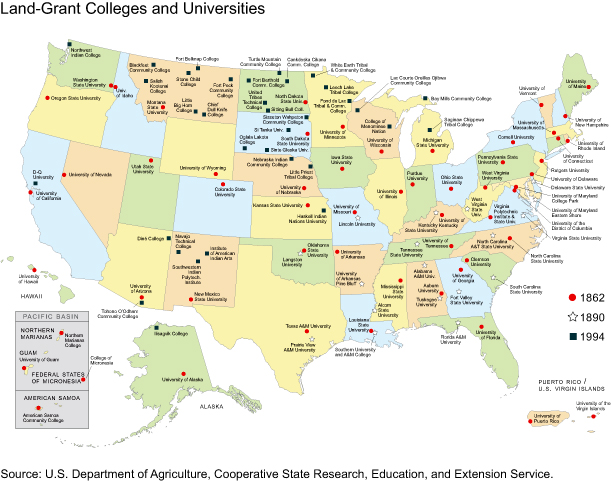 As we celebrate the sesquicentennial anniversary of
the Morrill Act, it is worth taking a few moments to consider the current
higher education scenario, and the path it is taking. As we demonstrated in our
recent Liberty Street Economics post, public support for higher education has fallen precipitously in recent years. In fact, state and local funding (as a percentage of total revenue for public institutions of higher education) has fallen every year over the past decade, dropping from 71 percent in 2000
to 57 percent in 2011. The revenue crunch has forced public institutions to
seek alternative avenues for funding. For one, they have resorted to shifting more
of the costs of education to students. Our recent post finds an economically
significant relationship between public funding cuts and public institution
tuition hikes. In fact, in the post-recession period, the states with the
deepest funding cuts were also the ones with the highest growth in tuition. For
the average student, this translates to ever-increasing student loans and
potentially larger debt burdens.

Rajashri Chakrabarti is an economist in the New York Fed’s Research and Statistics Group.

Amy Farber is a research librarian in the New York Fed’s Research and Statistics Group.

Basit Zafar is an economist in the New York Fed’s Research and Statistics Group.