The Odd Behavior of Repo Haircuts during the Financial Crisis

Since the financial crisis began, there’s been substantial debate on the role of haircuts in U.S. repo markets. (The haircut is the value of the collateral in excess of the value of the cash exchanged in the repo; see our blog post for more on repo markets.) In an influential paper, Gorton and Metrick show that haircuts increased rapidly during the crisis, a phenomenon they characterize as a general “run on repo.” Consequently, some policymakers and academics have considered whether regulating haircuts might help stabilize the repo markets, for example, by setting a minimum level so that haircuts can never be too low, as discussed in another paper by Gorton and Metrick. In this post, we discuss recent findings showing that the rise in haircuts wasn’t a general phenomenon after all—haircuts didn’t rise in every repo market. We also discuss why the divergence across markets is odd, and the implications for policymakers.

How Are Repos Traded in the United States?
There are two main segments of the U.S. repo markets: bilateral and tri-party. The bilateral market is an over-the-counter market where two parties meet, agree on the terms of a repo, and execute the trade between them. The tri-party repo market differs because a third party, called a clearing bank, acts as intermediary and alleviates some of the administrative burden between two parties engaging in a repo (see our aforementioned blog post for more details).

Haircut Behavior during the Crisis
Two known sources of data document an increase in haircuts in the bilateral repo market during the recent financial crisis. Gorton and Metrick describe data from an anonymous securities dealer for repos using low-quality collateral, such as asset-backed collateral, collateralized loan obligations, and collateralized debt obligations. These data show that haircuts between this firm and other high-quality dealers rapidly increased during the crisis, to the point where some types of assets were no longer accepted as collateral. Copeland, Martin, and Walker provide supporting evidence on the rise in haircuts in the bilateral market, based on a survey of large securities dealers that actively lend cash to their clients using repos, in a recent staff report.

In the tri-party repo market, though, Copeland, Martin, and Walker use confidential supervisory data to show that haircuts were roughly flat over the recent crisis. Krishnamurthy, Nagel, and Orlov provide supporting evidence, based on data they collected from SEC regulatory filings by money market mutual funds. The difference in the time series of haircuts across the bilateral and tri-party markets is substantial. The chart below plots the spread between median haircuts in various segments of the bilateral and tri-party markets for repos with overnight maturity and conditional on collateral type. The spread is positive for all collateral classes except Treasuries, and it increases with lower-quality collateral. After the Lehman Brothers bankruptcy, these haircut spreads rose rapidly, reaching more than 40 percentage points for subprime collateral. In general, the haircut spreads increased during fall 2008, peaked sometime in the first half of 2009, and were close to their July 2008 level at the beginning of 2010. 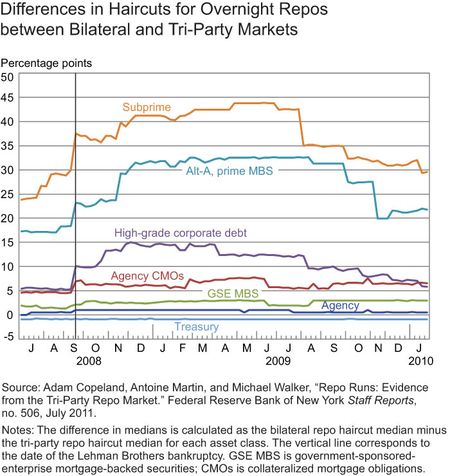 The different behavior of haircuts in the bilateral and tri-party repo markets is puzzling. These two markets are similar, with both using the same contractual form and the same types of collateral. The purpose of some transactions in both markets is similar—market participants have stated that financial entities use the two markets for funding purposes. These two markets are also tightly linked; the larger securities dealers operate in both markets and often provide intermediation services by rehypothecating into the tri-party repo market collateral received via bilateral repos. These linkages suggest that haircut behavior across the two markets should be similar.

What Does the Difference in Haircut Behavior Mean for Policymakers?
The behavior of haircuts in the bilateral repo market could be associated with a market-wide run, or at least a generalized run on some asset classes, as suggested by Gorton and Metrick. The same cannot be said for tri-party repos, however, because haircuts hardly changed. Rather, cash investors in tri-party repos seem willing to lend to securities dealers until the risk of default crosses a threshold. After a security dealer is perceived to have become too risky, cash investors simply stop lending.

The tri-party repo data are consistent with this view. As detailed in Copeland, Martin, and Walker, during the crisis, multiple securities dealers were able to borrow stable amounts of cash without changes in collateral type or haircuts, even after experiencing an adverse shock. An exception is Lehman Brothers; in the days before the firm declared bankruptcy, the quantity of tri-party repos had fallen rapidly. Nevertheless, even in that case, haircuts stayed roughly flat. Anecdotal evidence suggests that the Bear Stearns experience was similar to that of Lehman. We argue that this behavior is similar to traditional bank runs, in which liability holders withdraw their funding precipitously.

It’s important for policymakers to understand the different use of haircuts across these two repo markets, especially when considering policies designed to prevent runs on securities dealers. If cash investors actively manage haircuts, as we’ve seen in the bilateral repo market, then there’s a potential role for haircuts as an equilibrating mechanism to lower the probability of runs (see, for example, work by Martin, Skeie, and von Thadden). Furthermore, there might be a role for regulation of haircuts. But if cash investors don’t actively manage haircuts, as we’ve seen in the tri-party repo market, then there seems to be little to gain from regulating them, and other measures may be needed to minimize the risk or the consequences of runs.

Adam Copeland is a senior financial economist in the Federal Reserve Bank of New York's Research and Statistics Group.

Antoine Martin is an assistant vice president in the Federal Reserve Bank of New York's Research and Statistics Group.

The discrepancy should not be puzzling at all. Given the role of the triparty agent, changing of haircuts on the fly is much more difficult in a triparty arrangement, both from legal and operational standpoints. Also, dealers held more sway and were more aggressive in protecting themselves, so would attempt to raise haircuts on reverse repos (bilateral) and keep them stable on triparty.