« Compensation Growth and Slack in the Current Economic Environment | Main | Historical Echoes: Reverse Bank Run, Or When the Money Came Rollin’ In »

In a new working
paper
, Josh
Lerner
and I explore how the
venture capital (VC) model can be harnessed to achieve socially targeted ends
by examining the investment record of community development venture capital (CDVC)
firms. Our results are mixed. Investments made by CDVC firms are less likely to
succeed than are investments made by traditional VC firms. This lower
probability of success persists even after controlling for the fact that CDVC
firms invest in industries and geographies that have, on average, lower success
rates. However, we do find that CDVC firms have the benefit of bringing
traditional VC firms to underserved regions; controlling for the presence of
traditional VC investments, we find that each additional CDVC investment draws an
additional 0.06 new traditional VC firms to a region.

What Is Community Development Venture
Capital?
Broadly defined, community development venture capital is equity capital
invested with the goal of increasing economic opportunity and promoting
investments for underserved populations in distressed communities. In the
United States, these efforts can be traced back to the Small Business Investment
Company (SBIC) program, the
Minority Enterprise Small Business Investment Companies (MESBICs), and the
numerous community development corporations set up in response to the “War on
Poverty” in the 1960s, which sought to alleviate poverty through the
application of business principles.

We identify CDVC firms from two
sources. The Community Development Venture Capital Alliance has maintained a
roster of members on its website. We use the current and archived versions of
this list (obtained through web.archive.org). Additionally, the Treasury’s CDFI Fund has undertaken periodic
surveys of entities receiving its funds. We identify from these surveys all
CDFI funds that have made equity investments. We then match these lists of VC firms
against the firms identified in VentureXpert. Of fifty-seven potential CDVC firms identified, we match thirty-two VC
firms to VentureXpert. Twenty-eight of these firms have made U.S. investments
tracked by VentureXpert.

CDVC Firms Are Different from Traditional
VC Firms in Their Locations and Investments
We first examine how the composition of investments by community
development venture funds differs from those of traditional groups. We find
substantial differences: Community development fund investments are far more
likely to be in nonmetropolitan regions and in regions with little prior
venture activity. 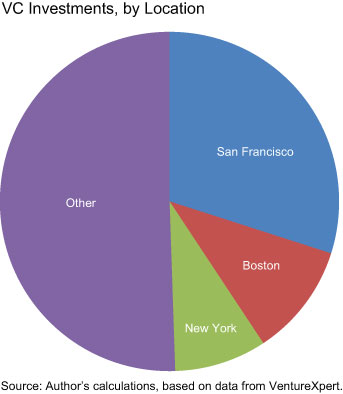 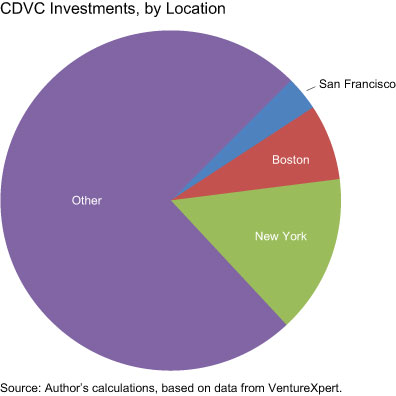 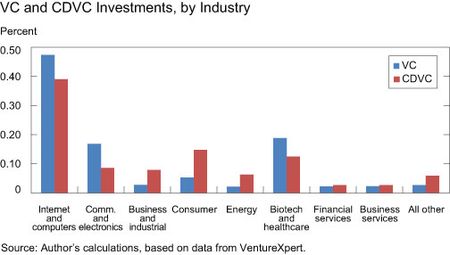 We find the CDVC sector to be
relatively small in terms of investments that are comparable to those made by
traditional VCs; in total, we find 305 investments by twenty-eight CDVC firms,
compared with more than 65,000 investments by more than 5,500 non-CDVC funds. We
also document several other significant differences between the two types of
funds and their investments.

The CDVC firms are more likely to
invest in earlier financing rounds, reflecting an orientation toward seed and
early-stage investing.

The firms backed by CDVC firms have
fewer venture investors participating in the rounds and have undertaken fewer
financing rounds in total. However, in part, this may reflect these firms’
relative youth (see below).

The CDVC-backed firms are
substantially less likely to have gone public (1 percent versus 13 percent) or
to be successful (18 percent versus 33 percent). Again, the relative youth of
these firms must lead us to be cautious in interpreting the results.

The CDVC-backed investments were
likely to occur later than non-CDVC investments even though we begin the sample
in 1996, reflecting the relative youth of the sector.

CDVC Firms May Have Broader Impact
Investment returns are not the only possible measure of success of CDVC
firms. While the relationship between the number of VC firms and the number of
VC investments in a region is inherently difficult to estimate, we investigate whether
the presence of CDVC firms and CDVC investments is associated with an increased
number of non-CDVC firms. Controlling for the presence of traditional VC
investments, we find that each additional CDVC investment results in an
additional 0.06 new traditional VC firms in a region. Of course, this result
must be interpreted cautiously because it is possible that CDVC firms are
simply investing in areas where traditional VC firms are planning to grow. If
CDVC firms really do increase the likelihood that traditional firms locate or
invest in underserved regions, they play an important indirect role in facilitating
economic growth. A number of papers document that traditional venture capitalists
play an important role in facilitating growth (see, for example, Kortum
and Lerner (2000).

Anna Kovner is a senior financial economist in the Federal Reserve Bank of New York’s Research and Statistics Group.